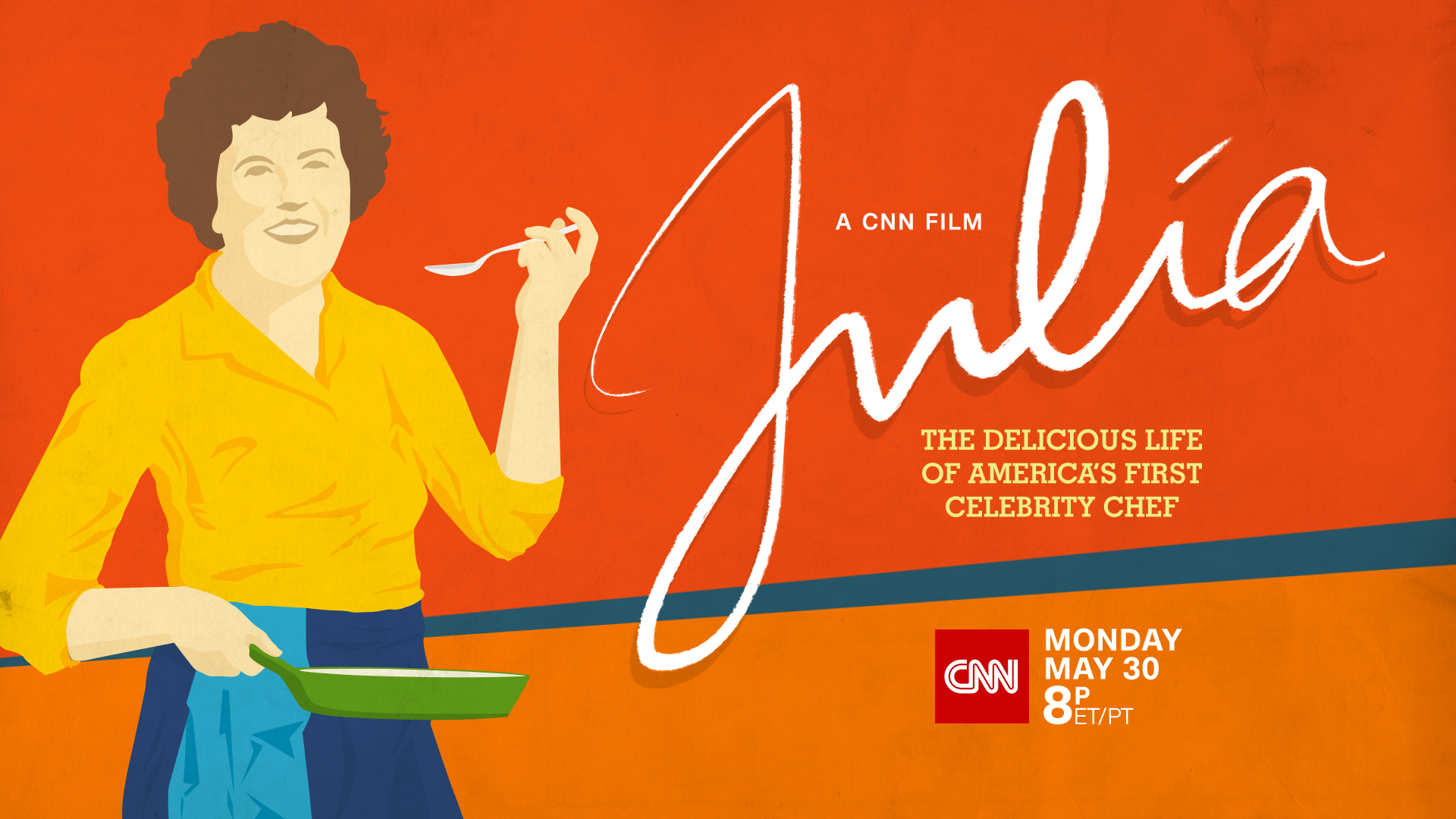 Academy Award-nominated Filmmakers Julie Cohen and Betsy West Stir Up A Profile Of The Chef, Cultural Ambassador, and Icon, Julia Child, for JULIA

JULIA, from Academy Award-nominated filmmakers Julie Cohen and Betsy West (RBG), will premiere for television on CNN on Memorial Day, Monday, May 30 at 8:00pm and 10:00pm Eastern (5:00pm and 7:00pm Pacific), with limited commercial interruption.  The documentary celebrates the life and career of chef, cookbook author, and television and cultural pioneer, Julia Child.

“Julia Child was an irresistible subject,” say filmmakers Betsy West and Julie Cohen, “and not just because of her charismatic, joie-de-vivre personality, and crying-out-for-imitation voice.  As a cookbook author and television chef, Julia had a profound impact on the way Americans think about food, about television, and about the possibilities for women.”

Sizzling with mouth-watering food cinematography, diced with never-before-seen archival film and photos, and interviews with those who knew her, the documentary captures the surprising, and quietly subversive, life of Julia Child.  Born to a well-to-do, conservative California family, Julia McWilliams worked in advertising after graduating from Smith College, and later in support roles for the OSS intelligence agency during World War II.  The film uses excerpts from the personal diaries of Julia McWilliams and Paul Child, to reveal their courtship and early marital adventures as they followed Paul’s foreign service assignments to Germany, Norway, and France, where she trained at the famed Le Cordon Bleu cooking school.

“Julia Child was a muse to so many of us who remember her hundreds of television appearances through the decades.  We hope viewers will be delighted to discover – or rediscover – a woman who defied all expectations, pursued her passions, and soared in midlife, particularly in a field considered to be a mostly male bastion,” said Amy Entelis, executive vice president for talent and content development for CNN Worldwide who alongside Courtney Sexton, senior vice president for CNN Films, is an executive producer for JULIA.

The film explores Julia Child’s nearly ten year toil of testing recipes and exchanging notes with two friends who shared her love of French food.  In 1961, the co-authors published the masterpiece, Mastering the Art of French Cooking (Knopf Doubleday), which has sold more than 2.5M copies to date.  It was during the promotional tour for the book in the U.S., at the age of 50, that Julia Child landed her legendary television show, The French Chef, and her extraordinary career took flight.

JULIA is heralded as a:

“this terrific documentary is about Julia’s manifold loves…Her phenomenally full life fills the film to the brim.” ~ Joe Morgenstern, WSJ

“an invigorating new documentary looks back on Julia Child and her influence on how Americans cook and eat” ~ Glenn Kenny, The New York Times

The documentary features contemporary interviews with a constellation of those who loved Child, including José Andrés; Child’s niece, Phila Cousins; Ina Garten; Charlie Gibson; Jacques Pépin; Child’s nephew, Alex Prud’Homme; Cecile Richards; Marcus Samuelsson; and many more.  Throughout JULIA, her family, colleagues, and admirers detail her vast, enduring influence upon American kitchens and culture.  “She made it (cooking) look like it was fun,” enthuses Garten in the documentary.

JULIA is directed by Julie Cohen and Betsy West, and produced by Holly Siegel and Imagine Documentaries’ Justin Wilkes and Sara Bernstein.  The film is executive produced by Imagine Entertainment’s Brian Grazer, Ron Howard, and Michael Rosenberg; Amy Entelis and Courtney Sexton of CNN Films; Oren Jacoby of Storyville Films; Alex Prud’homme; and Bob Spitz.  JULIA is produced with the full cooperation of Julia Child’s friends, family, and The Julia Child Foundation for Gastronomy and the Culinary Arts.  The world premiered of the film took place at the 2021 Telluride Film Festival, before its exhibition in theaters by Sony Pictures Classics.

During the May 30 premiere, JULIA, will stream live for subscribers on the CNN OTT app and via CNN.com and CNN mobile apps under “TV Channels.”  The film will be available on demand via CNN.com, CNN apps, and cable operator platforms beginning Tuesday, May 31.  While watching the film, viewers can comment and interact with other viewers across social media platforms by using the hashtag #JULIAmovie.