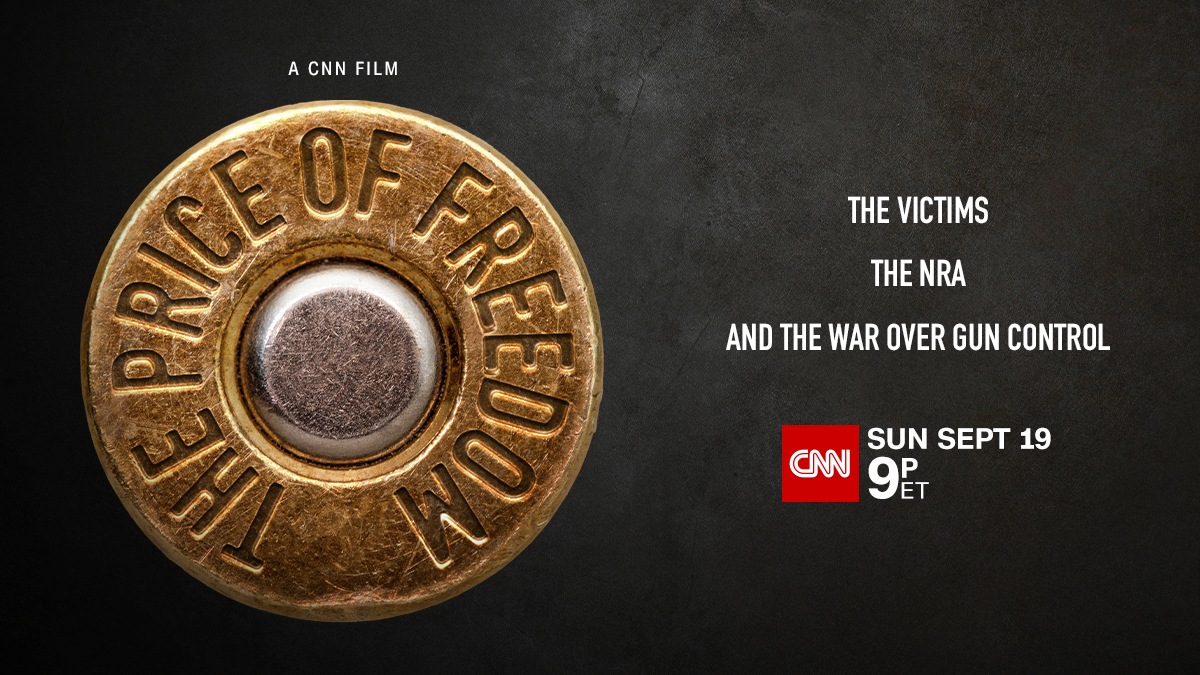 CNN Films Acquires THE PRICE OF FREEDOM From Flatbush Pictures and Tribeca Studios for Premiere on CNN Sept. 19

CNN Films today announced the acquisition of THE PRICE OF FREEDOM, produced by Tribeca Studios, in association with DICK’S Sporting Goods Films and Flatbush Pictures, and directed by Grand Clio, Cannes Lion, and Emmy® Award-winner Judd Ehrlich (Keepers of the Game, We Could Be King).  The documentary feature, which explores gun violence in America and the history of the National Rifle Association (NRA), previously premiered at Tribeca Festival in June and exhibited in theaters in July.

CNN will premiere THE PRICE OF FREEDOM on Sunday, Sept 19, beginning at 9:00pm EDT (6:00pm PDT), immediately followed by a roundtable discussion of the issues examined in the film for a special edition of Cuomo Prime Time, anchored by CNN’s Chris Cuomo.  THE PRICE OF FREEDOM, and the companion programming, will be presented on CNN without commercial interruption, and broadcast from 9:00pm EDT to 11:00pm EDT (6:00pm PDT to 8:00pm PDT).

“We’re thrilled to partner with CNN Films and bring this documentary to a wide audience,” said director and producer,  Judd Ehrlich, of Flatbush Pictures.  “The process of making the film and discovering how the National Rifle Association has seized the conversation around guns in America was both revelatory and disturbing.  The roots and ramifications of the NRA’s power are more consequential than we imagine, and my hope is that by unpacking how we got here, THE PRICE OF FREEDOM will bring new perspectives to the conversation around preventing gun violence in this country.”

“Bravo to CNN for bringing this critical conversation into American living rooms,” said Tribeca Enterprises chief content officer, Paula Weinstein, who leads Tribeca Studios.  “This powerful film places audiences in the center of one of this generations most important debates,” she said.

THE PRICE OF FREEDOM documents how the National Rifle Association (NRA), originally a nonpartisan sporting enthusiasts’ organization, evolved into a politically influential force that has shaped American policy and culture for more than five decades.  The film traces how the organization has responded to major inflection points in American history, recasting crime waves, political assassinations, mass casualty shootings, and landmark legislative moments as opportunities to expand greater access to guns.

THE PRICE OF FREEDOM and Cuomo Prime Time will stream live for subscribers via CNNgo (www.CNN.com/go and via CNNgo apps for AppleTV, Roku, Amazon Fire, Chromecast, Samsung Smart TV, and Android TV), and on the CNN mobile apps for iOS and Android.  Viewers can also find this content on demand via cable/satellite systems, CNNgo platforms, and CNN mobile apps through Sept. 29.

DICK’S Sporting Goods Films (“DSG Films”) is a producer of premium content that seeks to harness the power of our belief that every community has stories to tell that are central to the human experience. We create, acquire, sell, and distribute content that revolves around genuine, relevant, and meaningful insights about sports and communities. The Price of Freedom is DSG Films’ fifth feature film.

Note: This film was originally planned for premiere on 29 August but was pre-empted for live coverage of breaking news events.