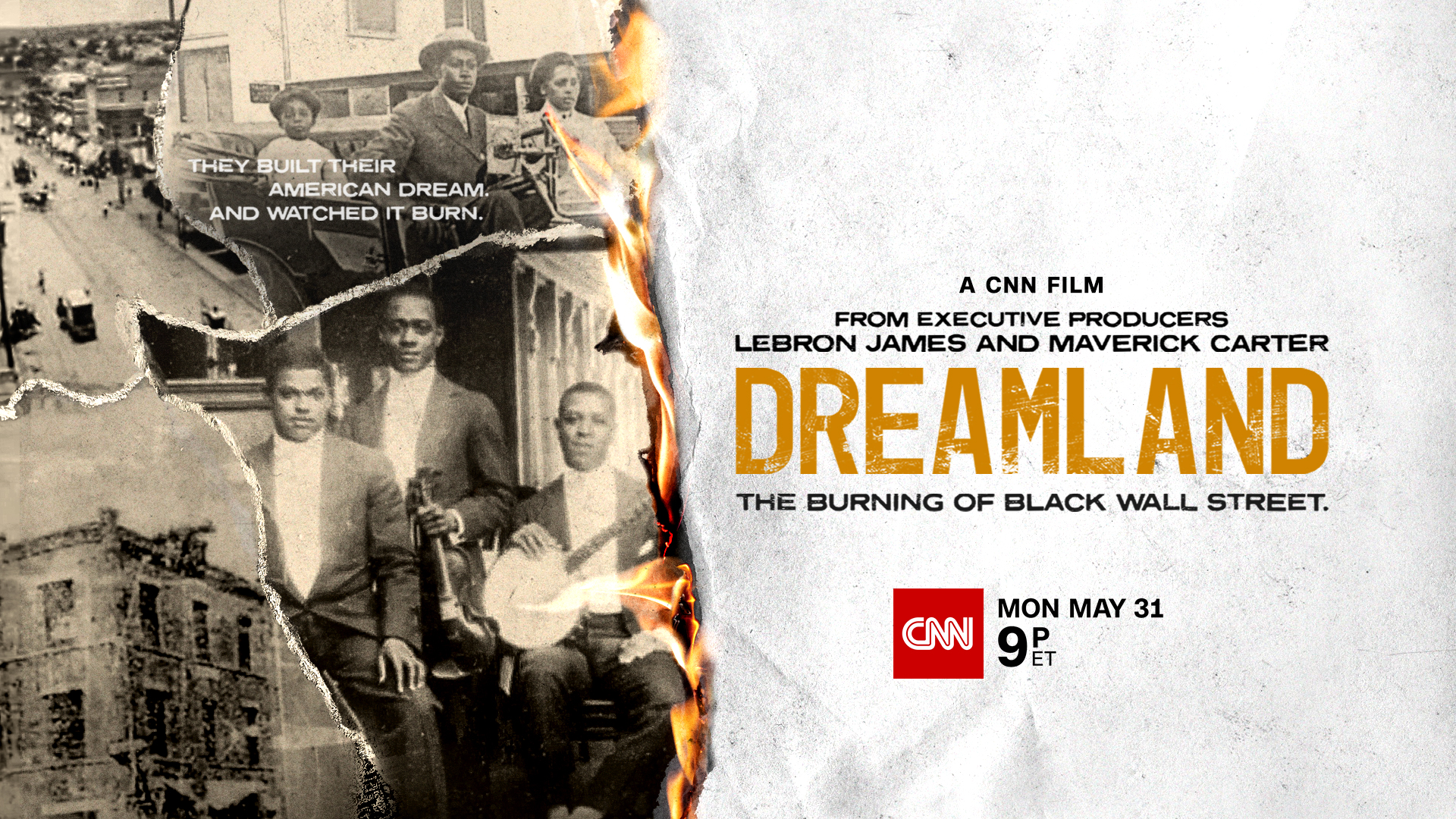 CNN Films’ ‘DREAMLAND: The Burning of Black Wall Street’ Produced by The SpringHill Company Premieres Monday, May 31 on CNN

The Salima Koroma-Directed Film Investigates the Black Renaissance in Greenwood, OK And The History Of An American Massacre

DREAMLAND: The Burning of Black Wall Street, executive produced by LeBron James, Maverick Carter, Jamal Henderson, and Philip Byron for The SpringHill Company, and Amy Entelis and Courtney Sexton for CNN Films, will premiere Monday, May 31 at 9:00pm Eastern on CNN and CNN en Español.  Directed and produced by Salima Koroma, the cinematic documentary celebrates the Black cultural renaissance that existed in the Greenwood district of Tulsa, OK, and investigates the 100-year-old race massacre that left an indelible, though hidden stain on American history.

Greenwood, a historic center of Black wealth, is the site of one of the nation’s most shocking mass murders.  Accounts vary, but a 19-year-old African American man was arrested after being accused of assaulting a 17-year-old white woman inside Tulsa’s Drexel Building.  After a white lynch mob was rebuked by African American World War I veterans, violent white vigilantes, some ‘deputized’ by local authorities, pursued and killed hundreds of Black men, women, and children in stunning acts of violence.  Businesses were burned.  Some marauders even flew airplanes to drop incendiary devices into Black residential areas.  More than 35 city blocks were razed.  Scores of Black residents needed shelter from the American Red Cross for weeks; many permanently fled the city.

During the May 31 premiere will broadcast on CNN and CNN en Español, DREAMLAND: The Burning of Black Wall Street will also stream live for subscribers via CNNgo (www.CNN.com/go and via CNNgo apps for AppleTV, Roku, Amazon Fire, Samsung Smart TV, and Android TV) and on the CNN mobile apps for iOS and Android.  The film will be available beginning Tuesday, June 1, on demand via cable/satellite systems, CNNgo platforms, and CNN mobile apps.  The film will encore Saturday, June 5 at 9:00pm Eastern.  HBO Max has acquired streaming rights to the film and will offer it for subscribers at a later date.

While watching DREAMLAND, viewers can comment and interact with others across social media platforms using the hashtag #DreamlandTulsa.

About The Spring Hill Company