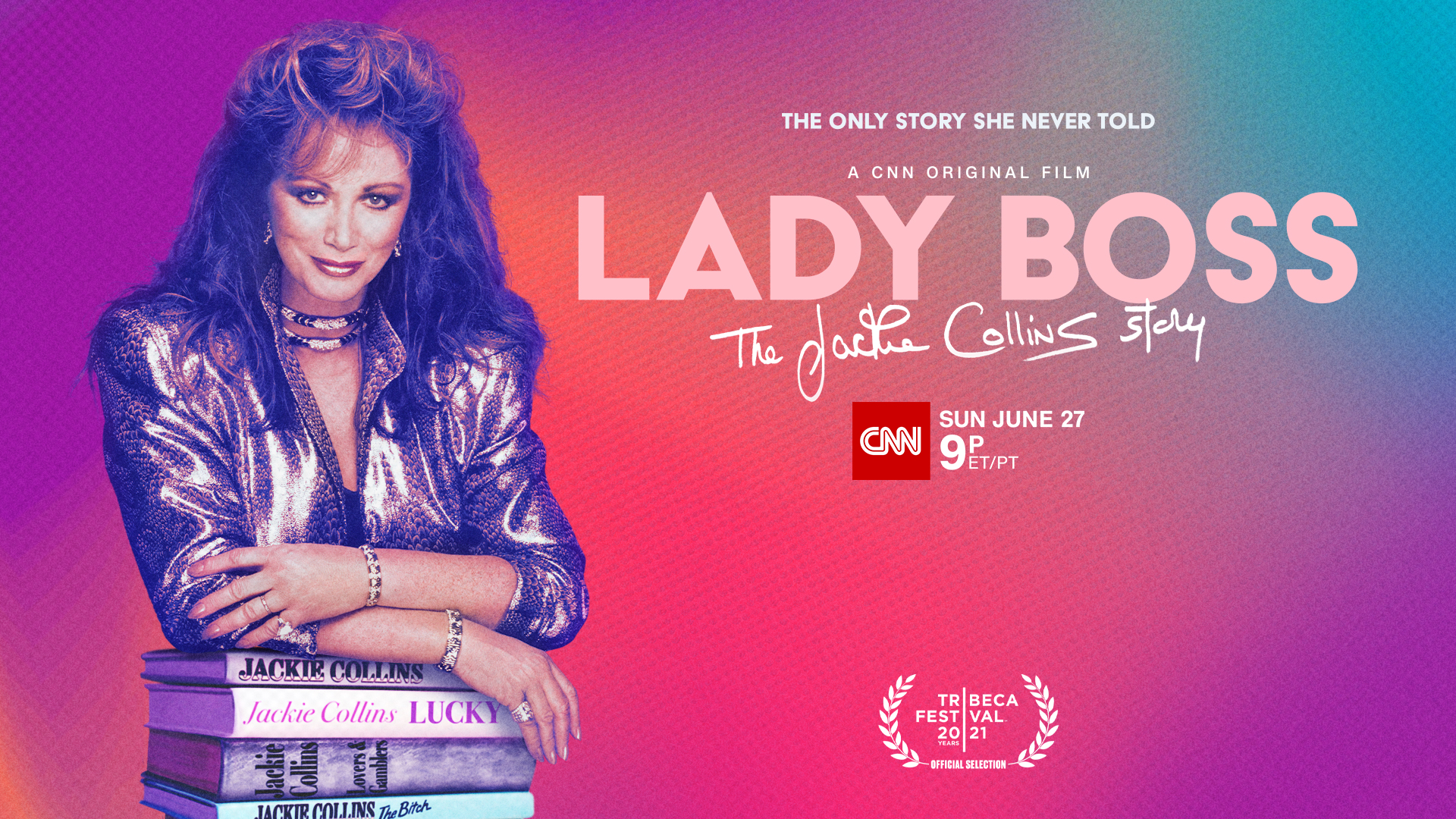 With more than half a billion copies of her 32 novels sold in more than 40 countries, eight of which have been produced as movies, Jackie Collins is one of the world’s most successful and celebrated authors.  Her writing boldly extolls female power, sexual pleasure, and freedom, often with the glamourous backdrop of Hollywood’s high society.  Her works such as Chances (1981), Hollywood Wives (1983), and The Santangelos (2015) have never been out of print and continue to delight generations of readers around the world, creating community among her fans, and generating debate among others over her self-styled brand of feminism.

LADY BOSS: The Jackie Collins Story, directed by Laura Fairrie and produced by John Battsek and Lizzie Gillett, is a Passion Pictures production for AGC Studios, CNN Films, and BBC Arts, in association with Ventureland.  The film is a definitive, cinematic portrait of the trailblazing author, mother, rebel, and icon.  LADY BOSS will have its world premiere on June 10 at Tribeca Film Festival, and will premiere for television Sunday, June 27, at 9:00pm ET and PT on CNN.

Fairrie crafts the intimate narrative of her film with family photographs, home movie footage, audio recordings of Collins’ novels, and even excerpts from Collins’ personal diaries.  Decades before ‘meToo,’ Collins talked of experiencing Hollywood’s ‘casting couch.’  Years later, Collins mined the not-all-that-glitters-is-gold world that she would come to dominate, fictionalizing many of the true tales of her Hollywood experiences for her novels.  Her legions of fans, many of whom learned about sex from reading her books, may relate to the novelist’s real-life loves, her early difficult marriage to Wallace Austin, and a later union with the love of her life, Oscar Lerman, who admiringly encouraged her career.  Years after Lerman’s passing, Collins declared she had entered a phase enjoying the company of ‘a man for every occasion.’

The film spans Collins’ life, beginning with a domineering father and a beloved, but sometimes distant mother.  Fairrie follows Collins through her final days, including a determined return to London for a farewell to her beloved siblings, actress Joan and Bill, her sister-in-law, Hazel, and her close circle of business confidants.  During that London visit, most did not realize Collins was in her final days of breast cancer, and had secretly lived with the devastating disease for six years.  Along the way, Fairrie interweaves interviews with Collins’ cherished daughters Tiffany, Tracy, and Rory, and dearest friends, to yield a sometimes surprisingly vulnerable portrait of a relatable and complex woman, behind the fan-craved chronicles of Hollywood scandals and sex.

Fairrie’s immersive documentary is a multilayered deliberation on feminism, sexuality, and family dynamics.  Viewers journey through the life of a novelist who blazed a revolutionary path, earning power and respect at the top echelons of Hollywood, and whose ‘Girls can do anything’ motto continues to inspire generations of readers.

During the June 27 broadcast premiere on CNN, LADY BOSS: The Jackie Collins Story will also stream live for subscribers via CNNgo (www.CNN.com/go and via CNNgo apps for AppleTV, Roku, Amazon Fire, Samsung Smart TV, and Android TV) and on the CNN mobile apps for iOS and Android.  The film will be available beginning Monday, June 28, on demand via cable/satellite systems, CNNgo platforms, and CNN mobile apps.  While watching LADY BOSS, viewers can comment and interact with others across social media platforms using the hashtag #LadyBossFilm.