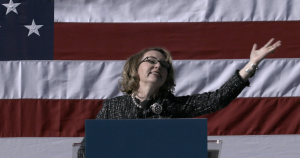 CNN Films and TIME Studios announced today they have teamed with Academy Award®-nominated and Emmy® Award-winning filmmakers Betsy West and Julie Cohen (RBG, Julia, My Name is Pauli Murray), and producers Lisa Erspamer and Sam Jinishian, for Gabby Giffords Won’t Back Down, a tender yet raw documentary about former U.S. Representative Gabrielle Giffords’ remarkable perseverance following a horrific 2011 assassination attempt that left her with partial paralysis and the language impairment, aphasia.  Home movies taken at the hospital, and current-day cinema verité filming, show Gifford’s painstaking and miraculous recovery from a gunshot to her head, and her path to becoming one of America’s most effective advocates for gun violence prevention.  The filmmakers also capture a remarkable love story.  Nine years after Giffords’ husband Mark Kelly gave up his job as a NASA astronaut to support his wife’s recovery, cameras follow an exuberant Gabrielle Giffords on the 2020 campaign trail supporting Kelly’s successful run for the U.S. Senate for Arizona.  Production of Gabby Giffords Won’t Back Down is near completion.

“Within minutes of meeting Gabby Giffords, we knew we had to make a film about this phenomenal woman,” said directors Cohen and West.  “The intelligence, humor, and toughness she brings to every personal and political challenge that comes her way makes Gabby not only an ideal documentary subject, but also a spectacular human being to spend time with,” they said of working with her for the film.

“We are so pleased to collaborate again with Betsy and Julie to tell the story of a remarkable woman,” said Amy Entelis, executive vice president for talent and content development for CNN Worldwide.  “They have beautifully showcased Gabrielle Giffords’ journey, one of strength and resilience in the face of tragedy,” Entelis said.

“Gabby Giffords Won’t Back Down is a triumphant portrayal of resilience, courage, and the power of the human spirit.  We could not be more thrilled to partner with the remarkable team of Betsy and Julie as they have created one of the most inspirational films of our time,” said Ian Orefice, president of TIME Studios.

On Jan. 8, 2011, U.S. Rep. Giffords was the target of an assassination attempt by a lone gunman while she was engaged in a constituency outreach event in Tucson, AZ.  Giffords was shot in the head.  In total, 13 people were wounded and six were killed, including a nine-year-old girl.

Gabby Giffords Won’t Back Down paints a detailed picture of Giffords’ journey, with new emotional interviews with former President Barack Obama, U.S. Sen. Kirsten Gillibrand, and U.S. Rep. James Clyburn, who recount Gabby Giffords’ promise as a rising star in politics prior to the shooting, the initial uncertainty about her survival, and her power as a compelling advocate for gun safety.  Still a gun owner herself, Gabby Giffords founded the gun safety organization, “Giffords,” following the Newtown, CT, shootings, and advocates at both the state and federal level for what she calls ‘common sense gun laws.’  “I’m not against guns,” she says, “I’m against gun violence.”  Along with her speech pathologist, Dr. Fabi Hirsch, she is also a leader with the nonprofit, “Friends of Aphasia.”

Cohen and West were granted unprecedented access to Gabby Giffords’ life, filming her daily rides on a customized recumbent bike, her French horn practice, and studying for an adult bat mitzvah.  Along with interviews with the couple, the film includes footage filmed by Kelly himself and interviews with Kelly’s daughters, Claudia and Claire; Gabrielle Giffords’ mother, Gloria Giffords; her surgeon, Dr. Dong Kim; her speech pathologists, Dr. Hirsch and Angie Glynn; and other survivors of the Tucson shooting.

CNN Films and Storyville Films previously partnered for JULIA, the surprising biography of chef, television star, and author, Julia Child, with Imagine Documentaries for Sony Pictures Classics, which was recently shortlisted in the Documentary Feature category for the 94th Academy Awards.  And, they partnered for the Academy Award®-nominated RBG, about the life and legacy of U.S. Supreme Court Justice Ruth Bader Ginsburg, released by Magnolia Pictures.  In addition, CNN Films is behind: CITIZEN ASHE, about tennis great and humanitarian Arthur Ashe, executive produced with HBO Max and released by Magnolia Pictures.  ROADRUNNER: A Film About Anthony Bourdain, executive produced with HBO Max, premiered in theaters with Focus Features.

The deal for Gabby Giffords Won’t Back Down was negotiated by Stacey Wolf, senior vice president of business affairs, and Kelly MacLanahan, assistant general counsel, both of CNN Worldwide, on behalf of CNN Films.  CNN Films acquired worldwide television rights to Gabby Giffords Won’t Back Down.  Other rights for the film remain available.  CAA Media Finance and UTA are co-representing the film’s worldwide rights.

The film also marks the latest collaboration between TIME Studios and CNN Films, who recently teamed up on the Emmy®-nominated documentary JOHN LEWIS: Good Trouble, directed by Dawn Porter.  The two companies have another project in production that has yet to be announced.  TIME Studios recently produced Countdown: Inspiration4, the defining real-time series for Netflix that chronicled the first-ever all-civilian mission into orbit.  Two additional projects include jeen-yuhs: A Kanye Trilogy, the intimate and exclusive trilogy of Kanye West that will debut in 2022, directed by Coodie and Chike, and Ricky Powell: The Individualist, which premiered in Dec. 2021.

From one of the most globally iconic brands, TIME Studios is an Emmy Award®-winning television, film and immersive studio focusing on the development, production and distribution of truth-based premium unscripted and scripted premium storytelling that moves the world. With technical innovation and a brand defining visual language that dates back 98 years, TIME Studios aims to impact communities and the world at large with ideas that forge true progress. Combining the industry’s leading creators with TIME, one of the most trusted brands that reaches an audience of over 100 million people globally, TIME Studios is uniquely positioned to bring massive audiences to the world’s most impactful stories. Recent projects include, Black Gold (Paramount+), Big Vape (Netflix), John Lewis: Good Trouble (CNN Films), Amazing Grace (Neon), Ricky Powell: The Individualist (Showtime), Mass Effect: The Story of YouTube, Kid of the Year (Nickelodeon/CBS), TIME 100 (ABC) and the first scripted project for TIME Studios, Women of the Year (Amazon).

About Lisa Erspamer Entertainment
Helmed by Emmy and Grammy-nominated producer Lisa Erspamer, Lisa Erspamer Entertainment (LEE) is a multi-platform, full scale production company specializing in creating innovative and emotionally connective original content for film, television and digital media. Based in Los Angeles and Nashville, the LEE team of award-winning producers, directors and creatives shares a passion for dynamic and immersive storytelling, developing and producing compelling and premium quality content with some of the biggest names in entertainment.  Founder Lisa Erspamer was Co-Executive Producer of The Oprah Winfrey Show and later as Chief Creative Officer and Executive Vice President of Programming and Development for OWN: The Oprah Winfrey Network.  She produced the documentary RUNNING FROM CRAZY about the Hemingway family which opened Sundance.  Other LEE projects include the Grammy, Critics’ Choice, NAACP and IDA-nominated theatrical documentary, WHITNEY, which premiered at the Cannes Film Festival, MY LIFE, the Amazon Studios documentary about Mary J. Blige and a forthcoming, four-part documentary film series on an American media icon.