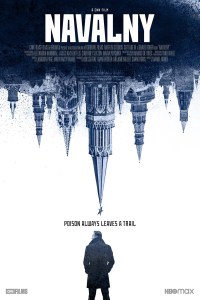 CNN Films and HBO Max, in association with Fishbowl Films, Raefilm Studios and Cottage M, announced they have partnered on Navalny, a revealing fly-on-the-wall documentary thriller by filmmaker Daniel Roher about anti-corruption Russian government opposition leader Alexey Navalny. Navalny survived an assassination attempt by poisoning with a lethal nerve agent in August 2020.  During his months-long recovery Navalny makes shocking discoveries about his assassination attempt and decides to return home.  Despite the risks to his personal safety, he willingly returned to Russia on January 17, 2021, and was arrested moments after landing in Moscow.  January 17, 2022, marks one year since Navalny was imprisoned for leaving Russia, related to a prior suspended sentence.

“We are grateful to have the opportunity to share Alexey’s gripping story with the world,” said Courtney Sexton, senior vice president for CNN Films. “With unmatched access to Alexey himself, Daniel and the entire team have masterfully delivered a fascinating, raw thriller.”

Daniel Roher, who directed the 2019 Toronto International Film Festival opening night film Once Were Brothers, said, “Having a front seat to history while shooting this film was a life-changing experience. I am grateful to CNN Films and HBO Max for their unwavering support and their commitment to amplifying the unbelievable story of one man and his fight against an authoritarian regime.”

In August 2020, a plane traveling from Siberia to Moscow made an emergency landing. One of its passengers, Russian opposition leader Alexey Navalny, was deathly ill.  He was taken to a local Siberian hospital and evacuated to Berlin, where the German government eventually determined he had been poisoned with Novichok, a lethal nerve agent implicated in attacks on other opponents of the Russian government.

Navalny and his team learned about the attempt on his life from the data investigative journalism outlet Bellingcat, which along with other international news organizations, including CNN, uncovered crucial details about the plot and its potential links to the Kremlin.  President Vladimir Putin denied any involvement in the attack, and accused news organizations that reported on the investigation of ‘information warfare,’ facilitated by foreign special services.  In Navalny, filmmaker Daniel Roher reveals a courageous and controversial would-be president at the precipice of sacrificing everything in order to bring reform to his homeland.

The deal for Navalny was negotiated by Stacey Wolf, senior vice president of business affairs for CNN Worldwide, on behalf of CNN Films and CNN+.  HBO Max, CNN+, and CNN Films hold streaming and broadcast rights for this film.

CNN Films is behind Julia, the surprising biography of chef, television star, author, and wartime spy, Julia Child, with Imagine Documentaries for Sony Pictures Classics, which was recently shortlisted in the Documentary Feature category for the 94th Academy Awards.  Additional projects include the Academy Award®– nominated RBG, about the life and legacy of U.S. Supreme Court Justice Ruth Bader Ginsburg and released by Magnolia Pictures; Citizen Ashe about tennis great and humanitarian Arthur Ashe is executive produced with HBO Max and released by Magnolia Pictures; Roadrunner: A Film About Anthony Bourdain executive produced with HBO Max, premiered in theatres with Focus Features; and LFG for HBO Max, which debuted on the streaming service in July 2021.