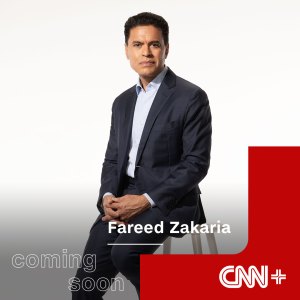 FLASHPOINTS WITH FAREED ZAKARIA TO DEBUT EXCLUSIVELY ON CNN+

CNN’s Fareed Zakaria will host Flashpoints with Fareed Zakaria for CNN+, the much-anticipated streaming subscription service that is set to launch in spring 2022. Zakaria will use his insightful expertise to decode the backstories of the power dynasties, revolutions, spy missions, missed opportunities, and history-shaping assassinations to help viewers understand how the world’s most dangerous people and places have arrived at transformational tipping points.

Filmed in a cinematic style that weaves rare archival footage with engaging contemporary interviews, Flashpoints is a new CNN Original Series, expected to begin streaming as an anthology later in 2022. Zakaria, who most recently won an Emmy® in 2021 for Outstanding News Discussion & Analysis and previously won a Peabody Award, is the host of Fareed Zakaria GPS, CNN’s flagship global affairs program that airs weekly on CNN around the world. He has written four New York Times bestselling books, and is a columnist for The Washington Post. His most recent book, Ten Lessons for a Post Pandemic World, has already been translated into 25 languages.

“This is the history behind the headlines, the stories, people, and forces that created the crises of today,” said Zakaria about Flashpoints.

Zakaria’s honors include being named to Foreign Policy magazine’s 2019 “Top 10 Global Thinkers of the Last 10 Years;” in 1999, Esquire magazine named Zakaria as one of “the 21 Most Important People of the 21st Century.” He has been awarded honorary degrees by many universities, from Harvard to Johns Hopkins to Ohio State. He has won the National Magazine Award for his columns.

“The intriguing backstories that we delve into for Flashpoints have power, betrayal, espionage, and assassination. The storytelling is naturally as thrilling as a John Le Carré novel…except it all really happened,” said Nancy Duffy, senior vice president of program development for CNN Worldwide, who oversees the Zakaria series for CNN+.

More information about Flashpoints with Fareed Zakaria, as well as more about the lineup for CNN+, will be available in the weeks to come. Set to debut in spring 2022, announcements made to date about CNN+ can be found via the CNN Press Room.