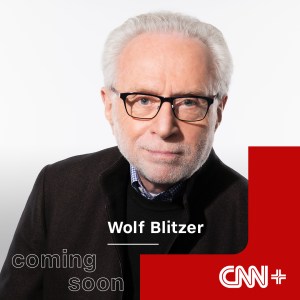 CNN anchor Wolf Blitzer will host The Newscast with Wolf Blitzer on CNN+, the much-anticipated streaming subscription service that is set to debut this spring. This nightly show will contribute to CNN+’s slate of original, live programming and be available at launch.

On The Newscast, Blitzer will give it to you straight, hitting the headlines you need to know on this traditional evening news show with a sleek, modern twist. The old-school nostalgic approach featuring original reporting from around the world, investigations, and consumer focused stories that matter help put the latest headlines in perspective.

Wolf Blitzer is anchor of CNN’s The Situation Room, which provides viewers with in-depth reports about the political, international, and breaking news stories of the day. During the 2020 election cycle, he moderated several Democratic presidential town halls, as well as CNN’s January debate in Iowa. Blitzer also anchored special coverage of Election Night in America surrounding the 2020 election, which lasted several days until CNN was the first to project Joe Biden as the winner and Blitzer was the one to announce the projection. He has also played a critical role in the network’s expanded coverage of the coronavirus pandemic, often anchoring seven days a week during the peak of the pandemic in 2020.

Blitzer has been with CNN for over 30 years having joined in 1990 as the network’s military-affairs correspondent at the Pentagon. He then served as CNN’s senior White House correspondent covering President Bill Clinton from November 1992 election until 1999, when he became the anchor of CNN’s Sunday public affairs program Late Edition with Wolf Blitzer and remained for more than a decade. Throughout his career, Blitzer has interviewed some of history’s most notable figures, including U.S. Presidents Barack Obama, George W. Bush, Bill Clinton, George H.W. Bush, Ronald Reagan, Jimmy Carter, and Gerald Ford.

More information about The Newscast with Wolf Blitzer and CNN+’s full lineup will be available in the weeks to come. CNN+ talent announcements made to date can be found on the CNN Press Room.