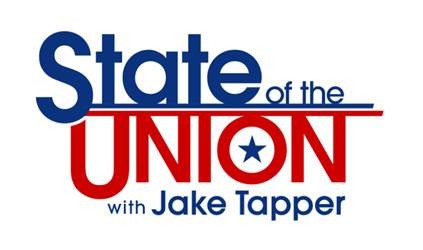 For more information, see http://cnnpressroom.blogs.cnn.com/. Also, text highlights and a transcript of the discussion are below.

Sanders denies involvement with protestors: To talk about our organization or our campaign disrupting his meeting is a lie.  Were there some people there?  There were thousands of people, as I understand it.  Some of them were supporters of mine, but, certainly, absolutely, we had nothing to do, our campaign had nothing to do with disrupting his meeting.

Sanders on Clinton’s Nancy Reagan remarks: So, I’m not quite sure where Secretary Clinton got her information.  I’m glad she apologized, but the truth is, it was not President Reagan and Nancy Reagan who were leaders in talking about this issue, quite the contrary.  They refused to allow that discussion to take place.  They didn’t get involved in it while so many fellow Americans were getting sick and dying.

JAKE TAPPER, CNN HOST: And Senator Bernie Sanders joins me now.  Senator, thanks for joining us.

TAPPER:  So, Donald Trump said Saturday that some of the people who disrupted his rally in Chicago — quote — “represented Bernie, our communist friend.”  You just heard him say that.

TAPPER:  And then, this morning, he issued something of a warning to you on Twitter.

He wrote: “Bernie Sanders is lying when he says his disrupters aren’t told to go to my events.  Be careful, Bernie, or more my supports will go to yours.”

SANDERS:  Well, for a start, Mr. Trump should be — we should take Mr. Trump’s words with a grain of salt, because I think, as almost everybody knows, this man cannot stop lying about anything.

I think what you see, Jake, is a man — and even his Republican colleagues make this point — his language, his intonations, when he talks about carrying people out in stretchers, when you see at his rallies people sucker-punch folks, kick people when they’re down, this is a man who keeps implying violence, and then you end up getting what you see.

So, I think that he, in fact, has got to tell his supporters that, in the United States of America, you don’t go beating up people, that people have a right to peacefully protest.  And I hope that become the tone of his campaign.

People are catching on to Donald Trump.  That’s why he’s getting reckless.

TAPPER:  So, the group People for Bernie, which I understand is not an official campaign group, but it is a group of your supporters, they were claiming at least partial credit for shutting down the Trump rally, that it wasn’t just luck.

This is a tweet of theirs.  “It took organizers from dozens of organizations and thousands of people to pull off.  Great work.”

Now, I get protesting, but the goal here of these protests seem to be to stop the rally from happening.  And I’m wondering if you have any concerns…

TAPPER:  … about supporters of yours stopping Donald Trump from exercising his First Amendment right to speak.

Look, you have just indicated there were many, many, many organizations.  We learned about this when we saw it on television.  Our campaign had nothing to do about it.

I think people have the right to protest.  I do not like people disrupting anybody’s meetings.  And I would hope that my supporters will not disrupt meetings.  To protest is one thing.  To disrupt is something else.

But, once again, Trump is not telling the truth.  It should not surprise anybody.  He very rarely tells the truth when he says that our campaign disrupted his meeting.  It was not.  We have millions of supporters, and people do things, but it was not our campaign.

TAPPER:  But, just to be clear, any violence, any disruption that is inappropriate from any of your supporters, you denounce and you would tell your supporters not to do that?

But I also think — and, again, this is not just me talking.  This is people in the Republican Party.  As I understand it, Jake, Donald Trump’s own campaign manager is now up on charges for assaulting a female reporter, bruising her.

I mean, this is a campaign whose rhetoric, whose people now, because I think of that rhetoric, are leaning too much in the direction of violence.

And Trump himself, I think, is the primary cause of this.  He has absolutely got to tone it down.

TAPPER:  Let’s turn to the race here in Ohio for the Democratic presidential nomination.

Your rival, Hillary Clinton, went after you this weekend on the issue of health care reform.  Take a listen.

HILLARY RODHAM CLINTON (D), PRESIDENTIAL CANDIDATE:  We’re going to pull together and stand up against those powerful forces.

And, more broadly, what did you think of Hillary Clinton’s management of the health care reform effort in the ’90s?

SANDERS:  Well — well, I think that, you know, Secretary Clinton is getting a little bit nervous.

She lost last week in Michigan.  I think she understands that the momentum in this campaign and the energy is with us, and that we have a good chance to win a number of states on Tuesday.

By the way, I think we have a photograph out there somewhere of me standing literally right next to Hillary Clinton in her efforts to bring health care reform back in the 1990s.  So, what she’s saying is not entirely accurate.

But what I do say and what I have said throughout this campaign is that, while the Affordable Care Act has done a lot of good, we have got to go further.  We have got to join the rest of the industrialized world, guarantee health care to all people, take on the drug companies in — who are ripping off the American people in an unconscionable way, charging us the highest prices in the world for medicine.

One out of five Americans can’t even afford medicine.  So, I believe, as I have said throughout this campaign, that health care is a right of all people.  We have got to move to a Medicare-for-all health care system.

TAPPER:  You won Michigan.  You say part of that is because of your position against trade deals that have hurt American workers.

NAFTA is obviously a big issue here in Ohio.  Is it fair to go after Hillary Clinton for a trade deal that her husband signed into law?

SANDERS:  Jake, that would not be fair.

But the truth is that Hillary Clinton herself spoke out time and time again in strong support of that disastrous piece of legislation.  I have helped lead the effort, almost from my first days in Congress, against NAFTA, later against permanent normal trade relations with China.

The facts are — this has nothing to do with Bill Clinton.  The facts are that Hillary Clinton has vigorously supported almost every piece of disastrous trade legislation this country has seen, legislation which has cost us millions of decent-paying jobs and led to a race to the bottom.

I have opposed those pieces of legislation, helped lead the opposition to them, because I understood that American workers should not be forced to compete against people in Mexico or people in China who are making pennies an hour.  That’s unfair.

If elected president, we are going to bring about major reforms to our trade policies.  Corporations are going to start investing in the United States of America, creating jobs here, not in China.

Hillary Clinton and I have a strong difference of opinion and a different record regarding trade.

TAPPER:  Hillary Clinton provoked something of a backlash on Friday from some of her supporters in the LGBT community after she praised Nancy Reagan’s work on HIV and AIDS.  Take a listen.

CLINTON:  It may be hard for your viewers to remember how difficult it was for people to talk about HIV/AIDS back in the 1980s.

And because of both President and Mrs. Reagan, in particular Mrs. Reagan, we started a national conversation, when, before, nobody would talk about it, nobody wanted to do anything about it.

TAPPER:  Hillary Clinton has since apologized for these — those remarks and said it was a mistake.

What did you make of that?

SANDERS:  I just don’t know what she was talking about.

In fact, that was a very tragic moment in modern American history.  There were many, many people who were dying of AIDS.  And, in fact, there was demand all over this country for President Reagan to start talking about this terrible tragedy.  And yet he refused to talk about it while the AIDS epidemic was sweeping this country.

So, I’m not quite sure where Secretary Clinton got her information.  I’m glad she apologized, but the truth is, it was not President Reagan and Nancy Reagan who were leaders in talking about this issue, quite the contrary.  They refused to allow that discussion to take place.  They didn’t get involved in it while so many fellow Americans were getting sick and dying.

TAPPER:  You will permit me one horse race question, sir.

SANDERS:  Well, you know, Jake, as you know, a lot of the states that have come up so far — and I should tell you, we have won nine primaries and caucuses, most of them by very wide margins.

Also, Jake, I would say that, as the campaign progresses and if, if we do well in a number of states, and if the general sentiment becomes that Bernie Sanders is the candidate who will defeat Donald Trump — and all of the polls — virtually all of the polls have me doing better against Trump than Hillary Clinton — I think a lot of those superdelegates who are today pledged to Hillary Clinton may say, what’s most important is defeating Trump or the Republican nominee.  Bernie Sanders is the candidate to do that.  We’re going to swing over to Bernie.

TAPPER:  All right, Senator Sanders, I will see you later today.

Our thanks to Senator Sanders just then.