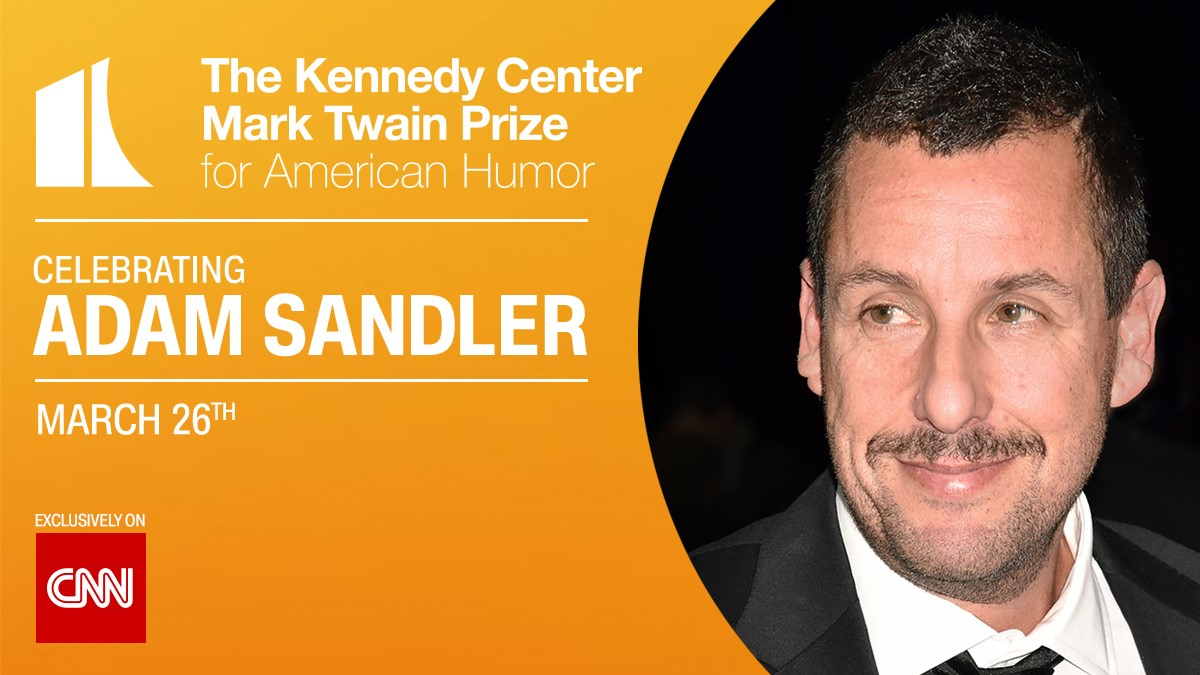 CNN will exclusively broadcast the 24th Mark Twain Prize for American Humor ceremony celebrating Adam Sandler, in partnership with The John F. Kennedy Center for the Performing Arts. The live ceremony will be held at the Kennedy Center Concert Hall in Washington, DC, on Sunday, March 19, and the program will air in full exclusively on CNN on Sunday, March 26 at 8pET.

The Mark Twain Prize for American Humor recognizes individuals who have had an impact on American society in ways similar to the distinguished 19th-century novelist and essayist Samuel Clemens, best known as Mark Twain. The ceremony celebrating Adam Sandler will also feature a cast of icons from across the entertainment industry including Jennifer Aniston, Judd Apatow, Drew Barrymore, Steve Buscemi, Conan O’Brien, Chris Rock, David Spade, and more.

“The Mark Twain Prize ceremony is one of the most uplifting, entertaining events of the year, and I am thrilled CNN is partnering with the Kennedy Center to broadcast it to our global audience,” said Chris Licht, Chairman and CEO of CNN Worldwide. “Humor has an amazing capacity to unite people, and for more than two decades, The Kennedy Center’s Mark Twain Prize has honored those who do it best. I look forward to sharing this evening of laughter and celebration with our viewers.”

“We are excited to partner with CNN in this annual tradition of celebrating as well as poking fun at a remarkable artist,” said Deborah F. Rutter, Kennedy Center President. “The Mark Twain Prize is a perfect fit for CNN because it showcases a quintessential Washington, D.C. event that brings together politicians from both sides of the aisle, performers, and audiences of all backgrounds for an evening of laughter. This new joint venture extends our reach as well as broadens CNN’s programming—a true win-win in a city where that phrase is not so common!”

The John F. Kennedy Center for the Performing Arts is America’s living memorial to President Kennedy. It is the nation’s busiest performing arts facility and annually hosts more than 2,000 performances for audiences totaling nearly 2 million; Center-related touring productions and television and radio broadcasts welcome 40 million more. The Center presents performances of music, dance, and theater, supports artists in the creation of new work, and serves the nation as a leader in arts education.

The 24th Mark Twain Prize for American Humor celebrating Adam Sandler will stream live for pay TV subscribers via CNN.com and CNN OTT and mobile apps, or CNNgo where available.