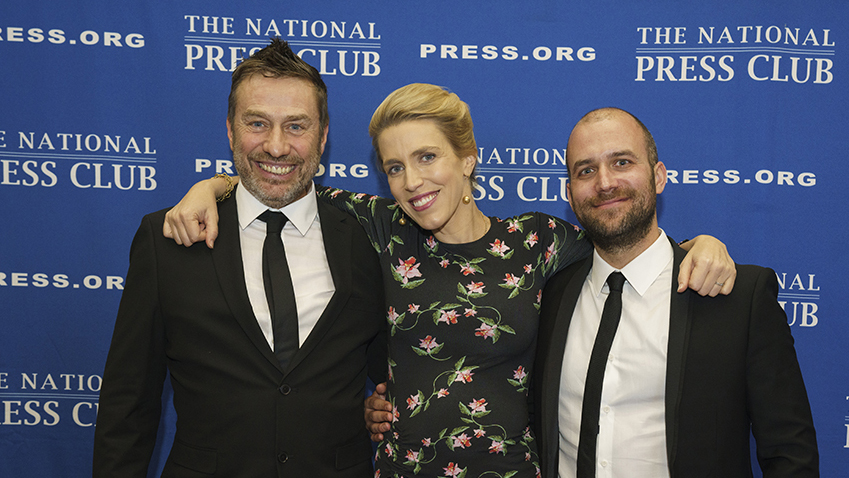 The Fourth Estate Award – which is the top honor bestowed on a journalist by the National Press Club Board of Governors – recognizes journalists who have made significant contributions to the field.

The evening also honored Rana Ayyub and Josh Renaud, winners of the John Aubuchon Press Freedom Awards, and PBS FRONTLINE, which received the 2022 Neil and Susan Sheehan Award for Investigative Journalism for its Local Journalism Initiative.

In her acceptance speech, Ward said: “In addition to curiosity, tenacity and grit, I believe that humanity and compassion can be among the most important tools that a journalist can have. Even when you are operating in conflict zones and dangerous and difficult places – where your life and the lives of the people you’re talking to are at risk – being able to pause, to be quiet, to listen, to be gracious, to be human and to be compassionate can actually be more powerful than being loud, angry and bombastic.”

She continued: “I’m so humbled to be here alongside Rana and Josh and the incredible grace and grit and determination that you have shown to continue your work – it’s an inspiration.”

Speaking at the event, CNN Chairman and CEO Chris Licht said: “[Clarissa] is the embodiment of the mission of CNN — whether it’s reporting from the streets of Kabul or Kyiv, her work is courageous, it is smart, it is independent and it is incredibly impactful. When I consider what makes our network different than other news organizations in the world, my mind immediately jumps to the journalists like Clarissa and her team, senior field producer Brent Swails and longtime CNN photojournalist Scott McWhinnie. Those three are among the best in the business.”

The gala event raises a large portion of the operating expenses for the National Press Club Journalism Institute, the Club’s nonprofit affiliate that provides training, promotes an engaged global citizenry through an independent and free press, and equips journalists with skills and standards to inform the public in ways that inspire a more representative democracy. Learn more here.