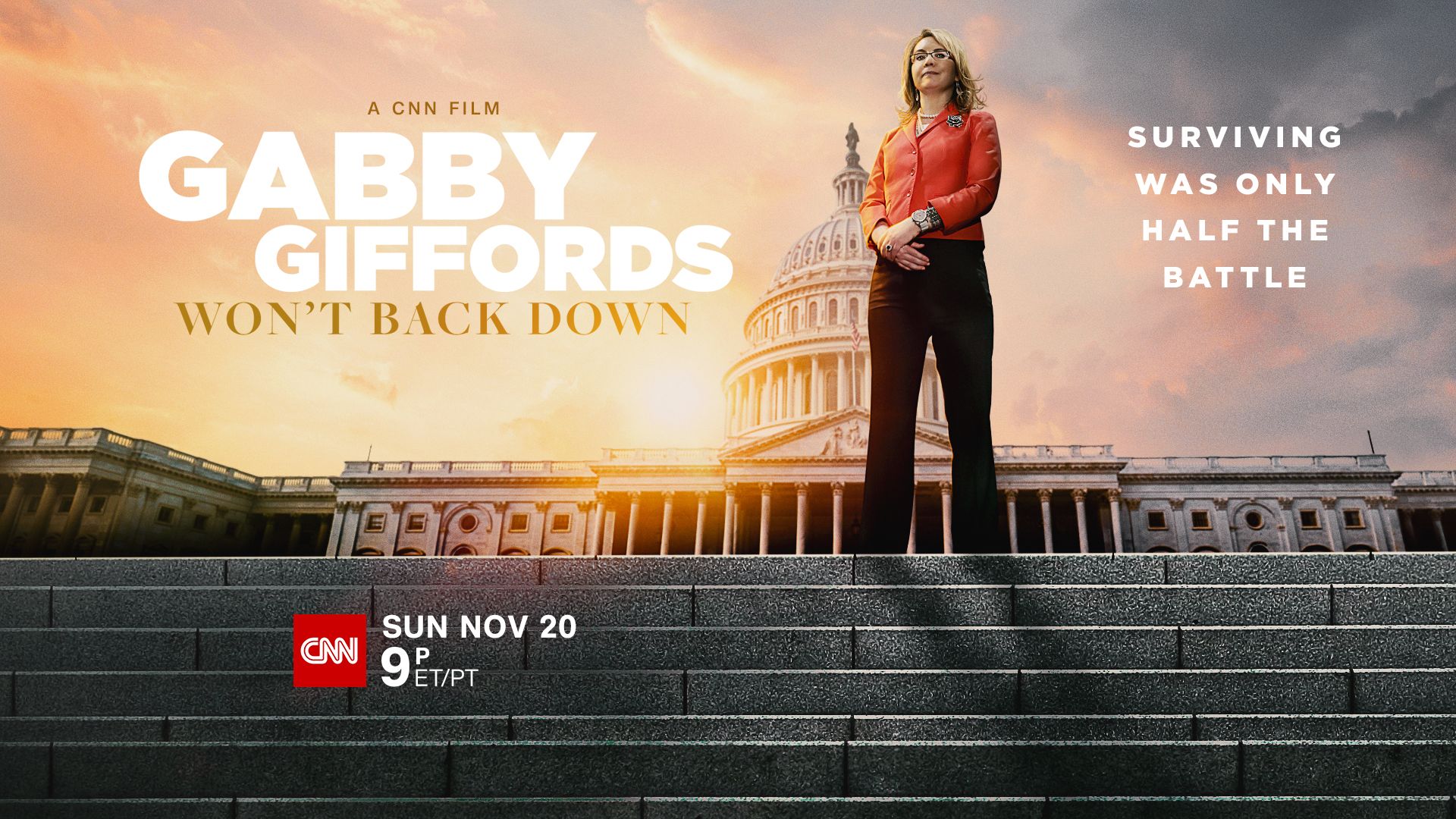 GABBY GIFFORDS WON’T BACK DOWN Premieres for TV Sunday, November 20

Latest Documentary from the Directors of RBG Broadcasts on CNN at 9:00pm ET & PT,

CNN Films will premiere GABBY GIFFORDS WON’T BACK DOWN for television on Sunday, Nov. 20, 2022, at 9:00pm Eastern and Pacific on CNN.  Directors Julie Cohen and Betsy West reveal new, personal perspectives on the assassination attempt and recovery of former U.S. Rep. Gabrielle Giffords, following a devastating mass shooting event that wounded 13, and killed six people in Tucson.  Central to the film is the exceptional access to the former Congresswoman; her husband, U.S. Sen. Mark Kelly; their family members; eyewitnesses to the shooting; and, Giffords’ medical team, secured by producer Lisa Erspamer.

“We’ve had the huge honor of telling the stories of some extraordinary American women, but Gabby Giffords’ story astounded us more than any other.  We can’t wait for viewers to get to know this fierce, joyful, inspiring force of nature,” said West and Cohen.

In the days following the shooting, Kelly, reflecting in an interview for GABBY GIFFORDS WON’T BACK DOWN, says he knew his wife would have questions about what happened to so dramatically change their lives.  He decided to film their journey during her recovery, documenting her surgeries, her first words, a visit by the President of the United States, and her grueling physical therapy and speech therapy, in home videos.  Cohen and West skillfully blend Kelly’s footage, and their own, showing Giffords’ progress during her recovery.  The documentary captures moments of agonizing frustrations, and moments of joy, as Giffords and Kelly reclaim their lives.  And, West and Cohen follow Giffords as she begins her work with GIFFORDS, an organization she founded to improve gun safety.

“Former Rep. Giffords and her husband, Sen. Mark Kelly, have fought their way back from tragedy to support each other through her recovery and their shared new mission,” said Amy Entelis, executive vice president for talent and content development for CNN Worldwide, on behalf of CNN Films.  “Julie and Betsy have revealed another amazing, woman-centric story that reminds us all of the power of love.”

GABBY GIFFORDS WON’T BACK DOWN was executive produced by Entelis and Courtney Sexton for CNN Films, Alexandra Johnes and Ian Orefice of TIME Studios, and Oren Jacoby of Storyville Films.  Lisa Erspamer of Lisa Erspamer Entertainment is producing the film along with Sam Jinishian of Storyville Films.  CNN Films previously collaborated with West and Cohen for the Academy Award-nominated, Emmy®-winning RBG, and the acclaimed documentary, JULIA.

GABBY GIFFORDS WON’T BACK DOWN is currently nominated in the “Best Documentary Feature” and “Best Political Documentary” categories for the Critics Choice Documentary Awards and has a 100% Tomatometer® score at Rotten Tomatoes.  It was theatrically released by Briarcliff Entertainment.  During the Nov. 20 premiere on CNN, GABBY GIFFORDS WON’T BACK DOWN will also stream live for pay TV subscribers via CNN.com and CNN OTT and mobile apps under “TV Channels,” or CNNgo where available.  The film will also be available On Demand beginning Monday, Nov. 21, to pay TV subscribers via CNN.com, CNN apps, and Cable Operator Platforms.  While watching the film, viewers can comment and interact with others across social media platforms using the hashtag #GABBYMovie.