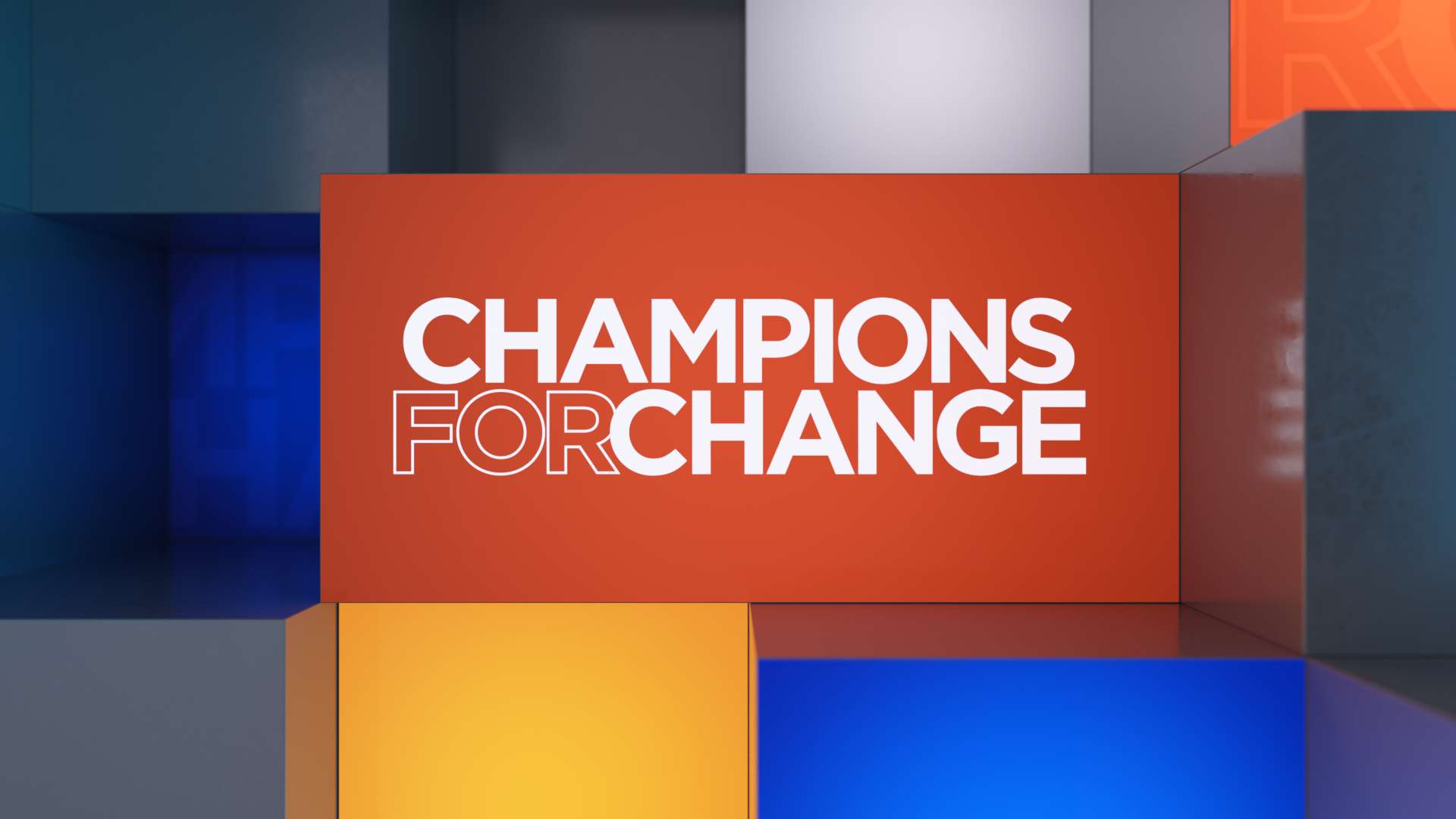 Beginning Sunday, September 18, CNN will air Champions for Change, a week-long special event highlighting bright examples of humanity who give hope and inspiration. In a year full of covering tough news, CNN’s anchors and reporters tell the uplifting stories of 12 community champions they admire. Along the way, they uncover personal moving details about the champions, and follow the ripple effects of these remarkable individuals who are changing the world, sometimes through a single act. Twelve of CNN’s top talent profile changemakers who tackle challenges through innovation and grit — and go on to help others.

This year’s Champions for Change include:

Victor Blackwell shows us two champions tapping into music’s power to evoke empathy, spark collaboration and promote racial harmony. Trey Carlisle and Todd Mack started The Black Legacy Project to form racially diverse groups of musicians who build understanding by creating modern interpretations of historically Black songs. Through roundtables and performance, The Black Legacy Project enables musicians of different backgrounds to listen to one another, recognize their interdependence and inspire their audiences to do the same.

From cheering on the Buffalo Bills to keeping up with his hometown news, Wolf Blitzer is a loyal son of Buffalo. Blitzer shows us how Buffalo Bills lineman Dion Dawkins is a champion on the football field and off. Dawkins’ support of the Buffalo community helped ease heartbreak in the wake of the deadly mass shooting at the Tops supermarket and he continues to set an empowering tone across some of the city’s most impoverished neighborhoods.

With two daughters of her own, Kate Bolduan worries about tainted pain pills young people are buying at an alarming rate. Ed and Mary Ternan run Song for Charlie, a non-profit dedicated to awareness of counterfeit prescription pills sold online, targeting teens. This illegal, but shockingly accessible, drug market traffics fake Xanax and Percocet, often spiked with deadly levels of fentanyl. These poisoned ‘fentapills’ are fueling a disturbing trend in overdose deaths, which claimed the Ternan’s son, Charlie, in 2020.

Since the invasion of Ukraine began, Erin Burnett has unflinchingly explored the harrowing personal stories of loss and survival. She spotlights the Velychko siblings – two brothers and a sister – who emigrated from Ukraine years ago, and now help refugees escape their war-torn country and resettle in the U.S. The Velychkos coordinate with several aid groups and individuals, but the effort requires tremendous sacrifice by the siblings, opening their personal homes and giving of their own limited resources.

Former collegiate runner Ana Cabrera laces up her track shoes with some determined Brooklyn girls and their dedicated champion. Jean Bell and her Jeuness Track Club are channeling girls’ energies, building self-confidence, and creating life-changing opportunities through the sport of running. Bell’s own running prowess led to a college scholarship. Today, when she’s not hearing cases as a courtroom judge, Bell presides trackside in the disadvantaged neighborhood where she grew up, mentoring girls to run against the wind.

CNN anchor Alisyn Camerota’s passion for law enforcement stems back to her time as a justice correspondent. Now she introduces us to a top cop in the state she calls home. Chief Foti Koskinas and his Westport, Connecticut police force are restoring faith in American law enforcement with innovative community involvement. The beloved local Chief immigrated to the US as a boy, speaking no English, and grew up to be a nationally esteemed law enforcement visionary.

For two decades, Anderson Cooper covered the war in Afghanistan and the people who fought it. He profiles retired Navy SEAL Jimmy Hatch, who was frustrated by America’s tumultuous exit from Afghanistan last year, and now works to ensure mistakes in “America’s longest war” are not repeated in future conflicts. Hatch is currently one of the oldest undergraduates at Yale University. That’s where the 55-year-old co-taught a graduate seminar working with ambassadors and generals that continues to influence new policies for American military projection.

As a surgeon and journalist, Dr. Sanjay Gupta knows firsthand the despair of patients desperately awaiting organ transplants. But he is hopeful about a possible breakthrough for the thousands of people needing new hearts. Molecular biologist Doris Taylor is developing a groundbreaking way to engineer custom hearts using a patient’s own stem cells. It’s the culmination of painstaking decades-long research and extremely delicate lab work. There’s still more work to do, but Dr. Taylor envisions her technology curing the number one killer of men, women and children worldwide: heart disease.

Poppy Harlow recently earned a Master of Studies in Law at Yale University, where one unassuming guest lecturer turned out to be a relentless fighter for justice. Attorney Stephen Bright combats capital punishment for convicts he feels would not be facing the death penalty were they not ‘”the poorest of the poor.” His decades of activism have slowly built a legacy of like-minded human rights lawyers and grateful former clients who now lead productive, free lives.

Don Lemon is passionate about artists who express our current struggles and triumphs. He interviews Rashid Johnson, who is a strong Black voice in contemporary art and who promotes and guides artists who have traditionally faced barriers of access to cultural institutions. A master of both visual expression and mentorship, Johnson advocates for identity and culture, making sure all of our history gets told through art.

Adam Kisielewski / Homes For Our Troops

As a journalist who has reported on and written extensively about the U.S. military, Jake Tapper cares deeply about veterans. He profiles a fellow board member of a nonprofit that builds specially adapted, mortgage free homes for severely wounded veterans of the wars in Iraq and Afghanistan, Homes For Our Troops. Retired Marine Sgt. Adam Kisielewski lost two limbs in Iraq, and tells Jake how, after he received his own Homes For Our Troops house in Maryland in 2011, he has been given a chance to pursue an education, work, be a better dad and husband, and now helps serve the organization that has done so much for him and hundreds of other veterans.