CNN SPECIAL REPORT: DEEP IN THE POCKETS OF TEXAS 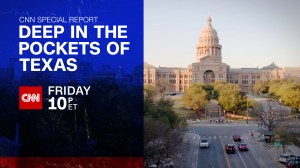 In the hour-long CNN Special Report: DEEP IN THE POCKETS OF TEXAS airing Friday, June 24 at 10pmET, Ed Lavandera reveals how a handful of influential billionaires steer the politics of school boards, city councils and the state legislature in Texas.

Texas is one of only 10 states with no limitations on campaign donations to candidates, and as a result, a few wealthy donors with strong religious views have an outsized influence on the government for approximately 30 million people. In a state known for its independence, Texas is usually at the forefront of legislation – and its conservative Republicans tell Lavandera that what’s happening now goes beyond ideology.

Lavandera speaks with sources on the record for the first time about how a small number of extremely wealthy citizens fund campaigns of little-known candidates who back their ideology against insufficiently conservative lawmakers. In addition to financing candidates, they fund political action committees and the scorecard by which legislators are ranked, maneuvering lawmakers to take positions espoused by the billionaires. Even by Texas’ conservative standards, the state has adopted some of the most stringently conservative legislation ever seen in the state’s modern history. In the new special, Lavandera explores how the ambitions of these few influential Texans are poised to expand beyond the state lines.

DEEP IN THE POCKETS OF TEXAS airs on CNN on Friday, June 24 at 10pmET.