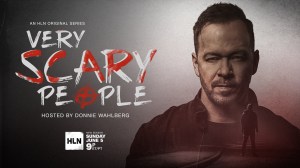 Los Angeles (May 31, 2022) – Actor and singer Donnie Wahlberg returns to host the fourth season of Very Scary People, an HLN Original Series that chronicles the twisted lives of some of the most frightening, diabolical characters in recent history. Each two-hour episode traces the heinous, criminal acts of these elusive miscreants and the eventual road to justice.

Wahlberg’s impressive career spans television, film, and music, capturing the attention of audiences worldwide. He also currently stars on the hit CBS drama Blue Bloods and is touring with his band New Kids on the Block.

Very Scary People is an HLN Original Series and part of the network’s internally developed programming dedicated to true crime, mysteries, and investigations. Nancy Duffy, senior vice president of program development for CNN, is the executive producer of the series.

The premiere season of CNN Audio and HLN’s Very Scary People podcast reached #1 across all podcasts in Apple Podcasts charts, as well as #1 in the true crime podcast category, holding the position for several weeks. Hosted by Donnie Wahlberg, the first season of the podcast takes listeners to Amityville and inside the twisted and enigmatic story of the DeFeo family, unpacking how a grisly mass murder became an iconic haunted tale.

The Ken and Barbie Killers (June 5)

One of North America’s most haunting and horrific crime sprees was a series of rapes, abductions, and murders of young women just north of the U.S.–Canada border from 1987 to 1992. Ontario authorities joined FBI profilers to hunt the monster responsible, but they came up empty handed for more than five years until one tip led cops to an unlikely suspect: a middle-class accountant living with his beautiful wife in a quaint pink house in the suburbs. They were sure they had their man, but the saga was far from over. Disturbing videotapes were discovered, and the public learned the sordid details of the crimes and who else was involved, sending shockwaves throughout the world.

The Back to School Killer (June 12)

When college-aged women in Charlottesville, Virginia started disappearing, the community was shaken to its core. The search for answers led authorities to an unlikely suspect, a local star athlete named Jesse Matthew Jr. In a story filled with twists and turns, the viewer goes behind the investigation of how he kidnapped and killed at least two young women, and how a third cheated death and became the key to bringing a murderer to justice. For the first time, you’ll hear explosive and heart-wrenching details from victims’ families and friends.

Sammy “The Bull” Gravano was one of the most feared mobsters in history. As the right-hand man to mafia kingpin John Gotti, he carried out multiple murders on behalf of the crime family. But after his arrest, he committed the ultimate mafia sin: he broke the sacred oath of silence and cut a deal with the government—agreeing to testify against his former boss. In shocking testimony, Gravano described the cold-blooded murders of close friends and business partners and the secret world of La Cosa Nostra. As the highest-ranking mobster ever to defect, The Bull’s testimony helped put Gotti and dozens of others behind bars and devastated the hierarchy of organized crime. After the trial, Gravano was supposed to slip away quietly under the Witness Protection Program with a new name and a new face. But the notorious gangster was not about to live a normal life. Despite the bounty on his head, Gravano abandoned the Witness Protection Program and drifted back into the criminal world. Sammy Gravano is one of the last mobsters of a bygone era and his journey from Bensonhurst, Brooklyn to the mafia’s inner circle, to government informant, and then to prison, is a riveting tale of murder, betrayal, and survival.

In the fall of 1977, the bodies of young women begin piling up in Los Angeles. Almost all were nude, showing signs of torture, and discarded on hillsides. Overnight, the city became gripped with terror as the press dubbed the perpetrator “The Hillside Strangler.” As the killings escalated, police received reports that two suspicious men were spotted flashing police badges and asking women to pull over. Suddenly, detectives realized that they were facing not a single serial killer but a pair working in tandem. Even more terrifying: the perpetrators may be members of law enforcement. A large task force was formed, but every lead went nowhere. Then, in late February 1978, after ten women had been slaughtered, the killings inexplicably stopped. Nearly another year passed before two murders more than 1,200 miles away opened the door to a bizarre family saga that ultimately uncovered the identity of the Hillside Stranglers.

It was just a normal night for 18-year-old Samantha Koenig. She was closing the coffee kiosk where she worked in Anchorage, Alaska—like she had done many times before—when one last customer came in: a man known in the community as a local business owner and caring father. But lurking beneath that anodyne surface was a rapist and a ruthless killer with a penchant for selecting random victims throughout the country. Israel Keyes’ kidnapping of Koenig led to an intense manhunt and a cross country investigation that ended his reign of terror. While in custody, Keyes played cat and mouse with detectives, revealing some details about his crimes and his missing victims. In the end, Keyes had one last surprise.

Nicknamed the “Dapper Don,” on account of his expensive suits and swagger, John Gotti was one of the biggest celebrities of the 1980s. But the real John Gotti was a man to be feared—a ruthless gangster who ordered hits on enemies and friends alike, as well as anyone else who crossed him. In the 70s, Gotti worked his way up the ranks of the Gambino crime family as a solid earner and vicious capo determined to not let anything or anyone stand in his way. Gotti’s big move came in 1985, when he organized the brutal murder of then Gambino boss Paul Castellano and took Castellano’s throne as the new Gambino godfather, making him public enemy #1. Everyone from law enforcement to other goodfellas considered Gotti dangerous and unpredictable. And for years he seemed unstoppable. This episode explores how this common street thug became the godfather of one of the world’s most powerful crime families, and how a secret FBI operation finally brought him down.