The Emmy Award-winning Stanley Tucci: Searching for Italy Debuts with New Episodes on Sunday, March 13 at 9pm ET/PT on CNN 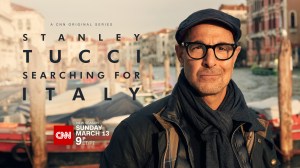 NEW YORK (January 20, 2022) – CNN announced today its full slate of new and returning CNN Original Series to premiere on the cable network in 2022. The new CNN Original Series include LBJ: Triumph and Tragedy, Nomad with Carlton McCoy, Patagonia: Life at the Edge of the World, The Last Witness: Watergate (wt), and UFOs (wt).

Winner of the 2021 Emmy Award for Outstanding Hosted Nonfiction Program, Stanley Tucci: Searching for Italy, will return for a second season on Sunday, March 13 at 9pm on CNN. In addition, the Emmy Award-winning series, United Shades of America with W. Kamau Bell, will return for its seventh season this Spring and the ninth season of This is Life with Lisa Ling will return this Fall.

“CNN’s Original Series have set CNN apart from all of its nonfiction competitors for almost a decade now,” said Jeff Zucker, Chairman, WarnerMedia News and Sports & President, CNN Worldwide. “And this year, CNN will present its most dynamic lineup yet, complete with historical, lifestyle, travel and personality series, all led by the incomparable Stanley Tucci. We can’t wait for the audience to devour all of it.”

“In our tenth year of CNN Original Series, we are delighted to bring new talents, new genres of storytelling, and new seasons of audience favorites to our CNN viewers,” said Amy Entelis, EVP for Talent & Content Development, CNN Worldwide.  “Smart and entertaining projects remain the sweet spot for CNN Original Series programming, and we believe this year’s dynamic slate will deliver.”

The 2022 CNN Original Series include:

LBJ: Triumph and Tragedy — From CNN Original Series and Bat Bridge Entertainment, a new four-part series offers a captivating look at one of the most consequential and enigmatic presidents in American history: Lyndon Baines Johnson. As a master of the political process, he is responsible for passing some of the most significant pieces of legislation in modern history. But while he was reshaping the social fabric of America, he was simultaneously escalating a war that would rip the country apart at the seams.  Weaving together dramatic first-hand accounts from the last surviving members of LBJ’s inner circle, never-before-broadcast archival material and LBJ’s own voice from secretly recorded audio tapes, Emmy Award-winning director Pat Kondelis crafts an intimate portrait of a larger-than-life figure, who left behind a complicated and polarizing legacy.  In recognition of the annual Presidents’ Day holiday, LBJ: Triumph and Tragedy premieres over two consecutive nights with back-to-back episodes on Sunday, February 20 at 9pm ET and Monday, February 21 at 9pm ET on CNN.

Stanley Tucci: Searching for Italy – In the second season of this critically acclaimed series, Academy Award nominee and Emmy Award-winning actor Stanley Tucci indulges his passion for Italian cooking as he explores the stories and people behind the world’s most popular cuisine. From the hearty, traditional dishes in Umbria to the unique cuisine of Venice, Tucci continues his journey to understand Italy’s culture and history through its food. Produced by RAW, the second season will premiere in two parts in 2022. The first installment of Stanley Tucci: Searching for Italy premieres on Sunday, March 13 at 9pm ET/PT on CNN. The second half of the season will premiere this fall on CNN.

Nomad with Carlton McCoy — Carlton McCoy is on a journey of discovery. Join the classically trained chef, master sommelier, and arbiter of cool on his quest to find the places where food, music, art, and culture collide. From the bustling streets of Seoul to the riverside towns along the Mississippi River, this six-part documentary series chases what it means to be authentic, celebrating the similarities and differences across the world to illuminate the universal threads that connect us all. At times deeply personal, McCoy uncovers the wellspring of new ideas, talent, and creation that has formed in some of the world’s most well-known destinations. Produced by Zero Point Zero Production, Nomad with Carlton McCoy premieres Sunday, March 13 at 10pm ET/PT on CNN.

Patagonia: Life at the Edge of the World — Produced by Plimsoll Productions, Patagonia: Life at the Edge of the World explores the wonders of one of the last untouched places on earth, the far-off land of Patagonia in South America. Narrated by Chilean-born actor Pedro Pascal (The Mandalorian, Game of Thrones), this immersive six-part series showcases Patagonia’s diverse and spectacular landscapes, traveling along its coastline from wind-blown deserts to pristine fjordlands, from deep inside its magical, ancient forests up to the high peaks of the Andes. With cutting-edge technology and help from local experts, we tell the compelling stories of the wildlife and the people who have evolved to live across Patagonia’s varied lands. Filmed over one dramatic year, this captivating series reveals what it takes to survive at the edge of the world. This is Patagonia like you’ve never seen it before. Patagonia: Life at the Edge of the World premieres this Spring on CNN.

The Last Witness: Watergate (wt)— On the 50th anniversary of the infamous break-in that started it all, CNN Original Series and Herzog & Co put John Dean back on the witness stand.  Through revealing interviews, the former White House counsel divulges more than he ever could under oath, shedding new light on the back-channeling, the back-pedaling, and the backstabbing. Over the course of this four-part series, Dean will confront his own involvement in the biggest presidential scandal of the 20th century. The Last Witness: Watergate (wt) premieres late Spring 2022 on CNN.

UFOs (wt) — UFOs (wt) unspools the secret history behind the American government’s decades long investigation into the existence of Unidentified Aerial Phenomena. From the creators of the hit series Surviving Death, this provocative five-part series investigates what the government shared with the public versus what went on in the shadows; how citizens investigated cases and pushed back for more transparency; and what the future holds for this mystery which is now formally under investigation by the US government. UFOs (wt) premieres this Summer on CNN.