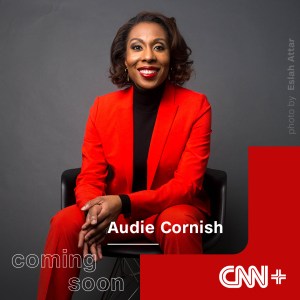 HOST OF WEEKLY CNN+ SHOW AND PODCAST FOR CNN AUDIO

Audie Cornish is joining CNN as an anchor and correspondent for CNN+, the much-anticipated streaming subscription service that is set to debut this spring. Cornish will host a weekly CNN+ show and contribute to CNN+’s slate of live programming. She will also host a new podcast for CNN Audio and will appear on CNN covering national, political and breaking news.

“I am very excited to join CNN and the CNN+ team. There are fresh stories to be told and new ways to tell them,” said Cornish. “CNN has a dynamic system of reporters and storytelling channels. I am thrilled to be a part of it.”

Cornish joins CNN after two decades in journalism, most recently as a recognized and trusted voice on the airwaves as co-host of NPR’s flagship news program, All Things Considered. She joined NPR’s National Desk in 2005, reporting from Nashville, covering the aftermath of Hurricane Katrina in Louisiana and other news in the Southeastern United States. Cornish later joined the NPR politics team in Washington to cover the 2008 presidential race and the historic election of President Barack Obama. Named host of Weekend Edition Sunday in 2011, she earned a George Peabody Award for her work with David Isay’s StoryCorps 9/11 Project, and in 2020, the National Press Foundation recognized her work with the Sol Taishoff Award for Excellence in Broadcast Journalism. Her feature reporting on the opioid crisis in Baltimore earned a Salute to Excellence Award from National Association of Black Journalists.

“We are thrilled to welcome Audie to CNN+ and CNN Audio,” said Andrew Morse, EVP & Chief Digital Officer of CNN Worldwide and Head of CNN+. “Her voice has been such an important part of the lives of so many people, and the perspective, integrity and grace that have been hallmarks of her career will make her such an important addition to our teams.”

Her interview subjects have ranged from stars such as singer Bruce Springsteen, to political figures such as former President Barack Obama and Senator Ben Sasse, to literary icons like Ta-Nehisi Coates.

Cornish will be based in CNN’s Washington, DC bureau and starts in February.

More information about Cornish’s CNN+ show, podcast and CNN+’s full lineup will be available in the weeks to come. Previous CNN+ announcements can be found here.