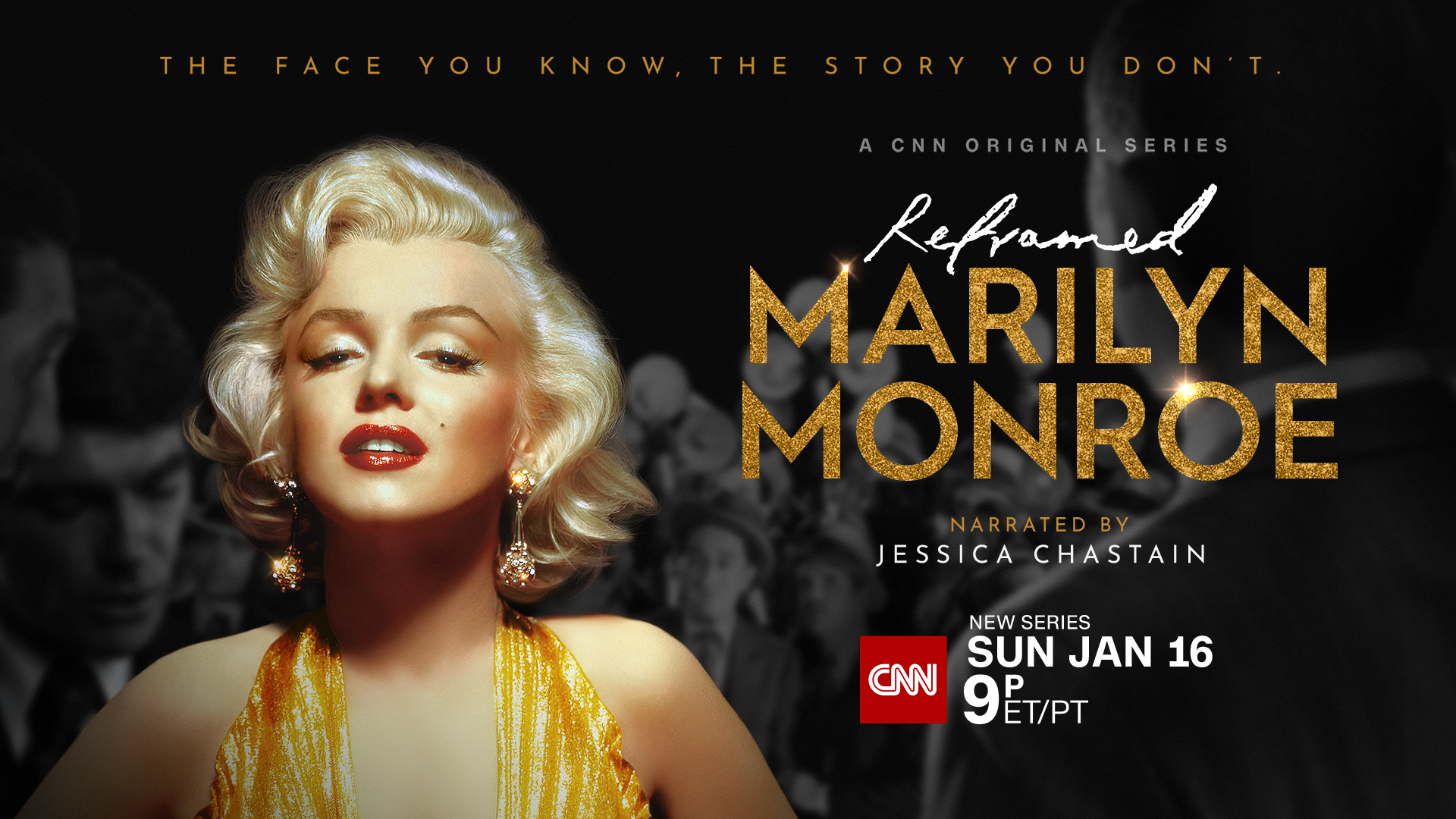 NEW YORK (January 5, 2022) – From CNN Original Series and RAW, a new four-part documentary series reclaims the life and legacy of Hollywood bombshell Marilyn Monroe to reveal a new story, of a complex and powerful woman ahead of her time. Reframed: Marilyn Monroe premieres Sunday, January 16 at 9PM ET on CNN with two hours of back-to-back episodes. Produced by the award-winning, London-based RAW and narrated by Golden Globe-winning actress and Molly’s Game star Jessica Chastain, the series features a star-studded cast of female voices and is made by an all-female editorial team led by filmmaker Sam Starbuck of RAW. Over four episodes it re-examines Monroe’s story to uncover themes of feminism, sexuality and power that continue to drive the cultural conversation today.

Immortalized as a sex icon, dismissed as a tragic victim, Reframed: Marilyn Monroe dismantles the conventional narrative to tell the tale of a woman who refused to conform to societal pressures in her pursuit of a career. The series retraces Monroe’s story from budding starlet to Hollywood power-broker, as she navigates the treacherous waters of Hollywood’s casting couch culture and bravely speaks out about abuse at a time when silence was the norm.

Inspired by the book The Many Lives of Marilyn Monroe by Professor Sarah Churchwell, the biographical series showcases rare archival footage combined with first person accounts from women close to Monroe such as friend Amy Greene; expert analysis from writers who have studied her like Vulture critic Angelica Jade Bastien and film critic Christina Newland; and anecdotes from actresses who have been inspired by her including Ellen Burstyn, Amber Tamblyn and Mira Sorvino.

“The legend of Marilyn Monroe has endured for decades, but we wanted to examine the woman behind the legend,” said Amy Entelis, EVP for Talent & Content Development for CNN Original Series and Films at CNN Worldwide. “The series reveals aspects of Monroe that pay tribute to the pioneer she was and shows how her story connects to the struggles women face in Hollywood today.”

Reframed: Marilyn Monroe joins a roster of premium nonfiction content from CNN Original Series and represents the latest production in a years-long partnership with RAW which has developed for the network the top-rated docuseries Stanley Tucci: Searching For Italy, Race for the White House, American Dynasties: The Kennedys and The Bush Years as well as the award-winning documentary feature Three Identical Strangers. “We were excited to work with CNN again on this project to re-evaluate the life and legacy of this complex, fascinating woman.” said Sam Starbuck, executive producer for RAW TV. “She was a trailblazer, courageously challenging the misogyny of 1950’s America in ways that feel modern today. She took on the male powerbrokers in Hollywood and won, becoming the most famous and recognizable woman in the world.”

Reframed: Marilyn Monroe will air over back-to-back weekends on Sunday, January 16 and Sunday, January 23 at 9PM and 10PM ET/PT. Episodes will also stream live for subscribers via CNNgo (www.CNN.com/go and via CNNgo apps for AppleTV, Roku, Amazon Fire, Chromecast, Samsung Smart TV, and Android TV) and on the CNN mobile apps for iOS and Android. The docuseries will be available On Demand the day after the linear premiere via cable/satellite systems, CNNgo platforms, and CNN mobile apps.

Executive producers for the documentary are Amy Entelis and Lyle Gamm for CNN Original Series; for RAW, Sam Starbuck is Executive Producer and Kate Leonard-Morgan is Head of Production, U.S.

About RAW
London based film and television company RAW is the global producer of premium documentaries and docuseries including the recent Netflix hits Fear City: New York vs The Mafia, Catching Killers, The Ripper and Don’t F**K With Cats, as well as the award-winning feature films Three Identical Strangers, American Animals and The Imposter.  RAW, an All3Media company, produces Discovery’s highest-rated show Gold Rush; for CNN, RAW has also produced the Emmy winning Stanley Tucci: Searching for Italy as well as ratings hits Race for the White House, American Dynasties: The Kennedys and The Bush Years, and the feature doc The Lost Sons. RAW’s most recent U.K. TV credits include Paddy and Christine McGuinness: Our Family and Autism, the award-winning BBC documentaries Nadiya: Anxiety and Me, Drowning in Plastic.  It’s feature films Dream Horse and Encounter also premiered in cinemas in 2021, RAW’s 20th anniversary. www.raw.co.uk