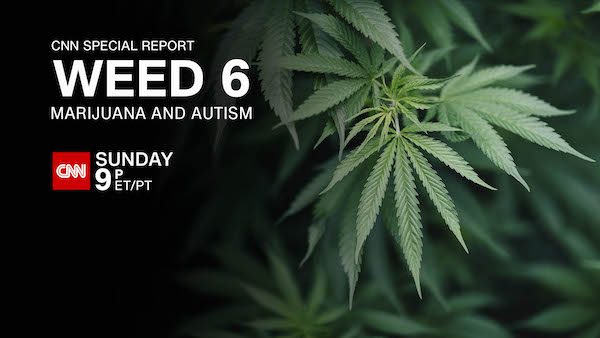 The 6th Installment in the Award-winning Series by Dr. Sanjay Gupta will Air on Sunday, December 19th at 8pm ET/PT

Nearly ten years ago, CNN chief medical correspondent Dr. Sanjay Gupta set out on a journey and traveled the globe to investigate the medical benefits of medical marijuana.  WEED, the original award-winning documentary in the series that premiered in 2015, highlighted the remarkable benefits of CBD in treating seizure disorders in kids. The documentary led to dozens of state legislatures changing laws granting parents and doctors the ability to use CBD in treating children.

In WEED 6: Marijuana and Autism, which airs on Sunday, December 19th at 8 pm ET/PT, Dr. Gupta takes viewers on a similar journey. Medical marijuana is known to treat dozens of disorders. In this documentary, Gupta follows several families who have seen the miraculous benefits of the plant on their children struggling with autism.

Autism, ASD for Autism Spectrum Disorder, is by definition a wide array of behaviors. Whether mild or severe, two core symptoms are social communication challenges and restrictive or repetitive behaviors. In WEED 6: Marijuana and Autism, viewers will meet researchers, doctors, and families, some of whom are coming out publicly for the first time, and will see in real-time how life-changing the plant can be for them.

CNN Special Report WEED 6: Marijuana and Autism will stream live for cable subscribers via CNNgo (CNN.com/go and via CNNgo apps for Apple TV, Roku, Amazon Fire, Chromecast, Samsung Smart TV and Android TV) and on the CNN mobile apps for iOS and Android. The special will be available on demand beginning Sunday, December 19th via cable/satellite systems, CNNgo platforms and CNN mobile apps.