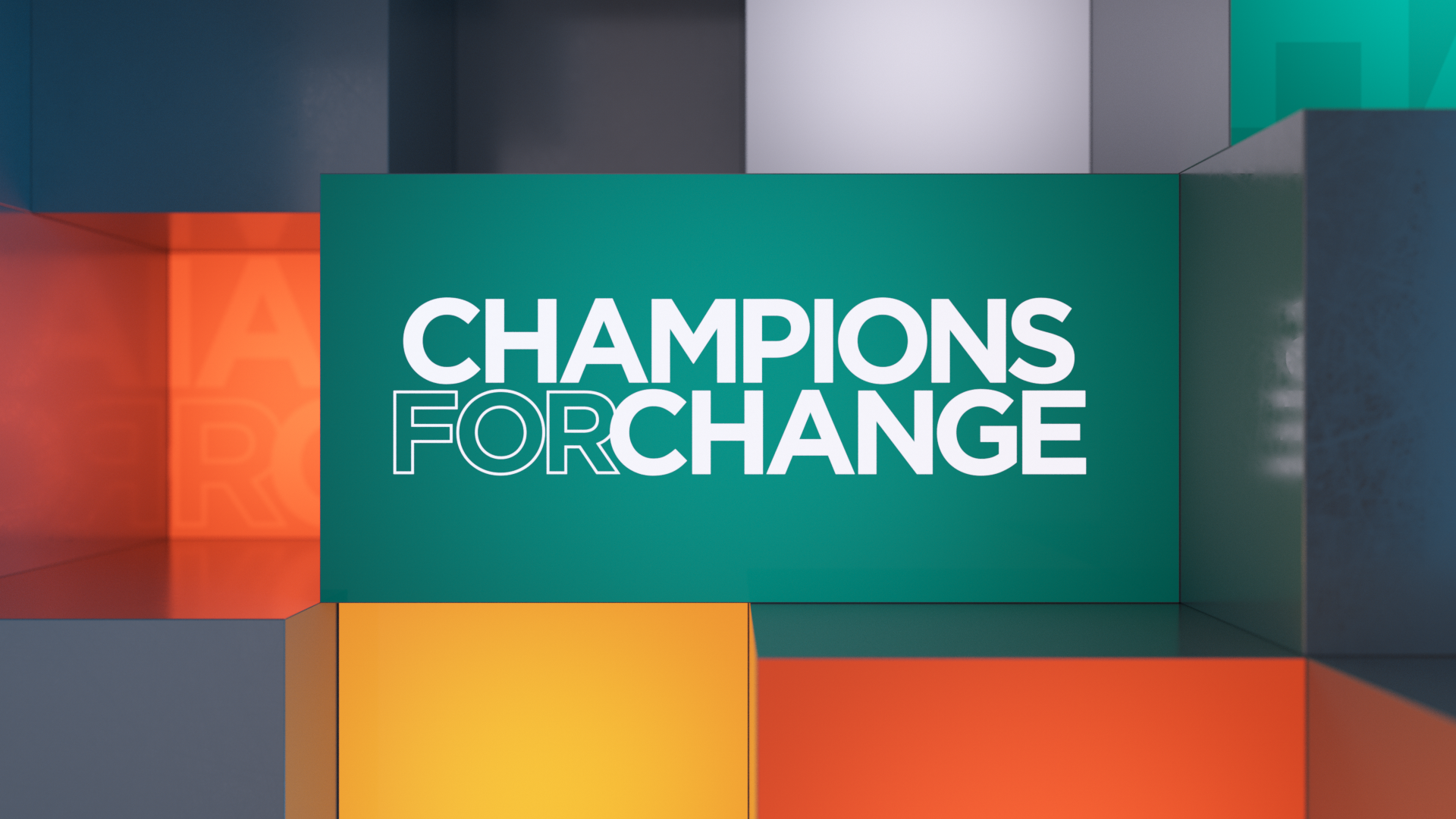 This year’s Champions for Change include:

Derek and Becky Woods are instilling a new generation of theatrical performers with deep cultural literacy and appreciation of diversity. Their Riverdale Children’s Theatre trains kids from a wide range of religions, ethnicities, and experiences to understand themselves and each other through acting, singing and stagecraft. The program has a growing list of accomplished alumni, and while participants typically pay tuition, no child gets turned away for financial reasons. CNN anchor and resident music man John Berman joins the kids to belt out some tunes and explore the magic behind the Riverdale Children’s Theater.

Shara Mondy outfits men – especially those trying to start new lives after prison – in business suits so they can confidently pursue employment, curtailing recidivism through the power of dignity. CNN’s Victor Blackwell first learned of the “Suited 4 Success” program as a young reporter working in Shara’s hometown of Jacksonville, Florida. He frequently donated his apparel to her cause and watched her become the center of an activist network providing haircuts, interview training and even table etiquette lessons to disadvantaged men starting anew.

Overfishing has become a serious problem in the world’s oceans, not only impacting the food chain but also the livelihoods of millions. The issue weighs heavily on CNN’s Kate Bolduan, an avid diver and seafood connoisseur. She meets with Jenn Dianto Kemmerly, VP of the Global Ocean Initiatives at the Monterey Bay Aquarium. Jenn and her team promote and develop sustainable fishing and aquaculture practices for fishermen, chefs, and average consumers.

CNN’s Pamela Brown introduces us to her big brother, Lincoln. What started as a small gesture providing Christmas presents to strangers in need turned into Lincoln’s heart-felt embrace of an immigrant family. Pamela shows us how her brother grew especially close to the family’s 14-year-old son and became a beloved figure to the two daughters and their single mother. In this year’s most personal “Champions for Change” story, Pamela paints an inspiring profile of a man, an immigrant family, and how one person can motivate an entire community to make an impact.

Truck driver Sharae Moore is changing the face of her industry. Her company, S.H.E. Trucking, trains and encourages women to take growing roles in long-haul trucking.

Sharae’s training program boasts a 100% success rate for women seeking commercial licenses. CNN’s Erin Burnett is passionate about women’s empowerment in business and explores S.H.E. Trucking’s most significant impact: the support network among women who are increasingly taking the wheel in a traditionally male-dominated industry.

Silvia Hernandez, a Mexican immigrant, helped found the Comal Heritage Food Incubator in Denver. The program teaches entrepreneurship and professional food techniques to immigrants so they can parlay their old-country cooking knowledge into careers in ethnic cuisine. Central to the incubator is a luncheonette where paying customers enjoy diverse dishes and students learn the business. The concept hits home for CNN’s Ana Cabrera. She grew up in Denver and is partly of Mexican descent. Ana meets up with Silvia, introduces us to some of the students and shares their recipes for success.

Sean Perry is shaking up the traditional approach to children’s mental health by making treatment available to students of all income levels at much younger ages. His nonprofit “We R H.O.P.E.” works within school systems, during school hours. CNN’s Alisyn Camerota has three teenagers of her own and a keen interest in young people’s welfare. She explores how Sean is closing the economic gap in professional mental health support while shattering the stigma of mental illness.

CNN’s Anderson Cooper introduces us to Alexander McLean, founder of Justice Defenders. The London-trained lawyer was appalled by the cumbersome, crowded and ultimately unfair justice system in Africa where many inmates, never having legal representation, languish behind bars. Justice Defenders provides extensive training for inmates and prison guards, teaching everything from basic court procedures to a full law degree-granting program. The empowered inmates then provide advice and legal services to themselves and fellow prisoners. The program has resulted in more than 4,000 convicts winning their releases from Kenyan and Ugandan prisons over the last three years. Activists all over the US are now working with Justice Defenders to set up similar programs.

Joanne Peterson knows all too well the family struggles that come with opioid addiction. She set up the “Learn to Cope” network to help other families navigate their loved ones’ dependencies and the associated traumas. Dr. Sanjay Gupta introduces us to this respected activist who set up a groundbreaking family/peer counseling program and became a prominent voice for treatment and recovery.

Kramer Wimberley/Diving With a Purpose

Kramer Wimberley is training a generation of SCUBA divers to restore ocean ecology for the future while protecting history and heritage in submerged wrecks. As a lead instructor for Diving With a Purpose, Kramer along with a team of other Black divers, mentors and encourages youth to pursue underwater archaeology and SCUBA. CNN’s Fredricka Whitfield, a 30-year SCUBA diver, joins Kramer and his team as they work beneath the waves.