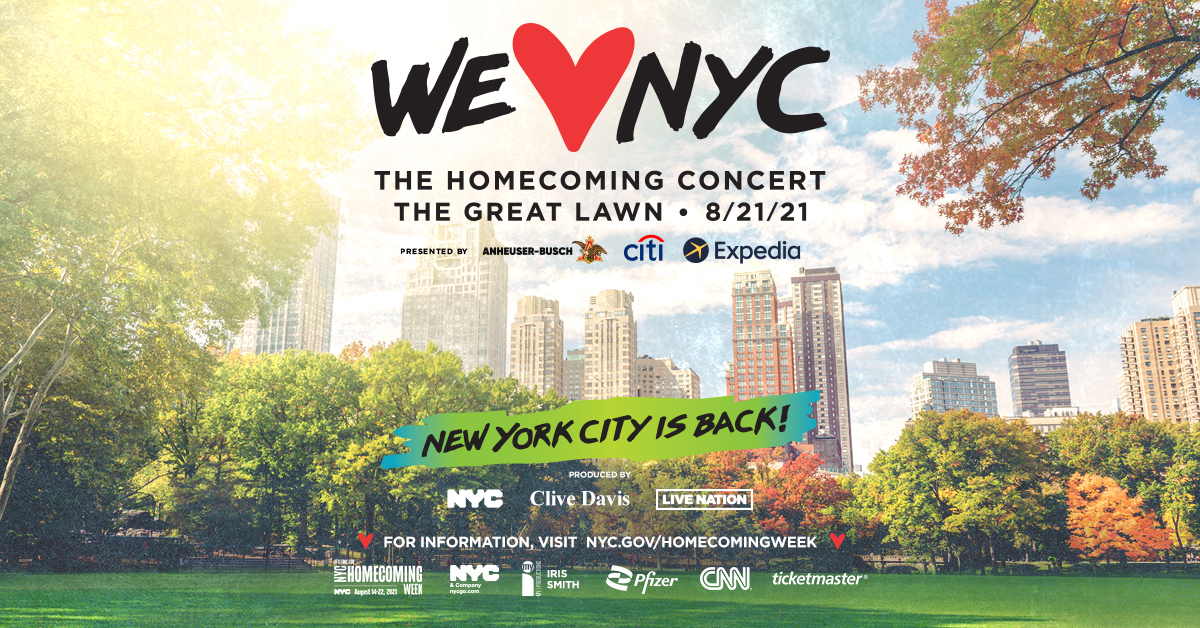 Celebrate New York City’s comeback with WE LOVE NYC: The Homecoming Concert on Saturday, August 21 at 5pm ET, airing exclusively worldwide on CNN. The historic, star-studded concert, which will take place on the Great Lawn in Central Park for a vaccinated audience, will air live worldwide on CNN, CNN International, CNN en Español, and unauthenticated on CNN.com and CNNgo.

CNN anchor Anderson Cooper will kick off coverage at 4pm ET, featuring Don Lemon and Erica Hill, Athena Jones and Chloe Melas, which will take viewers inside the once-in-a-generation concert taking place in the heart of NYC. Cooper will interview music industry legend Clive Davis, New York City Mayor Bill de Blasio, and more. The coverage will also highlight everyday New Yorkers that have been on the front lines of battling the pandemic.

To enter the concert, all attendees who are age 12 or over must present proof of COVID-19 vaccination, except for persons who are unable to get vaccinated because of a disability, who will be provided reasonable accommodation. For additional information please visit the NYC Homecoming Week FAQ.

Please note: As the exclusive broadcaster of WE LOVE NYC: The Homecoming Concert, CNN cannot provide video clips to media outlets because of music rights.

As presenting partners of WE LOVE NYC: The Homecoming Concert, Anheuser-Busch, Citi and Expedia are also sponsors of CNN’s exclusive coverage and broadcasting of this landmark event through a collaboration between CNN Worldwide Commercial and Live Nation. The brands are aligned with pre, live and post-concert coverage through billboards, bespoke advertising and co-promotion across CNN TV, digital and social platforms to reach CNN audiences across the world.

“Just as CNN is truly a global media operation, New York is one the world’s leading global cities. We are really excited about bringing the WE LOVE NYC: The Homecoming Concert to the hundreds of millions of people in over 200 countries who use CNN every day. This is an event that, wherever you are in the world, you’d love to be at and by integrating it across our numerous TV and digital products we are helping to amplify the concert globally,” said Rani Raad, President, CNN Worldwide Commercial. “Along with our three presenting partners, Anheuser-Busch, Citi and Expedia, we are immensely proud to share this occasion with audiences worldwide as we collectively look towards a brighter future.”

WE LOVE NYC: The Homecoming Concert will air live on CNN, CNN International, and CNN en Español on Saturday, August 21 at 5pm ET, with pre-show coverage beginning at 4pm ET. It will stream live, without requiring a cable log-in, on CNN.com’s homepage and across mobile devices via CNN’s apps for iOS and Android. It can also be viewed on CNNgo (at CNN.com/go on your desktop, smartphone, and iPad, and via CNNgo apps for Apple TV, Amazon Fire, Android TV, Chromecast and Roku). The special will also be available on demand to subscribers via cable/satellite systems, CNNgo platforms and CNN mobile apps.