CNN’S Newest Original Series History of the Sitcom and Jerusalem: City of Faith and Fury Rank #1 in Cable News

CNN once again surpassed MSNBC in all dayparts this month, including Total Day, M-Su prime time, dayside and on weekends in the key demographic adults 25-54 according to Nielsen data. The network also ranked #1 in cable news in weekend prime time in the demo 25-54.  Year-to-date, CNN is the top-rated cable news network – outperforming MSNBC and FNC — in Total Day among 25-54 and is a top 10 cable network in total viewers across every daypart this month. CNN’s newest Original Series History of the Sitcom and Jerusalem: City of Faith and Fury ranked #1 in cable news in July across all demos.  CNN continues to have the youngest audience in cable news in Total Day and prime time and reaches the largest cumulative TV audience among both total viewers and 25-54 2021-to-date.  CNN’s digital platforms are also having record numbers, making CNN the most watched and most used news and information brand in the world.

(Of note:  All CNN, FNC and MSNBC dayparts and programs are registering double-digits declines compared to July last year.  As a news organization, CNN was up the most throughout last year’s busy news cycle and had heightened viewership during the coronavirus pandemic outbreak in 2020.) 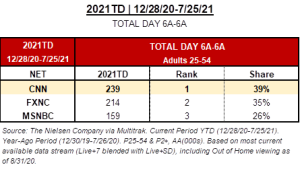 On Saturdays from 4-5pm and on Sundays at 4pm and from 7pm-1am, CNN was #1 in cable news – outperforming MSNBC and FNC.  CNN also ranked  #1 during weekend prime time in the key demo adults 25-54.

New Day Weekend with Christi Paul and Boris Sanchez surpassed MSNBC in cable news in either total viewers and/or the key demo adults 25-54 in its time period on Saturdays and Sundays.  Smerconish topped MSNBC on Saturday mornings at 9am in the key demo 25-54 (101k vs. 79k).  CNN Newsroom weekend anchors Jim Acosta, Pamela Brown and Fredricka Whitfield ranked either #1 or #2, outperforming MSNBC in each hour on Saturdays/Sundays in total viewers and 25-54.

On Sunday mornings, all CNN programs outperformed MSNBC this month.  Inside Politics with Abby Phillip (8am) topped MSNBC in the demo (95k vs. 48k).  State of the Union with Jake Tapper/Dana Bash (9am, noon) and Reliable Sources with Brian Stelter (11am) ranked #2 in cable news, topping MSNBC in both total viewers and the 25-54 demo. Fareed Zakaria GPS (10am) surpassed MSNBC in total viewers and the demo and at 1pm in the demo 25-54 (98k vs. 86k)

All the cable news networks were down vs. last July due to the heightened news cycle of the coronavirus pandemic and subsequent shutdown across the country last year.