CNN Beats MSNBC in Total Day, Prime Time, Dayside and Weekends Among Adults 25-54 in May

CNN beat MSNBC in all dayparts in May including Total Day, prime time, dayside and on weekends in the coveted sales demographic adults 25-54 according to Nielsen data. Despite a news cycle that has cooled down significantly from a year ago, CNN had its third best May prime time delivery in 13 years (since 2008) in total viewers (just behind 2020 and 2017). CNN is #1 in All of Cable (not just news) since the New Year among 25-54 and is a top 10 cable network in total viewers across dayparts this month.  CNN continues to have the youngest audience in cable news in Total Day and prime time and reached the largest cumulative TV audience among both total viewers and adults 25-54 in May.  CNN’s digital platforms are also having record numbers, making CNN the most watched and most used news and information brand in the world.

(Of note:  All CNN, FNC and MSNBC dayparts and programs are registering double-digits declines compared to May last year.  As a news organization, CNN was up the most throughout last year’s busy news cycle and had heightened viewership during the coronavirus pandemic outbreak in 2020.)

On Saturday and Sundays, CNN’s new programs CNN Newsroom with Jim Acosta(3p-6p/4p-6p) and CNN Newsroom with Pamela Brown (6p-9p) both rank #1 in the demo 25-54, FNC was second and MSNBC was third. Both Acosta and Brown ranked #2 among total viewers, ahead of MSNBC by double digits in their respective time periods.

New Day Weekend with Christi Paul and Boris Sanchez surpassed MSNBC in cable news in both the key demo adults 25-54 and total viewers in its time period on Saturdays and Sundays.  Smerconish topped MSNBC on Saturday mornings at 9am in the key demo 25-54 (131k vs. 84k) and total viewers (739k vs. 733k).  CNN Newsroom with Fredricka Whitfield also ranked #2 in cable news among adults 25-54 during its respective time periods on Saturdays and #2 in Sundays in the demo/total viewers.

On Sunday mornings, all CNN programs easily outperformed MSNBC in May.  Inside Politics with Abby Phillip (8am) topped MSNBC in the demo (105k vs. 56k).  State of the Union with Jake Tapper/Dana Bash (9am, noon), Fareed Zakaria GPS (10am, 1pm) and Reliable Sources with Brian Stelter (11am) all ranked #2 in cable news, topping MSNBC in both total viewers and the 25-54 demo. 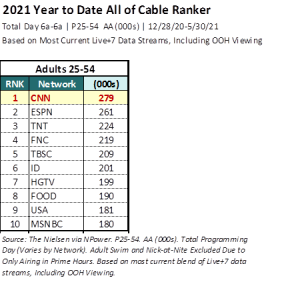 CNN Digital viewing added a 2% lift (or monthly 11k) to CNN’s P2+ 615k total day TV audience for a total of 626 thousand across platforms in May.