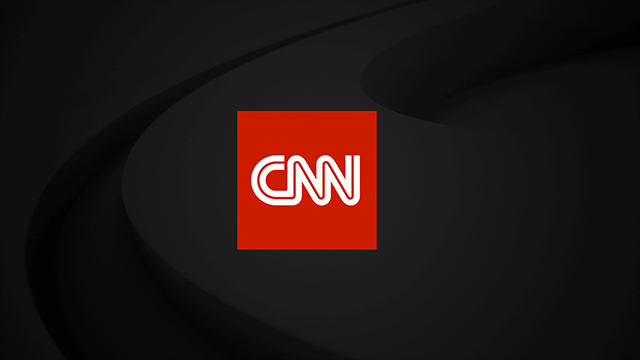 The Lead with Jake Tapper, The Situation Room with Wolf Blitzer and Erin Burnett Outfront are #1 in Cable News

Year-to-Date CNN is Up, While Fox is Still Down

With the Nielsen month ending on Sunday (4/25), CNN ranked #1 in all of cable (not just news) during Dayside in the key demo adults 25-54 in April.  The network also surpassed MSNBC in Total Day, throughout key program hours, weekends and on Sunday mornings among adults 25-54 this month.  While all the cable news networks are down vs. a year ago due to increased viewership during the coronavirus pandemic outbreak last April, CNN still had its third highest April ratings among total viewers since 1995 (behind 2020 and 2003). And Year-to-Date, CNN is up across the board, while Fox is down. CNN continues to have the youngest audience in cable news in Total Day and prime time and reached the largest cumulative TV audience among both total viewers and adults 25-54 this month.  CNN’s digital platforms are also having record numbers, making CNN the most watched and most used news and information brand in the world. 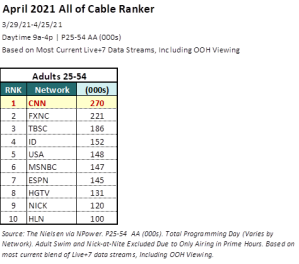 New Day Weekend with Christi Paul and Victor Blackwell easily surpassed MSNBC to rank #2 in cable news in the key demo adults 25-54 on Saturday from 7-9am and on Sunday from 6-8am (The program became New Day Weekend with Christi Paul and Boris Sanchez on April 11th.)  CNN Newsroom with Fredricka Whitfield ranked either #1 or #2 in cable news in total viewers and/or adults 25-54 during its respective time periods on Saturdays and Sundays.

On Sunday mornings, all CNN programs easily outperformed MSNBC in April.  Inside Politics with Abby Phillip (8am) topped MSNBC in the demo (118k vs. 69k).  State of the Union with Jake Tapper/Dana Bash (9am), Fareed Zakaria GPS (10am) and Reliable Sources with Brian Stelter (11am) all ranked #2 in cable news in their respective time periods, topping MSNBC in both total viewers and among the 25-54 demo.  SOTU with Jake Tapper/Dana Bash at noon was #1 in cable news in the demo with 161k, Fox followed with 151k and MSNBC lagged with 86k, the program also surpassed MSNBC in total viewers (875k vs. 657k).  Fareed Zakaria GPS at 1pm also ranked #1 in the demo and #2 in total viewers.

Of note:  All CNN, MSNBC and Fox dayparts and programs are down vs. last year due to increased viewership during the coronavirus pandemic a year ago, April 2020.

Since the beginning of 2021, CNN is up across all days parts vs last year, while Fox is the only cable news network to decline by double digits compared to a year ago:

2021-to-date CNN reaches more people in the US than any other cable news brand across TV and digital among total viewers, adults 25-54 and adults 18-34.

Note that Comscore Xmedia data is delivered on a delayed schedule and therefore the above reflects Jan-Feb 2021.