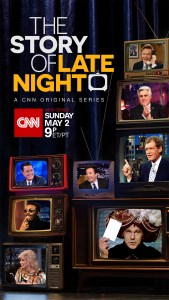 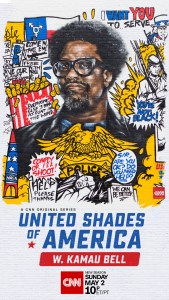 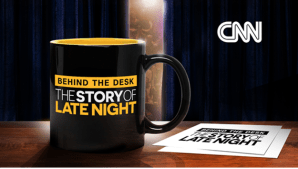 Behind The Desk: The Story of Late Night Trailer: LISTEN HERE

NEW YORK— APRIL 1, 2021 It’s a big CNN Original Series premiere night on Sunday, May 2 with the launch of the latest CNN Original Series, The Story of Late Night at 9pm ET/PT and the return of the Emmy Award-winning United Shades of America with W. Kamau Bell at 10pm ET/PT.

The Story of Late Night is a six-part docuseries, produced by Cream Productions, that will take viewers on a journey through late-night television’s most memorable moments. Spanning a more than 60-year history of engaging with, adapting to and influencing our rapidly changing society, late-night television has grown into a thriving entertainment phenomenon and vitally important cultural institution.

The series will regularly air on Sunday nights at 9pm ET/PT, with an extended series finale examining the present day, diverse generation of hosts reimagining political comedy for the Trump era only to confront the format’s greatest challenge yet: COVID-19.

CNN Audio is also launching a companion podcast for The Story of Late Night, offering listeners an original audio experience that goes even deeper into the world of late-night television with more immersive, audio-first interviews from series guests. Hosted by CNN contributor and former New York Times media reporter Bill Carter, the Behind the Desk: Story of Late Night podcast will explore late-night television from its inception to present day, and look ahead toward the genre’s increasingly digital and more diverse future. The podcast, produced by CNN Audio and Cream Productions, will release its first two episodes on Thursday, April 22 on all podcast platforms, with subsequent episodes released every Thursday.

“I’ve covered late-night TV for a long time, long enough to know it’s filled with fascinating personalities, big moments, big laughs, all kinds of conflicts, characters, craziness and compelling stories,” said Bill Carter, author of New York Times Best Seller ‘The Late Shift’. “In our docuseries and our accompanying podcast, we’re going to take a deep dive into all of that–and have a lot of fun doing it.”

Executive producers for The Story of Late Night are David Brady, Kate Harrison Karman, John Ealer, and Bill Carter for Cream Productions and Amy Entelis and Lizzie Fox for CNN Original Series. The Behind the Desk: Story of Late Night podcast is executive produced by Megan Marcus for CNN Audio, along with Bill Carter, Johnny Kalangis, David Brady and Kate Harrison Karman for Cream Productions.

United Shades of America with W. Kamau Bell, produced by Zero Point Zero Production, is a seven-part docuseries that follows socio-political comedian W. Kamau Bell as he explores communities across the country to understand the issues that impact them. His unique ability to approach each topic with empathy and humor gives voice to those whose perspectives are too often left out of the conversation.

Season 6 of United Shades of America is a season like none before it. As much of the country was shutdown, Bell and his team traveled the nation, masked up and socially distant, to produce and film this season entirely during the Covid-19 pandemic. The risks and challenges for Bell and his team were unprecedented, but Bell and ZPZ stayed committed to this unique opportunity to have meaningful conversations with people across the country about the issues that continue to impact our lives during these previously unimaginable times.

“I don’t know if anyone, who wasn’t there, will ever understand what it was like to be traveling all around The United States, during the height of the COVID-19 pandemic,” said Bell. “It was scary. Way scarier than talking to the KKK. And being out there in America also revealed some of this country’s biggest and longest standing problems. And the fact is that no matter what each episode was about, everything that America went through in the past year made it into the show. From the coronavirus, to #BlackLivesMatter, to the fall of Trump, to the January 6th insurrection, to the very question at the bottom of all this – Is this country even worth fighting for? It’s all in the show.”

“And honestly, most seasons my goal for the show is an Emmy. But this season, my goal was much different: to not get COVID-19. I’m happy to say… Mission accomplished!”

In the extended season six premiere, “Policing the Police” Bell examines the history and current state of policing in America through the eyes of activists, organizers, politicians, victims and police themselves in his hometown of Oakland, California and the Bay Area.  In subsequent episodes, he’ll explore protests in Portland; the wealth gap; Afrofuturism; the shifting ethnic makeup of the US; the military in America; and violence against the Transgender community in Texas.

The first five seasons of United Shades are currently available to watch on HBOMax.

The Story of Late Night and United Shades of America will stream live for subscribers the day of their premieres via CNNgo (at CNN.com/go and via CNNgo apps for Apple TV, Roku, Amazon Fire, Samsung Smart TV and Android TV) and on the CNN mobile apps for iOS and Android. Ahead of the broadcast premiere, starting on Friday, April 23 the ‘Eyes on the Throne’ episode of The Story of Late Night will be available on demand to subscribers via cable/satellite systems, CNNgo platforms and CNN mobile apps. Episodes of both series will be available the day after their broadcast premiere on demand via cable/satellite systems, CNNgo and CNN mobile apps.

About CNN Audio
CNN Audio is the exclusive producer of audio content and podcasts for CNN Worldwide, creating listening experiences that are relevant, informative, and highly engaging for audiences to dig deeper in topical news and original enterprise storytelling. Find all CNN Audio content at www.cnn.com/audio.