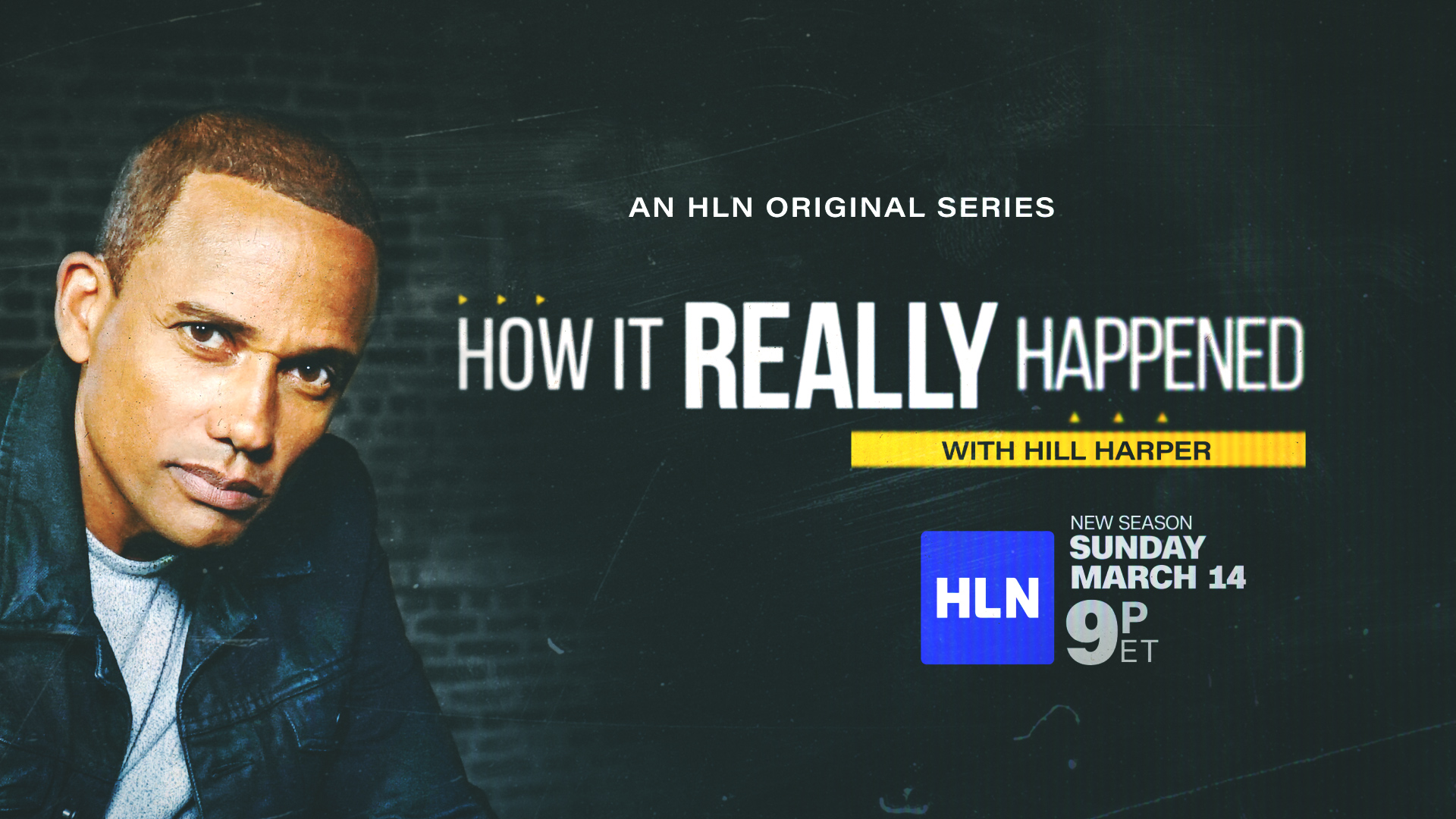 March 1, 2021 – Following its highest rated season to date, HLN’s longest running Original Series How It Really Happened with Hill Harper begins its sixth season with a comprehensive look at the disturbing case of missing mom Susan Powell, on Sunday, March 14 at 9pm-11pm ET/PT.

The popular crime and investigation series delves deeply into some of the most notorious mysteries, trials, and celebrity tragedies of our time, with enlightening interviews and access to the vast CNN news library.

Nancy Duffy is executive producer of the HLN Original Series How It Really Happened.

How It Really Happened will stream live for subscribers via CNNgo (at CNN.com/go and via CNNgo apps for Apple TV, Roku, Amazon Fire, Samsung Smart TV and Android TV) and on the CNN mobile apps for iOS and Android. Additionally, all series episodes will be available on demand after their broadcast premiere via cable/satellite systems and CNNGo platforms.

Following are airdates and episode descriptions for season six:

Hour 1 – Susan Powell, a 28-year-old mother of two, goes missing in December of 2009. Her husband Josh claims to have taken their two young sons winter camping in the Utah desert and says he returned the next day to find her gone. Questioned by detectives, he doesn’t behave like a concerned husband and his version of events doesn’t match his son’s. The mystery about where Susan’s is deepens as more details about her marriage to Josh and their life behind closed doors emerge. Susan’s family and friends do everything they can to find her while Josh insists that she ran out on him and their two little boys. The search for Susan Powell plays out on a national stage with everyone wondering: did she run off? Was she taken? Is Susan Powell dead or alive?

Hour 2 – Authorities search for missing mother of two, Susan Powell, in every nook and cranny of the desert in Western Utah while her friends and family wait for a break in the case. Her husband Josh is named a person of interest as suspicion about his involvement in her disappearance grows. He and his father wage a counter-attack and a war between Susan and Josh’s families erupts in the glare of the public spotlight. Shocking revelations about Josh and his family come to light…evidence of violence, obsession and sexual perversion. The family drama leads up to a shocking and unimaginable conclusion.

Hour 1 – Two dangerous killers break out of one of New York State’s toughest prisons. Convicted murderers Richard Matt and David Sweat cut through steel walls, crawl through steampipes, and snake their way through a maze of tunnels on their way to freedom. When authorities discover the details of their elaborate escape – there are more questions than answers. Who are these men?  How did they mastermind their plan? And can they capture them before they kill again?

Hour 2 – The manhunt for escaped prisoners – Richard Matt and David Sweat was growing, expanding from the Northeast United States to Canada and Mexico.  Thousands of leads were being followed, but weeks into the search, there was still no sign of the missing men. Where are they? How much help did they have? And – would they ever be captured?

Hour 1- Bernie Madoff was a legend on Wall Street. He helped create Nasdaq, served as its chairman, and operated a highly successful brokerage firm. But at the same time, Bernie Madoff was also running a secret hedge fund, a fund known only by word of mouth. As news spread about Madoff’s steady returns, some of the wealthiest people were begging Bernie Madoff to invest their money. Billions of dollars were pouring in from around the world.  But in 2008, when the financial crisis hit and Madoff’s investors began demanding their money back, Madoff knew he wouldn’t have enough to pay them. He finally confessed to his sons that he had been living a lie—that his investment business was nothing more than a multi-billion-dollar fraud—the largest Ponzi scheme ever.

Hour 2 –The news of Bernie Madoff’s arrest sent shockwaves around the world.  His staggering crime affected thousands of victims, including charities, universities, celebrities and even Madoff’s own family and friends.  How did he do it? Why did he do it? Did he have any help? Investigators were about to unravel a scheme that went back decades and involved several loyal employees.

Glenn Frey was a multi-talented musician and along with Don Henley co-founded the legendary band, the Eagles. During the 1970’s the Eagles released a series of hit songs… from Peaceful Easy Feeling, to Already Gone, to the classic hit Hotel California. Glenn Frey played piano, guitar, sang and wrote songs that stood the test of time. On stage fans always saw a fun-loving Glenn Frey but behind the scenes he had been dealing with a number of health issues. And ultimately when he died in 2016 his fans were shocked because he was still playing the music they loved.

Sunday, April 11 “The Dartmouth Murders: Evil in a Small Town” (one hour)

They were well-known and well-liked Dartmouth College professors. But on January 27th 2001, Half and Suzanne Zantop’s incredible lives came to a shocking and unforeseeable end: found brutally murdered in their remote Hanover, New Hampshire home. The double killing quickly became national news. Who would commit such a heinous act, and more importantly, why?  With few leads and few clues at the get-go, investigators were stumped.  But some good old fashioned police work would lead detectives to a small town just across the border in Vermont… where they found an incredibly unexpected twist to this ‘whodunit’ mystery.

In the early 1990’s daytime talk television was on the rise.  In an effort to capture high ratings shows began to push the envelope with outrageous stunts and controversial guests. Viewers liked watching the dramatic scenes play out, but critics called it trash TV. Then in March of 1995, after three friends went on The Jenny Jones Show to reveal a secret crush, one of them ended up dead and another was charged with murder. What lead to the killing and why did one of the friends feel the spotlight was too hot?