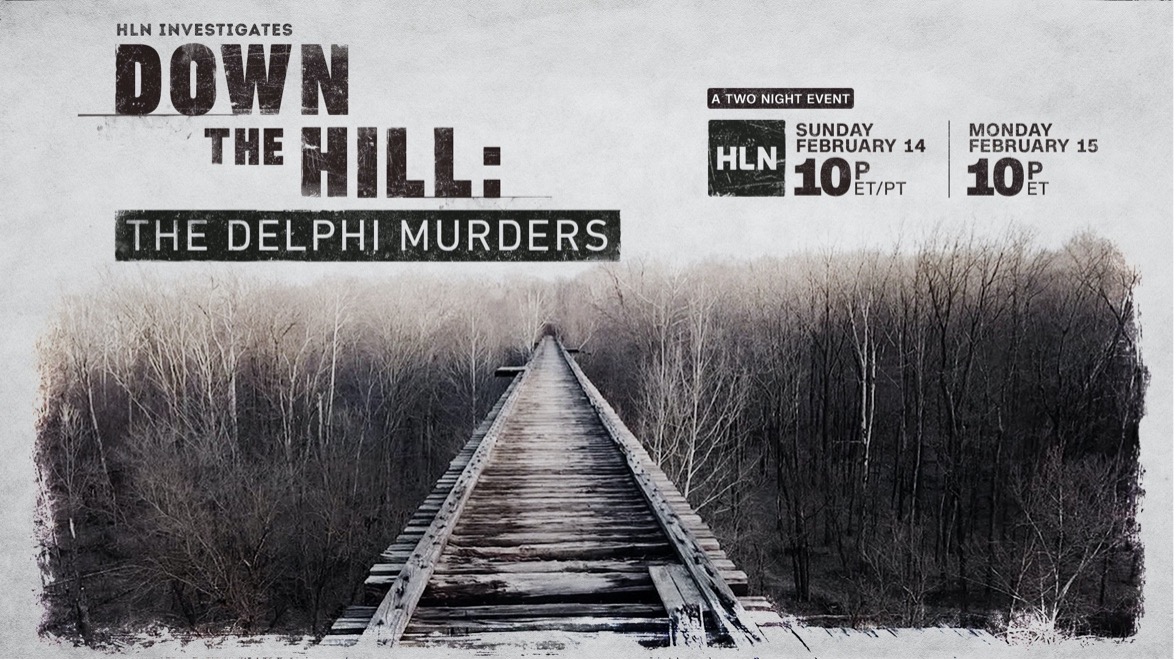 February 3, 2021 – On the heels of the chart-topping HLN podcast “Down the Hill” (10 million + downloads) and marking the fourth anniversary of the brutal murders of teenage girls Abby Williams and Libby German in a rural Indiana town, HLN presents the two-night TV event Down The Hill: The Delphi Murders beginning February 14 at 10 pm ET/PT, preceded by a new chapter of the podcast available on February 8.

The two-night event airing Sunday, February 14 at 10 pm-11pm ET/PT (part one) and on Monday, February 15 at 9-11pm ET (re-air of part one/premiere of part two) on HLN, features on-site, in-depth investigative reporting into the 2017 crime that captivated the nation.

As media outlets across the globe re-played an ominous, grainy, two-second video that was captured on one of the victim’s phones of the alleged perpetrator saying, “down the hill,” theories and speculation ran rampant. Four years later, despite audio and video of the alleged killer, the case remains open, and the killer is – police believe – still living and working among the residents of Delphi, Indiana.

The two, one-hour episodes will highlight several new developments in the case including a revealing one-on-one interview with the man leading the investigation, Sheriff Tobe Leazenby. The Sheriff goes further into his description of the evidence on Libby’s phone than ever before, talking specifically about what is and what is not on the phone. Leazenby also reveals new, detailed insight into the 2-day search for the girls and discloses the one thing he wishes he did differently.

Viewers will also see a new national exclusive interview with the lead prosecutor, Nick McLeland, who remains steadfast and refuses to call this a cold case. McLeland, in the rare interview, further describes the current leads the team is working on and what he’s doing, day by day, to get the case solved and into the courtroom.

Down The Hill: The Delphi Murders is hosted by HLN investigative producers Barbara MacDonald, Andrew Iden, with additional reporting by HLN anchor Susan Hendricks. The televised project is Executive Produced by Michael Kane and Bryan Bell. The Vice President of HLN Programming is Stephanie Todd. The television documentary is just the latest content released by the network to maintain visibility on the case and generate more tips or information that will ultimately lead to an arrest.

Prior to the documentary, the network launched a highly-popular podcast of the same name. Premiering on Feb. 5, 2020, the podcast was released in conjunction with the third anniversary of the murders and was named one of Apple Podcasts’ “Best New Shows of 2020.” In each chapter, a call to action is included with a tip line for anyone with information to phone in their tip. During the podcast series run, the case tip line calls increased exponentially, and to date, the series has been downloaded more than 10 million times.

The podcast can be downloaded at Apple Podcasts, Spotify, TuneIn, iHeart Radio, and Stitcher.

About HLN
HLN (www.CNN.com/HLN) features live coverage of national, regional, lifestyle, and entertainment stories in a fast-paced approachable tone with expert-led hosts. The network also presents original and acquired series focusing on true crime, mysteries and investigations. HLN is a CNN Worldwide network reaching more than 90 million households in the U.S. CNN is a division of WarnerMedia.