CNN RANKS #1 IN CABLE NEWS IN JANUARY ACROSS THE BOARD;

ALSO #1 IN ALL OF CABLE IN TOTAL DAY, M-SU PRIME TIME & DAYSIDE IN TOTAL VIEWERS

Since the presidential election and continuing through the new year, there has been an indisputable realignment in the cable news ratings landscape.

In January, CNN was the #1 cable news network in Total Day, M-Su Prime Time and Dayside in total viewers and adults 25-54.

In ALL of cable, CNN was #1 in Total Day and daytime in total viewers and the demo 25-54, and in #1 in M-Su prime among total viewers. January was CNN’s-most watched month on record across Total Day and dayside. This month, CNN’s audience grew triple digits, while Fox was down double digits vs. a year ago. And to underscore the sea change that has occurred in cable news ratings, CNN now has the largest share of the cable news audience, with Fox’s share declining dramatically.

For the month of January, MSNBC ranked #2 in Total Day, M-Su prime time and dayside in total viewers and adults 25-54.  Fox, the once long-time ratings leader, fell to third across all the dayparts in both total viewers and demos.  In fact, Fox’s rankings dropped to the network’s lowest in 20 years: 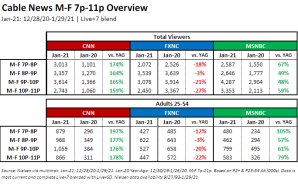 The Lead with Jake Tapper (4pm)  ranked #1 in cable news, beating MSNBC’s Deadline: The White House with Nicolle Wallace and FNC’s Your World with Neil Cavuto in the key demo 25-54 by wide margins (701k vs. 499k vs. 237k) for the third straight month.  The Tapper-led program also easily outperformed Fox once again in total viewers (2.789 million vs. 1.425 million) in January, also for the 3rd straight month.

During the weekend daypart (S/S) in both total day and primetime, CNN was #1 in total viewers and adults 25-54.  CNN’s weekend programs are hitting ratings highs and growing by triple digits compared to a year ago.

CNN’s Sunday morning programs are all having their highest ratings ever, growing by double digits vs. last year.

Out of Home Lift: