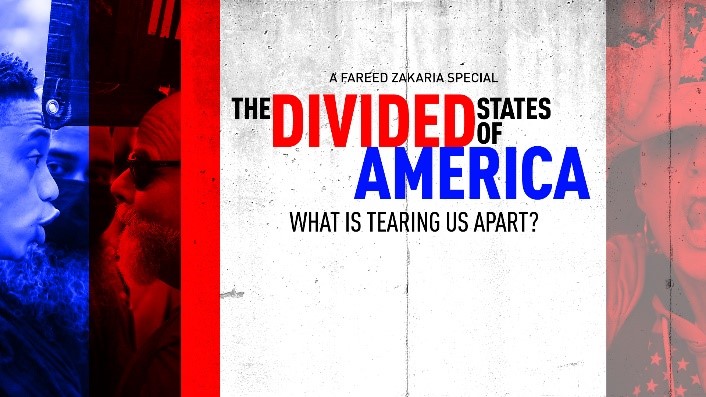 In the wake of the violent attack upon the U.S. Capitol during the Congressional certification of the 2020 national election, CNN’s Fareed Zakaria hosts a CNN Special Report: The Divided States of America – What Is Tearing Us Apart? for Sunday, Jan. 31 at 9pm on CNN and CNN International.  Three-time Pulitzer prize-winning writer and author Thomas Friedman (The New York Times; Thank You for Being Late: An Optimist’s Guide to Thriving in the Age of Accelerations, 2017); CNN commentator and former Obama Administration official, Van Jones; author and columnist Ezra Klein (The New York Times; Why We’re Polarized, 2020); author Jane Mayer (Dark Money: The Hidden History of the Billionaires Behind the Rise of the Radical Right, 2017); historian Jon Meacham (The Soul of America: The Battle for Our Better Angels, 2019); writer and author, George Packer (The Atlantic; The Unwinding: An Inner History of the New America, 2014);  law professor and author, Joan Williams (University of California, Hastings College of the Law; White Working Class, 2019); and CNN political analyst, professor, and author, Julian Zelizer (professor, Princeton University; Burning Down the House: Newt Gingrich, the Fall of a Speaker and the Rise of the New Republican Party, 2020); offer analysis and historical context.

In addition to the debut on CNN during the Jan. 31 broadcast, The Divided States of America – What Is Tearing Us Apart? will also stream live for subscribers via CNNgo (CNN.com/go and via CNNgo apps for Apple TV, Roku, Amazon Fire, Chromecast, Samsung Smart TV, and Android TV) and on the CNN mobile apps for iOS and Android.  The film will be accessible via CNN on demand via cable and satellite systems, CNNgo platforms, and CNN mobile apps, beginning Monday, Feb. 1.

The special will encore Saturday, Feb. 6 at 9:00pm Eastern.