CNN was #1 in all of television during yesterday’s Inauguration of Joe Biden, outperforming the broadcast networks and cable news (Fox and MSNBC) in both total viewers and the demo adults 25-54.  This was CNN’s most-watched inauguration in the network’s 40-year history, growing triple digits from four years ago (2017) and up from 2009. CNN was also #1 during the prime time Inaugural Celebration.  CNN has been #1 in all of cable in since the election. 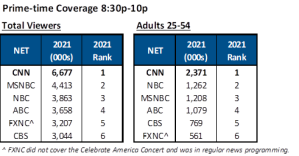 CNN Digital also saw 15.4 million video viewers via CNN.com, apps and connected devices on Wednesday, ranking in the top 10 days of all time and surpassing the 2017 Inauguration by nearly 5 million. The live stream audience peaked at 2.2 million viewers at 12:00pm during President Biden’s Inaugural address – nearly tying the 2017 Inauguration peak concurrent streams (2.29 million at 12:15pm) and surpassing all 2020 events. The live stream viewing audience ranked in the top 10 days of all time as well.