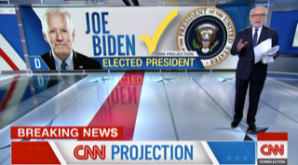 On the final Election Day (Day 5, Saturday, November 7th), CNN trounced the competition in Total Day (3am-3am) as well as during Vice President-Elect Harris’s and President-Elect Biden’s prime time speeches (8:30-9:00pm) in both total viewers, adults 25-54 and younger viewers (18-34).  CNN was first to project the race on Saturday morning at 11:24:20 am.  Data is below:

Election Week 2020 was CNN Digital’s best series of days in history, far outpacing anything on record with five of the six all-time best days ever in unique visitors and the top three days on record for live video viewers. The past week has also seen record-breaking unique visitors to CNN’s live story and CNN’s Election Center. The past five days have been the biggest days of all time for CNN’s live story while CNN’s Election Center has had 7 out of 10 biggest days of all-time – far outpacing 2016 audience levels.

The live stream of Friday and Saturday’s unauthenticated airing of CNN’s 2020 election coverage saw a peak of 1.15 million concurrent streams at 8:43 pm Saturday, during President-Elect Joe Biden’s address to the nation. Earlier in the day, concurrent streams reached 1.18 million at 11:47 a.m. following breaking news of President-Elect Biden’s victory, making it the biggest day of this cycle for concurrent live streams, and topping off a historical week for live video viewers (An unauthenticated live stream of CNN TV’s programming ran all day on Friday 11/6 and Saturday 11/7 on CNN.com, Edition.CNN.com, CNNgo on OTT apps & CNN mobile apps for iOS and Android and was not on auto-play).