CNN #1 In Prime Time and Total Day Across the Board 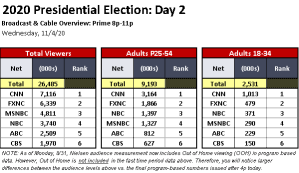 CNN Digital broke all records on Wednesday, Nov. 4th with 116 million global unique users, making it the biggest day in history for CNN. Historically, the world turns to CNN Digital in massive numbers the day after an Election Day, with users seeking to understand and engage with the results. Wednesday was up 51% over the day after Election Day 2016.

The day after Election Day 2020 was also the biggest day ever for CNN’s live story, reaching 49 million unique visitors – up over 300% from Election Day and Day After 2016.