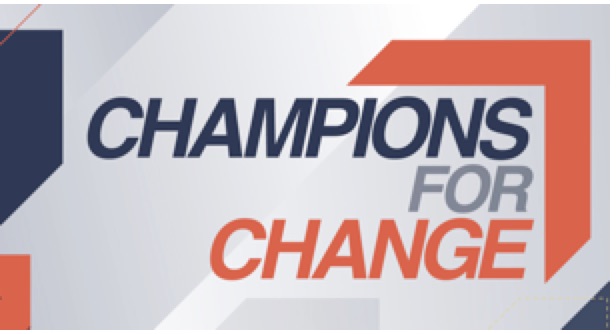 The special week-long event  launches Sunday, September 13th  across CNN,  and culminates in a one-hour special hosted by John Berman and Alisyn Camerota on Saturday, September 19th at 10 pm ET/PT.

NEW YORK – Sept. 9, 2020 – Beginning on Sunday, September 13th, CNN will air Champions for Change, a week-long special event spotlighting pioneers challenging the status quo. The special will feature ten transformative individuals — each with their own causes, obstacles and triumphs– who share their first-person narratives.

Below is the list of the incredible individuals who are this year’s Champions for Change:

Dr. Demetrio Aguila and the M25 Program at Healing Hands of Nebraska

Nebraska surgeon Demetrio Aguila was stunned to learn that many of his operations led to financial ruin for his patients, even some with insurance. So he came up with a community-wide initiative that lets patients pay for their surgeries with volunteer hours instead of money. It’s called the M25 program, a cooperative effort between Dr. Aguila’s practice and nearby non-profit organizations. The arrangement is a bold response to the often ruinous personal health expenses so many patients face.

Kevin Barber and Wheels of Change

Kevin Barber is just 19 years old. But the college sophomore has been changing lives for years. Through his “Wheels of Change” program, Barber empowers homeless people to work their way into better lives by earning fair wages cleaning San Diego’s public spaces. The young activist coordinates with city officials and shelters to grow the program and adapt it to the challenges posed by the coronavirus pandemic. Along the way, San Diego’s citizens benefit with a cleaner city, polished up by homeless people who are also polishing up themselves and feeling relevant again.

Judaline Cassidy and Tools and Tiaras

Plumber Judaline Cassidy knows all about breaking through walls and changing the flow. With more than 20 years on the job, the proud tradeswoman is encouraging girls to follow in her bootsteps. Through her “Tools and Tiaras” program, Cassidy runs camps, monthly workshops and mentoring programs that introduce girls to construction trades like plumbing, carpentry and electrical. Cassidy calls her participants “princess warriors,” and her program is redefining the girls’ goals and ideas about what’s possible for their futures in the trades.

A Puerto Rican architect is looking to revolutionize housing in disaster-prone areas by building stormproof homes out of shipping containers. Carla Gautier Castro was shocked by Hurricane Maria’s total devastation in Puerto Rico three years ago. She was further surprised by the prohibitively high rebuilding costs. The third-generation architect searched for a fast way to build durable but comfortable housing. Her company, KONTi Design Build Studio came up with ways to turn steel shipping containers into quaint houses and service buildings that have proved their mettle. In the aftermath of Puerto Rico’s recent earthquakes, the non-profit Americas for Conservation and the Arts used a KONTi container house as a health command center.

Video games have long been criticized as trivial, violent wastes of time. But a refugee from South Sudan is putting an entirely different spin on the pastime. Lual Mayen founded and runs Junub Games, which is releasing the game “Salaam.” The immersive video game puts players in the refugees’ shoes and explains the plight of migrants in an experiential way. The self-taught entrepreneur and programmer plans to partner with non-profits to raise aid and awareness for refugees through game play. As CEO of Junub Games, Mayen travels the world discussing his product and speaking about the power of video games for peace.

Two Kentucky craftsmen are turning an Appalachian tradition into a successful program for recovering opioid addicts. Earl Moore and Doug Naselroad hand-make guitars, dulcimers and mandolins – the stringed instruments you hear at folk festivals. Like far too many people in the region, Moore was addicted to opioids. He credits the precision and focus demanded by his craft for pulling him out of addiction. Moore’s triumph inspired his teacher Doug to start a program that teaches addicts in rehab to focus on building stringed instruments, pottery or blacksmithing. Eight years later, the “Culture of Recovery” program boasts successful alumni who’ve come back from addiction with new passion as craftsmen and artisans.

Tony Weaver Jr. is a man of action who grew frustrated by pervasive negative media  portrayals of African Americans. He founded Weird Enough Productions to create a comic series, school programs and other platforms that combat toxic norms within popular culture. Weaver helps young people see themselves clearly and grasp their true human potential by depicting people of color in a positive light and promoting cultural literacy.

Architect Nona Yehia has developed a way to cultivate produce – and livelihoods—on a mass scale with minimal space. She built her Vertical Harvest greenhouse on a 1/10 acre infill lot. It grows an annual bounty of vegetables equivalent to 10 acres of regular farming. Vertical Harvest strives to hire employees with special needs, providing meaningful work and reaping strong returns in tangible and intangible ways.

Boyan Slat and The Ocean Cleanup

Each year tons of plastic flow from rivers into the oceans. It builds up, harming sea life and threatening global ecology. Dutch inventor Boyan Slat develops successful watercrafts that mechanically remove plastic from the world’s oceans and waterways. At age 18, he founded The Ocean Cleanup to implement his techniques. Now 26, Slat is focusing on cleaning plastics out of rivers before they make it to the ocean.

Champions for Change will stream live for subscribers the day of the premiere via CNNgo (at CNN.com/go and via CNNgo apps for Apple TV, Roku, Amazon Fire, Samsung Smart TV and Android TV) and on the CNN mobile apps for iOS and Android. Episodes of the series will be available the day after each broadcast premiere on demand via cable/satellite systems, CNNgo and CNN mobile apps.