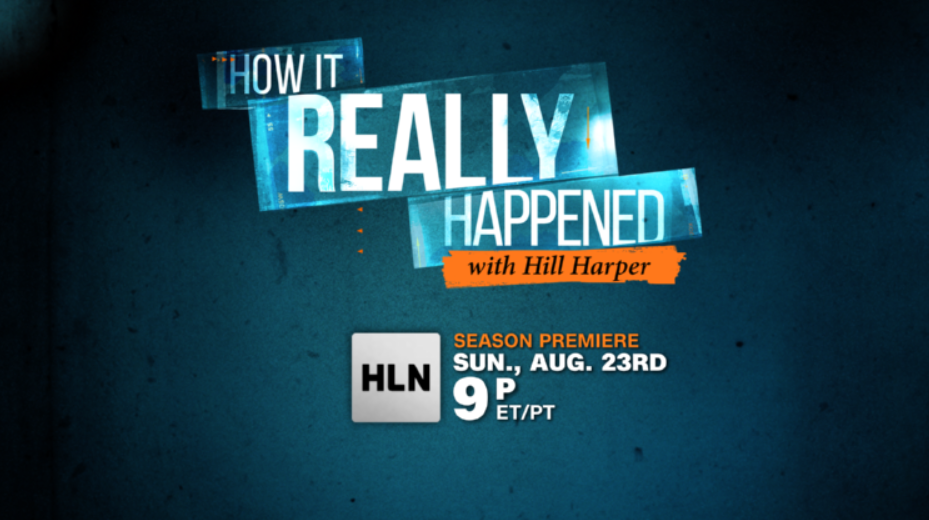 August 10, 2020 – HLN’s longest running Original Series How It Really Happened with Hill Harper begins its fifth season with a comprehensive look at the baffling case of The Atlanta Serial Killer, on Sunday, August 23 at 9pm-11pm ET/PT.

Also profiled in this six-episode season are enduring and timely stories on Siegfried & Roy, the Boston bombing, the murder of Michael Jordan’s father, the mysterious death of rock legend Tom Petty, and the bizarre case of the Yosemite Mountain Murders.

The popular series, hosted by lauded actor Hill Harper (The Good Doctor, CSI: NY), delves deeply into some of the most notorious crimes, mysteries, trials, and celebrity tragedies of our time, with enlightening interviews and access to the vast CNN news library.

Leading up to the two-hour season premiere episode, HLN will present the How It Really Happened “Every Episode Ever” marathon beginning on Thursday, August 20 from 11 am to 11pm ET and continuing on Friday, August 21 (11 am to 11pm ET), on Saturday, August 22, from 12pm ET to 11pm, and concluding on Sunday, August 23, 12 noon-9pm ET.

Nancy Duffy is executive producer of the HLN Original Series How It Really Happened with Hill Harper.

How It Really Happened with Hill Harper will stream live for subscribers via CNNgo (at CNN.com/go and via CNNgo apps for Apple TV, Roku, Amazon Fire, Samsung Smart TV and Android TV) and on the CNN mobile apps for iOS and Android. Additionally, all series episodes will be available on demand after their broadcast premiere via cable/satellite systems and CNNGo platforms.

Following are airdates and episode descriptions for season five of How It Really Happened with Hill Harper (*note special Monday, Labor Day premiere):

9-10pm, ET/PT The Atlanta Serial Killer, part 1 – Do You Know Where Your Children Are?:

LOGLINE: From 1979 to 1981, more than two dozen of Atlanta’s black children–mostly boys and young men–disappeared without a trace. Who was killing the city’s most vulnerable …and why?

SYNOPSIS It is one of the darkest chapters in Atlanta’s history.  From 1979 to 1981, more than two dozen of the city’s black children–mostly boys and young men–disappeared without a trace and were later found dead in woods, abandoned buildings, and rivers. As fear and panic engulfed the city, police were under intense pressure to find out who was killing Atlanta’s most vulnerable…and why.

When a suspect finally emerges, his case stirs controversy right from the start. He is a 23-year-old black man and part-time music producer named Wayne Williams and investigators believe he is the man responsible for the vicious slayings of more than two dozen black children and young men.  But when Williams is convicted of the murders of only two adult males, it leaves many families feeling like their children never got justice. Now, Atlanta Mayor, Keisha Lance Bottoms, has asked police to reexamine the 40-year-old evidence using modern forensics in search of any answers it might still provide.

SYNOPSIS; What is happening in Yosemite National Park? The year is 1999. A mysterious terror suddenly overruns the grandeur and serenity of Yosemite National Park. Vibrant young women are vanishing into thin air. The emergency search and rescue effort are massive, but the missing females are nowhere to be found. As the weeks and months pass the FBI investigation turns from search to recovery, and finally, to foul play. Agents discover the mountain community is a hideout for child molesters and other convicted criminal looking to take refuge. However, all the likely suspects are cleared. Then suddenly and tragically, the murdered bodies of the four missing women are discovered. But, who committed these killings?  And how did they happen? When key evidence is collected and run down, a prime suspect emerges. But as task force investigators close in on their suspect, he packs up all his belonging and slips through the net. Will the lawmen finally connect the dots and solve the notorious case of ”Malice in the Mountains?”

LOGLINE: The key suspect in the murder of young women in Yosemite National Park is caught, but it’s up to an exceptionally skilled FBI agent to dismantle his web of lies and denials to draw a confession.

SYNOPSIS: The prime suspect in the Yosemite murders vanishes just as authorities are tightening then net around him, but in a bizarre twist he is spotted in an unusual hideout that takes even veteran investigators by surprise. Authorities are quickly dispatched to the risqué and unlikely location to bring the suspect in for questioning. An expert FBI interrogator, famous among his colleagues for gently dismantling a predator’s lies and denials, and securing a full confession, arrives on the scene.

LOGLINE:  In 2003, the wildly successful careers of master illusionists Siegfried & Roy come to a shockingly abrupt end when one of the team’s prized tigers bites Roy Horn on the neck and drags him offstage.

SYNOPSIS: For decades, Siegfried and Roy dazzled millions of visitors to Las Vegas with their spectacular and unique brand of magic, co-starring with some of the world’s most dangerous wild animals. These master illusionists who could seemingly make elephants, lions and tigers disappear into thin air, were the undisputed kings of the Las Vegas Strip.  Their show brought in millions of dollars a year and the eccentric duo were beloved celebrities, show-casing the white tigers they raised from cubs and who lived on their property.  But on October 3, 2003, their wildly successful run came to an abrupt and shocking end.  In the middle of a show, one of their prized white tigers, a 380-pound male named Mantacore, bit Roy Horn in the neck and dragged him offstage in front of a horrified live audience.  The world held its breath as Roy Horn fought for his life.   He made it back from the brink of death, but the marquee show was shuttered, never to open again.  Since then, Siegfried and Roy have stuck to their version of what occurred that night, telling the world that the tiger was not attacking Roy,  rather he was trying to save his best human friend from a medical emergency by grabbing him by the neck and pulling him backstage to safety.

LOGLINE: Roy tries to recover from severe wounds inflicted by his beloved tiger Mantacore, but the team’s excuses for the animal’s behavior lose credibility upon further investigation.

SYNOPSIS: One of Siegfried and Roy’s former employees, a tiger trainer called Chris Lawrence, went public disputing their version of events on the night of October 3rd, 2003 when Mantacore, an adult white tiger, bit Roy Horn’s neck and dragged him backstage.  Investigating his claims led How it Really Happened to interview two others who had been attacked by the duo’s big cats, a former child acrobat named Sean Stanek and an employee named Charles Flannery.  These attacks received very little public attention, were the stories purposely buried?  Eye-witnesses, award-winning reporters and big cat experts also questioned whether the story about Mantacore saving Roy’s life was just another illusion presented by the magicians.  Did Roy do something out of the usual on stage that fateful night?  Was the truth covered up with the help of powerful allies?  Did the wealth and fame of Siegfried and Roy’s act allow them to present an alternative version of events?  How It Really Happened  investigates long-buried secrets and Siegfried and Roy’s limitations over the mastery of wild animals.

LOGLINE: On April 15th, 2013, two bombs explode during the iconic Boston Marathon, killing three spectators and injuring hundreds of others. In a race against time, investigators, using state of the art technology, circulate images to the public of the two suspects dubbed “black hat” and “white hat.”

SYNOPSIS: April 15th, 2013, people from all over the world gathered to watch the annual running of the iconic Boston Marathon. But at 2:49pm two pressure cookers packed with explosives went off near the finish line. With three killed, and hundreds injured- everyone wanted to know: who would do this? Was it one person? Was it a group? Was an international terrorist organization behind it? Federal and local investigators jumped into action- joining forces to try to find who was responsible.  Taking on the biggest crime scene Boston had ever seen, with the help of the public, and state of the art technology, authorities were able to identify two suspects simply known as “White Hat” and “Black Hat.” Through the voices of investigators, reporters, and survivors, this 2-hour special episode of How It Really Happened, makes use of rare footage of the events of that day to recount the horrific Boston Marathon bombings that rocked the city… and the country.

SYNOPSIS: Four days following the Boston Marathon bombings, investigators had identified two suspects from surveillance video and photos: “Black Hat” and “White Hat.” But unable to identify them- they call in the public’s help- unknowingly unleashing these terrorists who decide to go on a murderous rampage. Part two of this extraordinary, How It Really Happened, follows the incredible 48 hours during which the Marathon bombers go on a terrifying crime spree across Boston.   A police officer murdered, a civilian kidnapped, and an entire city on lockdown- all leading to an unbelievable showdown with local and federal authorities in Watertown, Massachusetts. But why and how did these brothers become killers? And could new information link one of them to a triple homicide just two years before? Tune in for this unbelievable look back at the aftermath of the Boston bombings- and a city seeking justice.

LOGLINE: News of the sudden passing of celebrated rock musician Tom Petty shocked fans worldwide, but a deeper look into the music legend’s life reveals physical and emotional afflictions that may have led to his death at age 66.

SYNOPSIS: Tom Petty was an American Music icon.  His brand of classic rock & roll with Tom Petty and the Heartbreakers spoke to millions around the world for more than four decades. Songs like “American Girl,” and “Breakdown,” are soundtracks to their lives. Tom Petty was a superstar, but he was afflicted with the very human traumas of childhood abuse, depression, divorce, and addiction. In 2017, he embarked on a 40th anniversary tour that lasted six months. One week after his triumphant final show he is found unconscious in his home. And a day later he is dead.

LOGLINE: Who would want to murder the father of beloved superstar Michael Jordan? When in 1993, James Raymond Jordan Sr. goes missing and his luxury car is found stripped and abandoned in North Carolina, clues point to a tragic crime.

SYNOPSIS: James Jordan was a hugely positive influence in Michael Jordan’s North Carolina childhood, and also, at his famous son’s side for every spectacular dunk as a seasoned pro. Michael’s loving dad was his number one fan, advisor, protector and business partner. But just when MJ soared the highest over the 1993 basketball universe, the man he called “Pops,” suddenly disappeared. James Jordan missed telephone calls, airline flights, even his 57th birthday. No one knew where he was. Then his luxury car was found stripped and abandoned. An immediate criminal investigation was launched. Who had been joyriding around North Carolina in James Jordan’s car? Who had been making those calls on his phone? Who was caught on videotape wearing Mr. Jordan’s Chicago Bulls championship jewelry? And what in the world happened to James Raymond Jordan? The manhunt is on to solve the infamous North Carolina story behind, “Killing Mr. Jordan.”