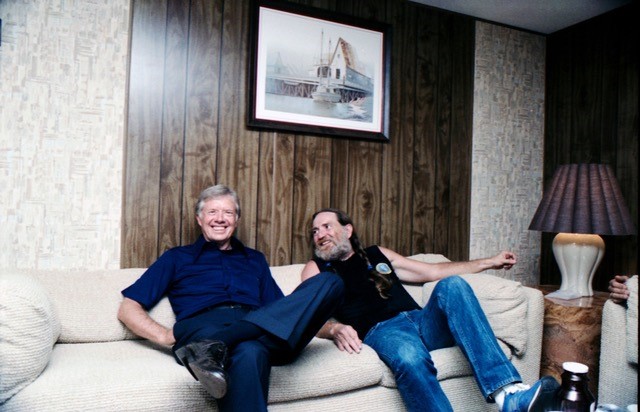 JIMMY CARTER ROCK & ROLL PRESIDENT chronicles the role of popular music in propelling a relatively unknown candidate from Georgia to the White House, and the significant role that music has played in President Carter’s life and work.  The film shows how Carter’s life-long passion for music gave him an unexpected edge as a presidential candidate, as he tapped into a force that transcended racial and generational divides, and often party lines.  Carter’s appreciation for all genres of music and friendships with the likes of Bob Dylan, Gregg Allman, Johnny Cash and June Carter Cash, and Willie Nelson, helped to define his administration.

President Jimmy Carter said, “When Chris and Mary came to Plains to show the film to me and my family, it was entertaining and emotional for all of us. The film exceeded my expectations in every way.  I’m thrilled that “Rock & Roll President” will reach a broad audience on CNN.  Despite the difficult times we are in, the film highlights my personal belief that we should remain hopeful and that music is a powerful source of hope in trying times.”

Producer Chris Farrell and Director Mary Wharton commented, “When we started this journey two-and-one-half years ago, our goal was to tell an interesting and surprising story about President Carter and his relationship with music, in the hopes that it would make people see him in a new light.  Being able to share the film with millions of Americans through this deal with CNN Films is a significant step towards achieving that goal.  The fact that we were able to screen the film for the President and receive his endorsement has been one of the most gratifying aspects of the project.  We hope that CNN viewers will come away with a new appreciation for not only his moral courage and leadership, but also the fact that he is pretty cool.”

“Mary and Chris made a sensational film that takes us on a journey into the intersection of music and politics,” said Courtney Sexton, senior vice president for CNN Films.  Sexton and Amy Entelis, executive vice president for talent and content development for CNN Worldwide, acquired the film for future broadcast presentation on CNN.  “We are thrilled to bring this important and incredibly entertaining film to our audience,” Sexton said.

The deal was negotiated by Stacey Wolf, senior vice president for business affairs for CNN Worldwide on behalf of CNN Films, and by Dan Braun and Josh Braun of Submarine on behalf of the filmmakers.  JIMMY CARTER ROCK & ROLL PRESIDENT is a Not Just Peanuts production.  It was financed by Thunder Moccasin Pictures.  Dave Kirkpatrick served as a producer.  Executive producers include Dan Braun, Peter Conlon, David Crawford, and Mary Wharton.  The film was lensed by James Fideler, and edited by Mari Keiko Gonzalez.

Submarine Entertainment is a hybrid sales, production and distribution company run by twin brothers and co-founders Dan Braun and Josh Braun. Submarine has been responsible for the sale of six of the last twelve Academy Award winning documentaries: AMERICAN FACTORY, 20 FEET FROM STARDOM, MAN ON WIRE, THE COVE and SEARCHING FOR SUGAR MAN.  Submarine has recently been involved in the production and sale of multiple non-fiction series, including THE DEVIL NEXT DOOR, EVIL GENIUS, THE KEEPERS, LENOX HILL, PICK OF THE LITTER and WILD WILD COUNTRY, which won the Emmy for Best Documentary Series in 2018. Submarine’s principals also represent the comic book libraries Creepy and Eerie, which are being developed across all platforms.