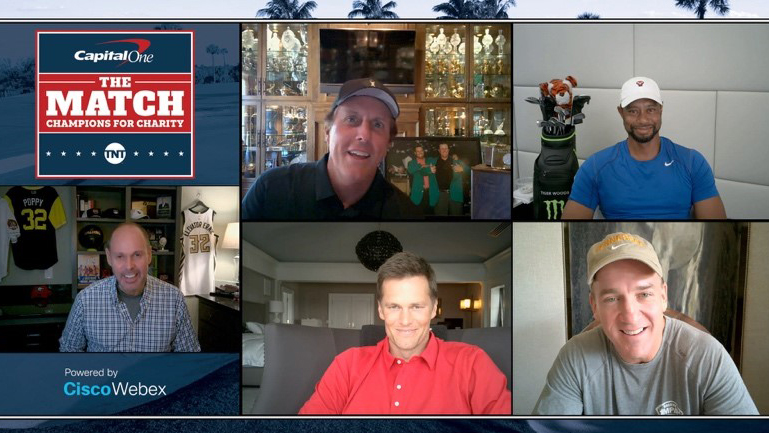 $10 Million Charitable Donation Made to COVID-19 Relief; Additional Fundraising to Include On-Course Challenges & Partnership with ALL IN Challenge

Capital One’s The Match: Champions for Charity to be Hosted at Prestigious
Medalist Golf Club in Florida

Turner Sports will present Capital One’s The Match: Champions for Charity, a blockbuster live golf competition headlined by golf icons Tiger Woods and Phil Mickelson returning for a rematch, this time joined by Tom Brady and Peyton Manning, two of the NFL’s greatest players of all time. The premier sports event – simulcast exclusively on TNT, TBS, truTV, and HLN – will be held Sunday, May 24, at 3 p.m. ET, with pre-match coverage available in the Bleacher Report app. It will also broadcast around the world on CNN International, reaching an additional 400 million households and hotel rooms in more than 200 countries and territories. Associated with the live telecast, WarnerMedia and the golfers will collectively make a charitable donation of $10 million to benefit COVID-19 relief. As part of the fundraising efforts, the competition will also include a partnership with the ALL IN Challenge, along with additional on-course competitive challenges for charity.

Fundraising associated with Capital One’s The Match: Champions for Charity will support national and local beneficiaries, aiming to help make an impact on many of the communities affected by the COVID-19 pandemic. Donations will be made to organizations working across multiple areas of need including Direct Relief, which equips health workers on the front lines with life-changing medical supplies; the American Red Cross, which has adapted its everyday emergency relief efforts to work within this new environment, including providing virtual support and collecting convalescent plasma for COVID-19 treatment; Save Small Business, a grant-making initiative to help small business employers who are struggling due to the pandemic; and the ALL IN Challenge, an initiative that aims to eliminate food insecurity by providing food to those in need.

In partnership with the ALL IN Challenge, all four participants will have donated custom experiences that will raise millions towards the cause, with viewers having the ability to enter into a live raffle for ones featuring Woods and Mickelson during the telecast as well.

“The COVID-19 pandemic has caused unimaginable tragedy and heartbreak,” said Jeff Zucker, Chairman, WarnerMedia News and Sports. “We’re hopeful this event and platform will help raise meaningful funding for COVID-19 relief, while also providing a source of brief distraction and entertainment for all sports fans.”

Capital One’s The Match: Champions for Charity, a sanctioned PGA TOUR event, will be held at the prestigious Medalist Golf Club in Hobe Sound, Fla. Opened in 1995, the renowned course acts as the home course to many PGA Tour players including Tiger Woods. In preparation for the event, tournament organizers are working with state and local government and public health officials on competition and production logistics to ensure the event follows safety and health protocols.

The competition will feature Woods and Manning vs. Mickelson and Brady, facing off in Team Match Play with a Four-Ball (Best Ball) format on the front nine and a Modified Alternate Shot format on the back nine, where each participant will tee off and then the team will play alternate shot from the selected drive. The unique combination of formats is aimed to provide an entertaining mix of strategy, team collaboration and consequence to nearly every shot. As part of the competitive play, there will also be a set of on-course challenges to raise additional charitable funds.

Live coverage airing on TNT, TBS, truTV, HLN and CNN International will feature unprecedented access with all players having open mics throughout the entire competition, including the capability to communicate directly with other golfers and the broadcast commentators. Commentators for the event will include host Brian Anderson, analysts Trevor Immelman and Charles Barkley, with on-course reporters Amanda Balionis and Justin Thomas. In addition to live televised coverage, social and digital content prior to the event will be available through Bleacher Report and House of Highlights.

Turner Sports is proud to be working with a number of marketing partners to host Capital One’s The Match: Champions for Charity, in service of maximizing COVID-19 relief. Capital One is returning as title sponsor and will collaborate closely with Turner Sports on a number of social, digital and broadcast integrations leading up to and during the live event.

“At Capital One, we’re committed to supporting our customers, communities and partners through this difficult time, and that is why we are proud to be the returning title sponsor of Capital One’s The Match: Champions for Charity. This wonderful event will bring four of the world’s best athletes together for a tremendous cause,” said Marc Mentry, Chief Brand Officer, Capital One. “Capital One knows our customers are passionate about sports, which is why we are excited to support this event and to help bring awareness to these amazing charities.”

Turner Sports, a division of WarnerMedia, is an industry leader in the delivery of premium sports content across all multimedia screens. Turner Sports’ television coverage includes the NBA, Major League Baseball, NCAA Division I Men’s Basketball Championship, the UEFA Champions League and UEFA Europa League, ELEAGUE and professional golf.  The division also manages some of the most popular sports destinations across digital and social platforms including Bleacher Report and its top-rated app, NCAA.com and the critically-acclaimed NCAA March Madness Live suite of products, as well as an accompanying collection of mobile sites and connected device apps.  Turner Sports and the NBA jointly manage NBA Digital, a robust collection of offerings including NBA TV, NBA.com, NBA LEAGUE PASS, the NBA App and NBAGLEAGUE.com. Turner Sports launched B/R Live in 2018 as a premium live streaming sports platform, serving as the central hub for both the discovery and consumption of live sports content. The streaming service allows fans to find and watch their favorite sports content anywhere, anytime and on the screen of their choice.

CNN’s portfolio of news and information services is available in seven different languages across all major TV, digital and mobile platforms, reaching more than 480 million households and hotel rooms around the globe. CNN International is the number one international TV news channel according to all major media surveys across Europe, the Middle East and Africa, the Asia Pacific region, and Latin America and has a US presence that includes CNNgo. CNN Digital is a leading network for online news, mobile news and social media. CNN is at the forefront of digital innovation and continues to invest heavily in expanding its digital global footprint, with a suite of award-winning digital properties and a range of strategic content partnerships, commercialised through a strong data-driven understanding of audience behaviours. CNN has won multiple prestigious awards around the world for its journalism. Around 1,000 hours of long-form series, documentaries and specials are produced every year by CNNI’s non-news programming division. CNN has 36 editorial offices and more than 1,100 affiliates worldwide through CNN Newsource. CNN International is a WarnerMedia company.