New CNN Original Series “The Windsors: Inside the Royal Dynasty” and Season Two of “Race for the White House” Debut Sunday, February 16 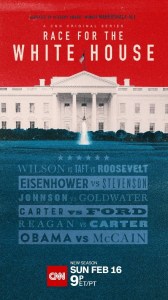 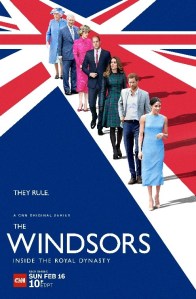 NEW YORK – Jan. 9, 2019 – It’s a night full of power, prestige and politics as CNN Original Series debuts the second season of Race for the White House at 9 p.m. (ET/PT) and the series premiere of The Windsors: Inside the Royal Dynasty at 10 p.m. (ET/PT) on Sunday, February 16.

Race for the White House is a six-part CNN Original Series narrated by Academy Award winner Mahershala Ali. Using rare archival footage, interviews, and stylized dramatizations, each episode of the docuseries tells the story of one iconic campaign for the Presidency of the United States. From powerful speeches to dirty tricks and Machiavellian schemes, Race for the White House captures the tension and drama of high-stakes presidential elections and reflects on their impact.

The six elections covered are: 1912 Wilson vs. Roosevelt vs. Taft; 1952 Eisenhower vs. Stevenson; 1964 Johnson vs. Goldwater; 1976 Carter vs. Ford; 1980 Reagan vs. Carter; 2008 Obama vs. McCain. The season two premiere tracks the history-making 2008 race between freshman senator Barack Obama and Senator John McCain.

Executive producers for Race for the White House are Louise Norman and Melanie Archer for Raw (American Dynasties: The Kennedys), Amy Entelis and Lizzie Fox for CNN Original Series and Dana Brunetti.

The Windsors: Inside the Royal Dynasty is a six-part CNN Original Series, narrated by Academy Award-nominated actress Rosamund Pike, that tells the incredible, dramatic and emotional tale of the British Royal Family known as The Windsors. From the calamity of Wallis Simpson to the tragedy of Diana to the triumph of the recent Royal wedding, the docuseries uses stunning, rarely seen footage and interviews with insiders to weave together the true story of a family that has survived war, divorce, and scandal to against all odds, thrive in the modern world. The series premiere, “Succession,” follows King Edward VIII’s decision to abdicate the throne and marry American divorcee Wallis Simpson, leaving his younger brother Bertie to reluctantly become King George VI and try to repair the damage done to the monarchy.

Executive producers for The Windsors are Louise Norman for Raw, Amy Entelis and Lyle Gamm for CNN Original Series .

Race for the White House and The Windsors will stream live for subscribers the day of their premieres via CNNgo (at CNN.com/go and via CNNgo apps for Apple TV, Roku, Amazon Fire, Samsung Smart TV and Android TV) and on the CNN mobile apps for iOS and Android. Ahead of the linear premiere, starting February 7, the third episode of The Windsors, “Young Queen Elizabeth,” (wt) will be available on demand to subscribers via cable/satellite systems, CNNgo platforms and CNN mobile apps. Episodes of both series will be available the day after their broadcast premiere on demand via cable/satellite systems, CNNgo platform and CNN mobile apps.