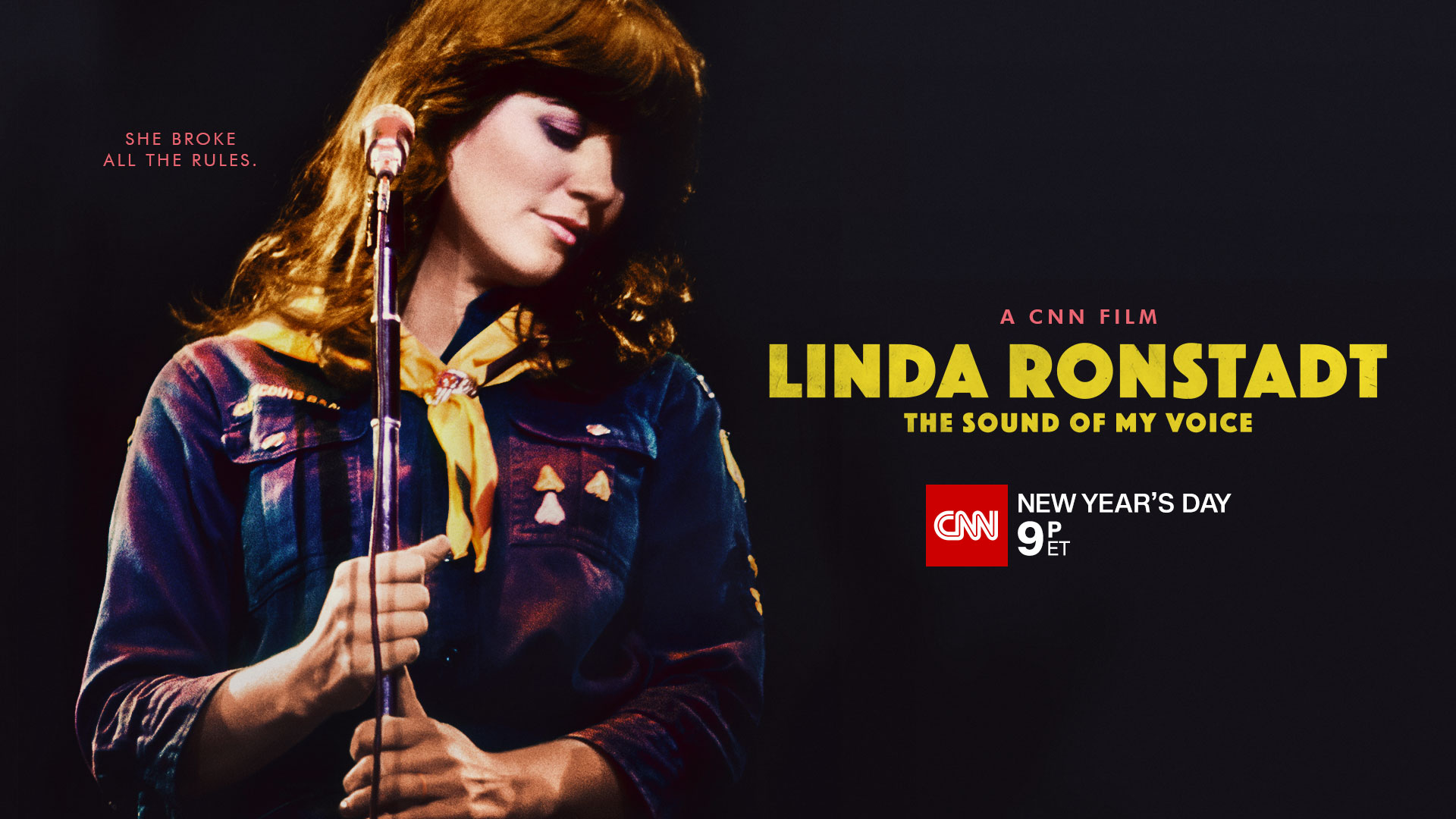 Linda Ronstadt soared to the top of the music scene in the late 1960s, and remained there for nearly five decades.  Her cross-genre songbook packed arenas, racked up 11 platinum albums, and solidified her goddess-like legend as the first female artist to top the Pop, Country, and R&B music charts simultaneously.  She earned 10 Grammy® Awards on an astounding 26 career nominations.  LINDA RONSTADT: The Sound of My Voice, will premiere as a CNN Films documentary on Wednesday, New Year’s Day, at 9:00pm ET and PT on CNN.  LINDA RONSTADT: The Sound of My Voice will encore Saturday, Jan. 4 at 9:00pm ET, and Sunday, Jan. 5 at 12:00am ET, on CNN.

The 2019 Critics’ Choice Documentary Awards winner for Best Music Documentary about her life and musical journey is directed by Rob Epstein and Jeffrey Friedman, and is a PCH Films and  Telling Pictures production.

“Linda is inspiring.  She was one of the most successful pop stars of all time, but she couldn’t have cared less about celebrity and she never let it distract her,” said Friedman, director and producer for the film with Epstein.  “She had an artistic restlessness that led her to explore – and master – an astonishing range of styles of genres,” he continued.

“For Linda, it was always about the music.  She was a musical adventurer and we set out to make a film that would the audience along on that long, groundbreaking adventure,” said Epstein.

Ronstadt narrates her own story over footage of her personal photos, archival film of her concert performances and music videos, while guiding viewers through her early years in Tucson, singing Mexican canciones with her family, her folk music days as a co-founder of the Stone Poneys, and her famed, genre-defying musical collaborations.  Viewers of the film are treated to Ronstadt’s personal stories behind favorites including, “You’re No Good,” “Blue Bayou,” and “When Will I Be Loved,” learning how her powerful vocal range gave her singing a searing intensity that created devoted fans, even among her musical peers.

Golden Globe® winning producer James Keach, who has been part of some of the most groundbreaking musical films in recent years, said, “when Linda asked us to go to Mexico with her, I was as surprised as everyone when she then asked me to film her singing harmony with her nephew and cousin on a favorite family traditional Mexican folk song.  She had not sung in public since 2009.  For me, this was one of the most poignant moments of my career.”

“Rob and Jeffrey have crafted a film that soulfully captures how Linda Ronstadt broke the mold for female artists all while remaining true to herself,” said Courtney Sexton, senior vice president for CNN Films.  “And, once again, James Keach has delivered another powerful portrait of a music icon,” said Sexton.  Sexton and Amy Entelis, executive vice president for talent and content development for CNN Worldwide, are both executive producers for the film.

Ronstadt also describes for the film how she came to make magical duets with other legendary soul, blues, folk, and Spanish-language artists, including James Ingram, Aaron Neville, Bonnie Raitt, Mariachi Vargas, and more, many of whom contribute interviews to the documentary.  And, Ronstadt reveals the initial resistance from label executives to the ‘Trio.’  Ronstadt, Dolly Parton, and Emmylou Harris generated new fans that craved their harmonies and storied performances of hits such as “Telling Me Lies,” “Wildflowers,” and “To Know Him Is To Love Him,” all while subversively influencing the male-dominated country music genre with their award-winning albums.

LINDA RONSTADT: The Sound of My Voice was produced by James Keach and PCH Films, who previously teamed with CNN Films for the acquisition and broadcast of GLEN CAMPBELL…I’ll Be Me.  The CNN Films Presents broadcast of that film raised awareness to the singer’s life with Alzheimer’s disease, and debuted to more than 3M total viewers on the network in 2015.

More recently, CNN Films executive produced the Todd Douglas Miller-directed and produced APOLLO 11, an archival documentary exploring the historic NASA mission that resulted in humanity’s first steps on the moon and safe return home.  SCANDALOUS, about the history and cultural influence of the National Enquirer newspaper, is directed by Mark Landsman and is now in theaters.

During the New Year’s Day premiere on CNN, LINDA RONSTADT: The Sound of My Voice will stream live for subscribers via CNNgo (CNN.com/go and via CNNgo apps for Apple TV, Roku, Amazon Fire, Chromecast, Samsung Smart TV, and Android TV) and on the CNN mobile apps for iOS and Android. The film will be available beginning Thursday, January 02, on demand via cable/satellite systems, CNNgo platforms, and CNN mobile apps.

PCH Films, based in Los Angeles, California and founded by James Keach in 2007, is a multimedia company that develops, produces, and finances content for feature film, television, documentaries, animation and music. The company’s extensive credits include the award-winning films WALK THE LINE, documentary GLEN CAMPBELL…I’LL BE ME and DAVID CROSBY: REMEMBER MY NAME. PCH has recently completed three films focused on Neurodegenerative diseases including the Glen Campbell film, AUGIE and TURNING POINT.