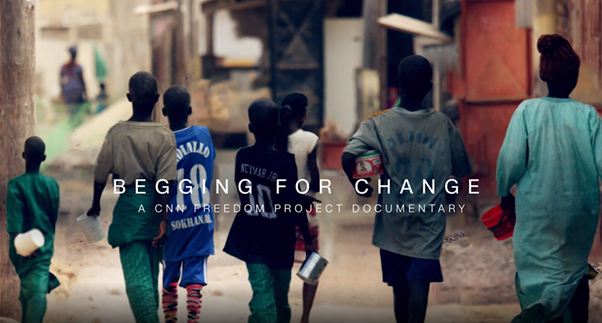 Forced begging is the most prevalent form of human trafficking in the West African nation of Senegal. Human Rights Watch now estimates that more than 100,000 talibés – children living in religious schools to learn the Quran –  are being forced to beg for food or money every day.

In Begging for Change, The CNN Freedom Project travels to Senegal with Dominika Kulczyk of Kulczyk Foundation to expose the shocking reality of everyday life for these young boys.

Most live far away from home, sent by their parents to study the Quran and live under the care of marabouts, Quranic teachers who run the daara. The sad truth however is that many of these children end up living in squalor, without food, medical care or even a roof over their head, and many say they have lost all contact with their families.

The half-hour documentary focuses on Senegalese charity worker Issa Kouyate and his organisation Maison de la Gare. For more than a decade Kouyate has worked to save these boys and to change the mentality of the people who have allowed this abuse to become a part of Senegalese culture.

“People say human trafficking happens in the shadows. In Senegal, it’s not like that. In Senegal it’s so obvious, so out in the open. It’s shocking,” says Kouyate.

He adds: The marabout “is supposed to take care of them, but these boys are neglected, sometimes abused, sometimes exploited. The daara was supposed to teach children the Quran. But most of the daaras, are only teaching them how to get money from the streets. This is not learning Quran. This is just exploitation. It’s trafficking. It’s slavery.”

One marabout confirms to CNN that he encourages the children in his daara to beg: “Yes, they have to go beg. If not, we will never do anything, we can’t stop working, so we have to work from the kids. They have to go get money, get food and bring it.”

Kouyate says that if the talibés refuse to beg or do not make enough money, then they will be beaten by their marabouts. However, one marabout disputes this claim to CNN and says the boys are lying.

At the end of the documentary CNN meets Khadim, one of the first boys rescued by Maison de la Gare. He had run away from his daara after suffering years of alleged abuse there. After several months of rehabilitation at Kouyate’s home, Khadim returned to his village to find his mother, who said she would never send him back to a daara away from home. Khadim is now a farmer, helping families in his village and finally living a happy, healthy life.

Begging for Change: A CNN Freedom Project Documentary is produced in collaboration with Kulczyk Foundation and airs at the following times:

The CNN Freedom Project produces original reports, articles and documentaries on human trafficking in all its forms – from debt bondage in India to sex trafficking rings in Southern California and African slaves in the Sinai desert. Since its launch in 2011, the multi-award-winning CNN Freedom Project is among the most successful and highly visible programming initiatives on CNN International. It has generated more than 1,000 investigative stories of modern-day slavery from across five continents. Various NGOs report that these CNN Freedom Project stories have contributed to changing laws and corporate policies, led to more than 1,000 survivors receiving assistance and sparked more than $24 million in donations to anti-trafficking organizations. Follow us on Twitter @CNNFreedom #Beggingforchange

Kulczyk Foundation is a private foundation established in 2013 by Grazyna Kulczyk, Dr Jan Kulczyk and Dominika Kulczyk in Warsaw, Poland. The primary aim of the Foundation is to fight the issues of discrimination and inequality, in order to create a world without barriers. Together with its partners, the Foundation drives societal change through sustainable solutions, which the Foundation calls the ‘Domino Effect’.