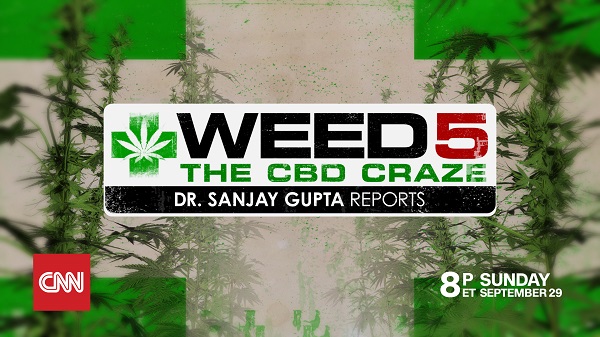 More than six years ago, Dr. Sanjay Gupta set out to investigate the science behind medical marijuana.  A year later WEED, the first documentary in the award-winning series aired on CNN with an accompanying op-ed penned by Gupta: “Why I Changed my Mind on Weed.”  Now, his fifth documentary WEED 5: The CBD Craze, will premiere on Sunday, September 29th at 8pm ET/PT, with Gupta returning to Colorado where he started his journey and introduced viewers for the first time to the word few could even pronounce – Cannabidiol (CBD).

CBD will soon be a $22-billion-dollar industry and can be found everywhere, in every formulation – from lotions to lattes to pet products to popcorn.  Available throughout the U.S. in grocery stores, coffee shops and spas, Dr. Gupta sets out across the country and around the world searching for the truth behind the craze.

Though we know it doesn’t get you high, there isn’t much more we know about the CBD in our products; the research is slim, but success stories are not.  Many lives have changed for the better, but we are now learning of lives changed for the worse.  In WEED 5, Gupta investigates the CBD industry and finds what we once thought was harmless, could be dangerous because of an industry that is wholly unregulated.

Dr. Sanjay Gupta Reports: WEED 5: The CBD Craze will stream live for subscribers the day of its premiere via CNN.com/go and via CNNgo apps for Apple TV, Roku, Amazon Fire, Samsung Smart TV and Android TV) and on the CNN mobile apps for iOS and Android. It will also be available the day after the broadcast premiere on demand via cable/satellite systems, CNNgo platform and CNN mobile apps.