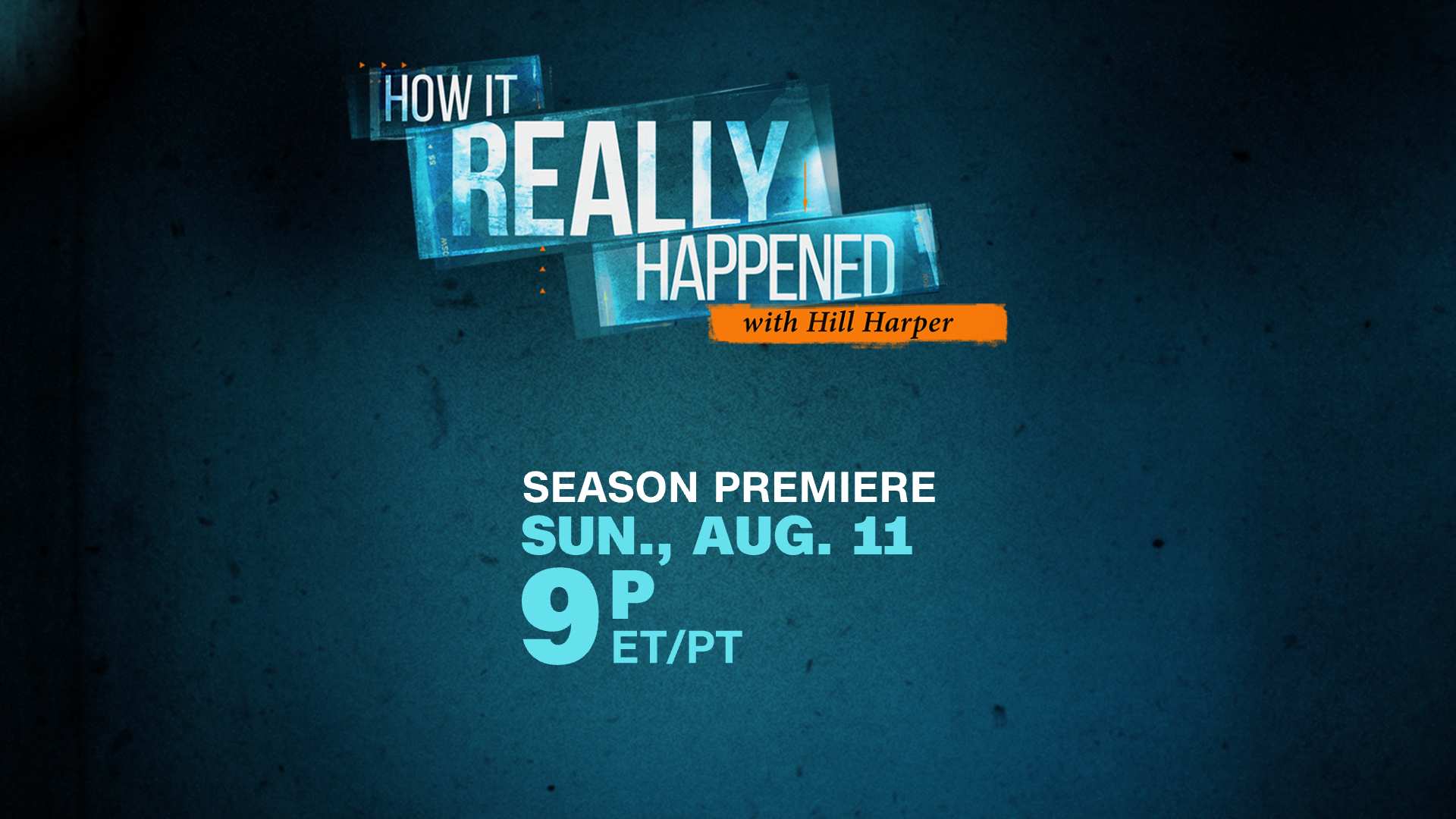 July 30, 2019 – The chilling story of the Gainesville, Florida serial murders, which terrified students, state residents and captivated the nation, launches the fourth season of the popular HLN Original Series How It Really Happened with Hill Harper in a two-part episode premiering Sunday, August 11 at 9pm-11pm ET/PT.

The Gainesville season premiere episode offers rich insight into these crimes through rare interviews with family members of the victims and those closest to the events including the doctor to whom the killer confessed.

Also profiled this season are Drew Peterson, suspected of killing his last wife, and accused of killing his previous wife, and former teen idol David Cassidy, who candidly reveals his secret demons just days before his untimely death.

The new season includes three other two-hour episodes: the Elizabeth Smart kidnapping, the Susan Smith child murders and the Oklahoma City Bombing, the later featuring first person perspective from a rarely heard interview with Timothy McVeigh. This season finale marks the 50th episode milestone of How It Really Happened with Hill Harper.

Produced by HLN Original Series, Nancy Duffy is executive producer of How It Really Happened with Hill Harper.

How It Really Happened with Hill Harper will stream live for subscribers via CNNgo (at CNN.com/go and via CNNgo apps for Apple TV, Roku, Amazon Fire, Samsung Smart TV and Android TV) and on the CNN mobile apps for iOS and Android. Additionally, all series episodes will be available on demand after their broadcast premiere via cable/satellite systems.

Following are airdates and episode descriptions for season four of How It Really Happened with Hill Harper:

The Mystery of The Gainesville Murders, part 1: During a terrifying three-day period in late August 1990, five college students were found brutally murdered in Gainesville, Florida.  Panic filled the usually sunny city as investigators searched to find the serial killer before he struck again.  Finally, a named suspect comes into focus… but was he the murderer?  For months, only a psychologist and the actual killer himself knew the truth.  Family members of the victims share their harrowing stories of loss and life in fear.  And investigators take us through how the then-emerging DNA technology helped bring the serial killer to justice.

The Mystery of the Gainesville Murders, part 2:

During a terrifying three-day period in late August 1990, five college students were found brutally murdered in Gainesville, Florida. But it would take investigators months – and the discovery of a campsite, a screwdriver and an audio tape – before they identified who the serial killer was… and the suspected killer would not make the road to justice easy for anyone. (Sabina Ryman is the senior producer, and Alison O’Brien is the producer of this two-part episode.)

The Kidnapping of Elizabeth Smart: Hiding in Plain Sight, part 1: June 5th, 2002, Elizabeth Smart was kidnapped from her Salt Lake city home—snatched from her bed at knifepoint by a mysterious man in the middle of the night.  To the public it seemed as if she had vanished into thin air- but she was actually taken by Brian David Mitchell- a 48 year old pedophile.  In this special “How It Really Happened,” we take a look at the unbelievable nine month saga with its unforeseeable twists and turns…a police investigation that went sideways, and a family fighting to keep hope alive

The Kidnapping of Elizabeth Smart: Hiding in Plain Sight, part 2:

For nine months, in 2002, 14 year old, Elizabeth Smart was the most famous missing child in America.  Kidnapped by Brian David Mitchell, she was forced up into a hiding spot in the mountains behind her home—assaulted and forced to be his second “wife.”   This episode follows the harrowing of her 9 month ordeal – including the multiple trips they took to Salt Lake City where she was hidden in plain sight. And the unbelievable end —one of the most incredible kidnapping recoveries in U.S. history. (Marvin Daye and Monica Hill are the senior producers of this two-part episode)

Susan Smith: Someone Stole My Babies, part 1: On the night of October 25, 1994, Susan Smith, reported that she had been carjacked.  Her two young sons, three-year-old Michael and 14-month-old Alexander, who were in the backseat of the car, had been abducted.  That report set off a nine-day, nationwide search for the boys who, along with the car and the kidnapper, seemed to have vanished.  While the world awaited word that Michael and Alex were found safe, investigators delivered news that shocked everyone.

For nine days, the nation awaited any news as to the whereabouts of missing boys, 3-year-Michael and 14-month-old Alex Smith.  Then a break in the case – one that would shock everyone. In a rare interview, David Smith, the father of the boys, shares his heartbreaking story of their death and the ultimate deception at the hands of his then-wife.  And the investigators take us behind-the-scenes as they followed clues that led them to the horrifying truth.  (Sabina Ryman is the senior producer, and Alison O’Brien is the producer of this two-part episode.)

On October 28th, 2007, 23-year-old Stacy Peterson, the wife of veteran police sergeant, Drew Peterson, goes missing.  As Bolingbrook, Illinois police launch an intensive search to find her, the case of the missing mother raises shocking new questions about the death of Drew Peterson’s third wife, Kathleen Savio, who died three years earlier in her bathtub and whose death was ruled an accidental drowning.  In interviews with friends and family of both victims as well as those intimately involved in the investigation, the episode reveals how in the final days before Stacy’s disappearance, she left clues that would ultimately seal her husband’s fate. (Loren Michelman is the senior producer, and Linda Zaleskie is the producer of this episode.)

1970’s Teen Idol David Cassidy became an sensation overnight. He made it big on the hit show The Partridge Family, and with it

came worldwide pop concert tours that sold out stadiums all over the world. But instant fame and shocking tragedy were too much to handle. Cassidy suddenly walked away from it all at the height of his career, and turned to a dark and lonely place to numb his emotional pain. Then, after years out of the spotlight Cassidy makes a comeback… He starred on Broadway, hit the Las Vegas strip and even returned to touring. He was happiest on stage. But happiness off stage was hard to find and Cassidy was keeping gloomy secrets from everyone he loved. In the end, even his death was surrounded by mystery leaving his family, friends and fans with more questions than answers. (John Wasley is the senior producer and Denise Cavanugh is the producer of this episode.)

The Bombing of Oklahoma City, part 1: On April 19, 1995, Timothy McVeigh, a 26-year-old U.S. army veteran, detonated a 7,000 pound truck bomb outside the Alfred Murrah Federal Building in downtown Oklahoma City, claiming the lives of 168 innocent people.  We take a look back at the events that led up to the largest domestic terrorist attack in the history of the United States. Told through exclusive interviews with survivors of the bombing, first responders, FBI investigators, and Timothy McVeigh himself in extensive never-before heard audio recordings taped before his execution, this program takes you inside the mind of a terrorist to try to understand How It Really Happened.

The Bombing of Oklahoma City, part 2:

After Timothy McVeigh’s truck bomb claimed the lives of 168 innocent people, including 19 small children, the world was asking why. Why would a young army veteran – a man who once fought for the lives of all Americans – want to cause such unspeakable devastation? In an exclusive prison interview, Timothy McVeigh himself describes how events in his personal life – and in the ever-changing world around him – inspired him to take action against his fellow Americans? We also hear from survivors of the bombing, as well as family members of victims, who describe the full impact of that fateful day. (Loen Kelley is the senior producer, and Alex Pressberg is the producer of this episode.)