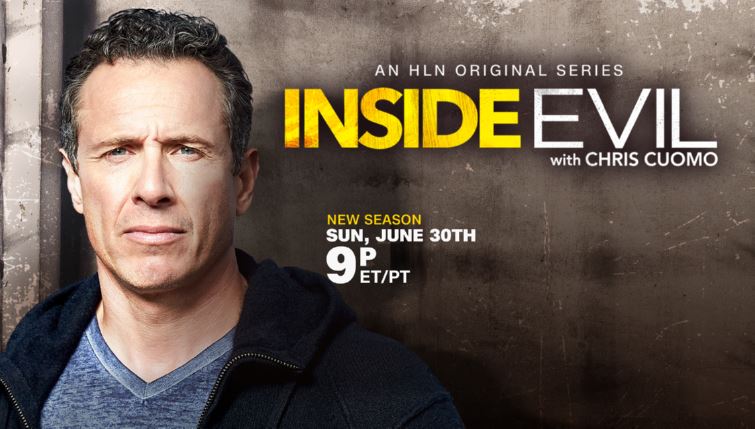 Inside Evil with Chris Cuomo returns to HLN on Sunday, June 30 at 9pm ET/PT with the two-hour season three premiere featuring CNN anchor Chris Cuomo’s exclusive final interview with convicted serial killer Andrew Urdiales. Cuomo speaks with Urdiales on the day he’s being sent to death row and tries to understand why this madman chose to kill multiple women in cold blood. Was he insane? Did he hate women? Were there clues in his childhood?

Over five one-hour episodes, Cuomo investigates how nature versus nurture shaped Urdiales and led some of America’s most dangerous criminals down deadly paths of destruction. Speaking at length with the killers, the victims who experienced the violence, detectives, scientists and experts who have studied the cases, Cuomo seeks out the science and psychology of evil.

Season three of Inside Evil features interviews with Paris Lee Bennett who killed his 4-year-old-sister when he was just 13 and is serving 40 years in prison; Lisa Harris who as a teen, committed a violent murder which she says was an act of revenge… she is hoping for parole 30 years later; and Sing Sing inmate No. 04A0823, John J. Lennon who is currently serving a 28 year to life sentence for the cold-blooded murder of a fellow drug dealer, and has traded his gun for a pen in prison.

Inside Evil with Chris Cuomo is part of HLN’s original series slate of true crime, mysteries and investigations. The internally developed programming under the direction of CNN Original Series will follow new episodes of season four of Death Row Stories. The eight-part series premiered on June 2 and airs Sundays at 8pm ET/PT.

Viewers can watch Inside Evil on HLN every Sunday at 9pm ET/PT and catch up on previously aired episodes on HLN On Demand one day after the original airdates.

Following is the Inside Evil with Chris Cuomo episode guide:

Confessions of a Serial Killer Part I (airdate: June 30)

Few have heard the name, Andrew Urdiales, which is frightening because he’s been convicted of killing more women than Jack the Ripper. Between 1986 and 1996, Urdiales hunted and murdered eight women for seemingly no reason, in cold blood. Their cases were unsolved and unconnected until Illinois police arrested Urdiales in 1997. Within minutes of his first interrogation, he admitted to three murders in Illinois, and mentioned another five homicides and a failed attempt at an abduction in California. Chris Cuomo speaks with the one woman who got away, Jennifer Asbenson who shares the terrifying story of her encounter with Urdiales and her dramatic escape.

Chris Cuomo tries to get inside the mind of Andrew Urdiales in the final interview he will ever give. Was he insane? Did he hate women? What went wrong in his childhood to turn this man into such a monster? CNN courtroom footage of Urdiales standing trial for the five homicides in California show him as he was extradited to face the death penalty. Would he finally be sentenced to death?

Murder in the Family (airdate: July 7)

Charity Lee has the uniquely tragic misfortune of being the mother of a young daughter who was murdered, and the mother of the teenage boy who killed her. She essentially lost both of her children on the night of February 4, 2007, when police came to her workplace to share the unfathomable news. Her son, Paris Lee Bennett would never return home and was sentenced to 40 years in prison. Chris Cuomo travels to Texas to speak with Paris, now 25, in a maximum-security prison, to find out what drove him to murder the sister he claims to have loved.

In the Ozarks, some people feel the need to take justice into their own hands. On a bleak morning in 1987, a distraught 19-year-old Jennifer Fair returned to her apartment which she shared with friends crying that she had been raped by a local businessman, John Hill. The teenagers set out to find him and, hell-bent on revenge, commit one of the most heinous crimes the Ozarks has ever seen. Chris Cuomo travels to southwestern Missouri to speak with members of the group, including Lisa Harris who is still in prison 30 years later. Chris talks to the members who have long since done their time, and they explain why believe Lisa deserves a shot at freedom like everybody else. Does a terrible teenage decision have to last a lifetime?

A truth-is-stranger-than-fiction scenario is playing out in a dangerous maximum-security prison where a mind-hunter is seeking answers…as a convicted killer himself. Sing Sing inmate No. 04A0823, John J. Lennon is currently serving a 28 year to life sentence for the cold-blooded murder of a fellow drug dealer. He killed him with a machine gun at close range. Lennon has spent years behind bars at the most notorious prisons in New York where he learned to utilize his unique access to the killers around him and built a career writing about the system, infamous inmates and criminal justice issues. Chris Cuomo talks to John about his crime, doing his time and why he traded his gun for a pen.