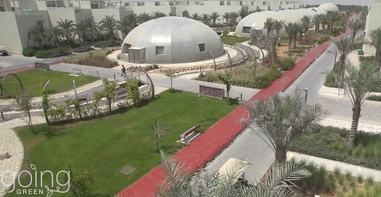 This month’s programming highlights on CNN International, including shows such as Going Green, The 100 Club and Click Culture:

In the latest edition of Going Green, the programme explores how city dwellers are taking an active role in protecting the environment.

CNN travels around the globe to profile the individuals at the forefront of sustainable change. In Singapore, Going Green meets Alan Lee, who is on a quest to minimise the negative impact of construction.

Meanwhile in Dubai, real estate developer Faris Saeed tells CNN how he wants his city to go green and with tree-lined borders and urban farms, he is well on his way to fighting back against the harms of urbanization.

With rising pollution levels in Nairobi, environmental activist Sam Dindi is cleaning up the city’s rivers and urban spaces whilst also raising awareness amongst his community to make the city a greener and cleaner place to live.

In Cairo, two brothers are on a mission to bring urban gardens and rooftop agriculture to the urban jungle. Through their sustainable living company, Schaduf, Sherif and Tarek Hosny hope to bring food security and self-sufficiency to low-income communities, enabling some to grow and sell their crops.

In Beirut, Ziad Abi Chaker has founded the Green Glass Recycling Initiative Lebanon, which takes glass, breaks it down and turns it into stylish and affordable lamps, glasses, and vases through the ancient art of glass blowing.

Finally, in Delhi, street children at Karrmaurg are turning discarded waste into bags, wallets, stationary and more. The children are re-cycling Delhi’s trash and trading it for a better life.

Did you know the first edition of Encyclopaedia Britannica was published in 1768?  Or that The Hershey Company originally started in 1894 by making caramels before they found the recipe to success with chocolate?

Finding long lasting success as a company can be elusive, but the ones that make it for more than a century all have one thing in common: the ability to adapt to changing taste and technology.

CNN’s Cyril Vanier explores the stories behind famous brands that have survived and thrived for more than 100 years.

The Southeast Asian kingdom of Thailand has grand ambitions to become a technology hub for the region.

Host Kristie Lu Stout explores the pulse of Thai tech to find out the pressure points, as well as the unique opportunities for both local and foreign tech entrepreneurs and investors.

CNN hears from tech experts and visits the tech-centric locations, including co-working spaces and a “digital park,” to find out where Thailand, with its high-tech hopes, is going next.

On this month’s episode of CNN World Rugby, the programme explores the fascination of rugby on the British Isles.

During the programme, CNN travels to the Shetland Islands to learn about the most remote rugby club in Europe.

Next, CNN World Rugby travels Ireland to discover how rugby has played a significant in uniting Ireland in a way nothing else can.

In Wales, CNN discovers how a small mining town has kept rugby at the heart of the community before travelling to London to reflect on the final two Sevens tournaments in the British and French capitals.

This month, CNN explores the richness of Vietnam’s traditional culture and how it is being kept alive in the age of modernisation.

In Hanoi, CNN learns of how bamboo, an age-old symbol of strength and longevity, is still used by craftsmen to make Vietnamese bamboo zithers by hand. These same instruments are also used by the orchestra that performs for Hanoi’s “My Village”. Part dance, part cirque-de-soleil, the production features dozens of actors who perform acrobatics on stage with tall stalks of bamboo.

Next, the programme travels to Sapa, a small town in the mountains of northwestern Vietnam which was originally founded as a hill-station for French colonials. Toda visitors come to discover local handicrafts such as hand-woven clothing. With more tourists coming each year, CNN discovers how new hotels are being set up, including the Hotel de la Coupole, the first five-star hotel in this remote village, which aims to preserve local heritage.

Lastly, The Keepers travels to Hoi An, one of the country’s best-preserved ancient towns which also serves as the country’s culinary capital. The most famous local dish of cao lau, a bowl of noodles with grilled pork, is steeped in tradition. CNN learns how authentic cao lau must be made with water from one town well and cooked with tree bark from an island off Hoi An. Here, the programme gets a tour of the city’s food scene with author, restaurant owner and local resident Trinh Vy.