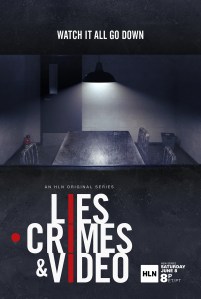 May 28, 2019 – There will be no hiding from the camera in the HLN Original Series Lies, Crimes & Video, premiering Saturday, June 8 at 8pm ET.

“Liz and her expert production team have a long, prolific news gathering history at HLN,” said Todd. “Veterans of such high-profile programs as Nancy Grace, Crime & Justice with Ashleigh Banfield and numerous specials, the HLN Investigations team will further fortify our network’s strength and leadership within the crime and investigations genre.”

Following are airdates and episode descriptions for Lies, Crimes & Video:

June 8, 2019 (series premiere) “Crazy, Sexy & Deadly” Shayna Hubers and Ryan Poston seemed like a match made in heaven, until he ends up dead in a pool of blood—shot in the face. Stunning interrogation tapes leave cops in disbelief and lead investigators to a surprising motive.

June 15, 2019 “Chained by a Serial Killer” Prominent realtor Todd Kohlhepp’s double life is exposed when police launch a dramatic rescue – all caught on body camera – of a young woman chained inside a shipping container on his property. But that’s not the only shocking surprise.

June 22, 2019 “Shopping with a Killer” 8-year-old Cherish Perrywinkle is lured out of a Walmart by a registered sex offender—but that’s just the beginning of a night of terror, all caught on camera.

June 29, 2019 “Murder in the Church” Missy Bevers was a mom-of-3 and a sought-out fitness instructor in her community. As she’s setting up for an early-morning workout class at the local church, surveillance cameras capture a disturbing series of images—her killer, lurking the halls.

July 6, 2019  “If Looks Could Kill” Model Tara Lambert hires a hitman to kill her husband’s ex and put her in a woodchipper—but what she didn’t know was that cameras were rolling.

July 13, 2019  “Killer Dad: Chris Watts Speaks” “Loving” father Chris Watts turns into one of the nation’s most notorious killers overnight. Secret videos document a series of chilling murders from start to finish—revealing lies, a scandalous affair and a shocking cover-up.

July 20, 2019  “Horror in Apartment 345” Gorgeous 27-year-old Sasha Samsudean appears to be sexually assaulted and is found strangled in her luxury downtown Orlando apartment. Shocking surveillance video and a slew of clues ultimately lead investigators to the killer.

July 27, 2019  “Killer at College” Beautiful college lacrosse player Yeardley Love is found dead in her college apartment. But the community is left stunned when cops arrest a member of a wealthy, prominent family.

Lies, Crimes & Video will stream live for subscribers via CNNgo (at CNN.com/go and via CNNgo apps for Apple TV, Roku, Amazon Fire, Samsung Smart TV and Android TV) and on the CNN mobile apps for iOS and Android. Additionally, all episodes will be available on demand the day after their broadcast premiere via cable/satellite systems.