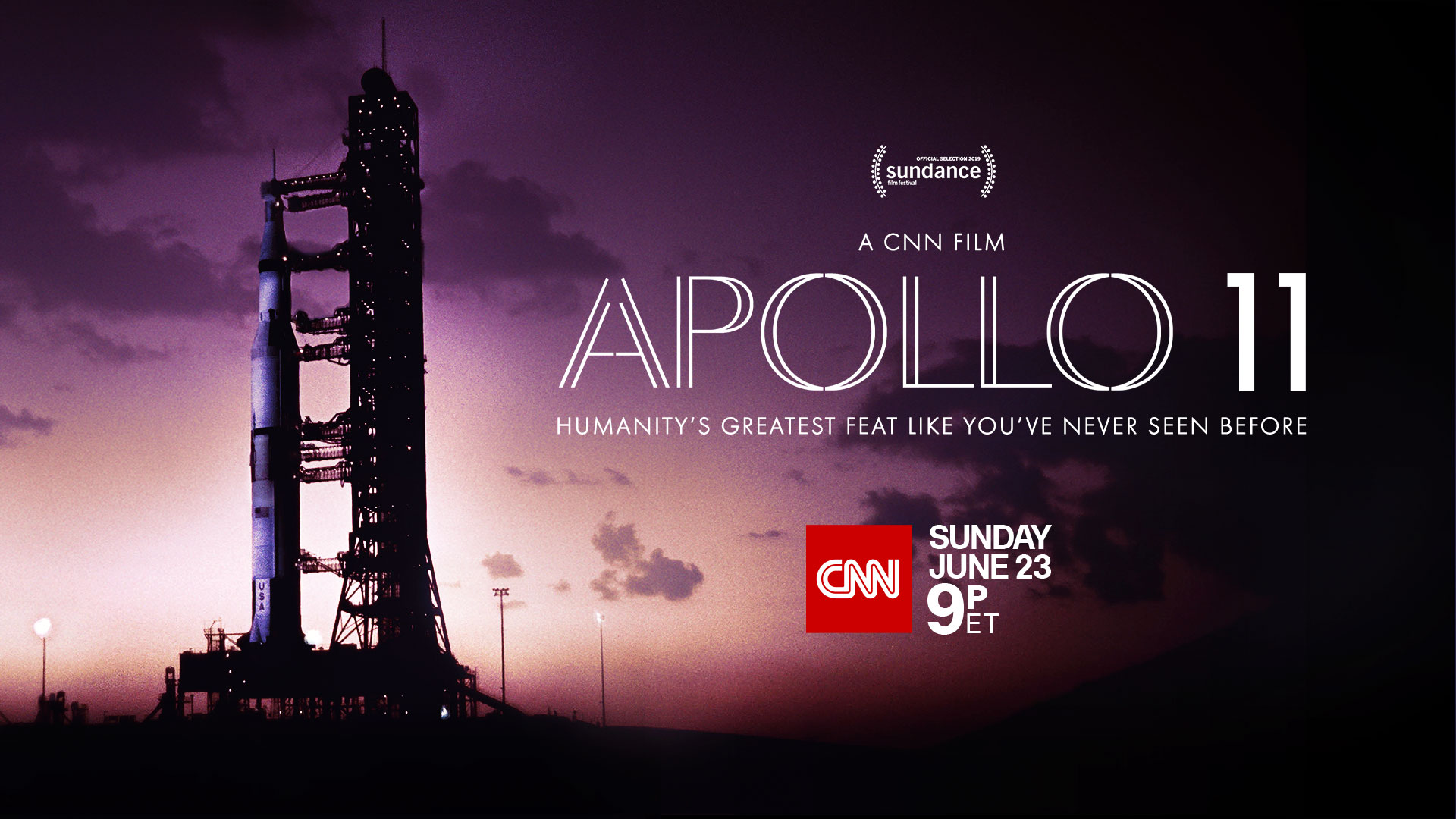 Land Rover and Samsung Board ‘APOLLO 11’ for CNN Films

This summer, CNN Films will commemorate the 50th anniversary of humanity’s first steps on the moon with ‘APOLLO 11’: a feature documentary developed from newly-discovered archival footage from NASA and the National Archives. Land Rover North America and Samsung are presenting sponsors of the special CNN Films presentation in recognition of this global cultural and historic moment through multimedia campaigns that celebrate the exhilarating potential of human exploration, and seek to inspire the next-generation of space travel.

‘APOLLO 11’ is a cinematic event 50 years in the making. Crafted from a newly-discovered trove of 70mm footage, and more than 11,000 hours of uncatalogued audio recordings, the film takes audiences straight to the heart of NASA’s most celebrated mission that first put men on the moon, and forever made Neil Armstrong, Buzz Aldrin, and Michael Collins into household names.

“We knew Todd would create something special when we approached him a few years ago, but the immersive perspective of ‘APOLLO 11’ so fully recreates the experience of the original events that viewers will feel they are watching the original lunar mission…rather than a documentary. The presenting sponsors, Land Rover and Samsung, reflect the same spirit of exploration of the historic events,” said Amy Entelis, executive vice president for talent and content development for CNN Worldwide and, with Courtney Sexton, vice president for CNN Films, an executive producer for ‘APOLLO 11.’

Land Rover will promote the 2019 Land Rover Discovery, a full-size SUV with seven seats that brings new levels of sophistication, capability and versatility to the Discovery family. The vehicle also features the latest connectivity technologies, a variety of innovative storage solutions and the Land Rover brand’s storied on- and off-road capabilities. Bringing to life the vehicle’s acclaimed “Above and Beyond” and “Never Stop Discovering” brand message, CNN’s brand studio Courageous developed branded content that examines the fundamental human trait of discovery through the lens of two women on the frontier of modern space exploration.

For the first time, Courageous produced branded content for the giant screen, which will marry Land Rover in perpetuity to “Apollo 11: First Steps Edition,” a giant screen version of the film for exhibition in museums and science centers. The thirty-second spot was shot at a remote Mars desert research station, mastered on 70MM film print, and features Shawna Pandya, a citizen-science astronaut candidate. A longer-form version of Pandya’s story about forging her personal trail to set foot on Mars will run across CNN’s digital and social properties, and take over full commercial pods during the film’s television run.

The second video will feature Natalie Panek, who shares her journey to become an aerospace engineer working on the planned international ExoMars rover and how she mentors the next crop of space engineers. The creative will launch across CNN’s television, digital and social footprint in the coming weeks. In both spots, the Discovery is organically woven into the narrative, serving as the vehicle that enables these women to explore the edges of their unknowns.

Land Rover will also sponsor a virtual reality, 360-degree video entitled “The Next 50 Years of Space Travel,” which includes logo integration in the opening sequence. This CNN editorial galactic journey will conceive the next 50 years in space, featuring experts and big dreamers who lay out their visions for the future – from Martian colonies and lunar outposts, to the possibility of hyperspace and interstellar tourism. The overall program was created in collaboration with dentsu X, media agency of record for Jaguar Land Rover.

Samsung has also landed on a cutting-edge, cross-platform campaign that features the brand’s QLED 8K TV, aligning the new era of picture quality with the technical feat of the film’s production. Courageous is producing branded content for Samsung’s QLED 8K TV that features retired astronaut Scott Kelly narrating a personal experience from his space travel. The creative will launch on the anniversary of the moon landing across CNN’s social handles.

Samsung will also sponsor a three-part digital video series tied to the anniversary. This CNN editorial endeavor will spotlight a new generation of women leaders who are determining where the next great discoveries will be made, developing the latest technology to send humanity to the farthest reaches of the universe, and tapping a younger, more diverse recruiting pipeline that is opening doors for future dreamers.

Additionally, Samsung is launching a new “Making History” commercial for its QLED 8K TV, which features footage licensed from ‘APOLLO 11’ and revolves around the moon landing in 1969, when television enabled people around the world to witness one of the most monumental feats of humankind. In 2019, Samsung is making TV history again by pushing the boundaries of technology with QLED 8K, now allowing consumers to watch video content in the highest resolution this category has ever seen. A special 60-second version of the commercial will air during the broadcast of ‘APOLLO 11’ on CNN.

“Cultural context, technological innovation and great storytelling are at the core of our partnerships with Land Rover and Samsung, both tied to this groundbreaking film,” said Michal Shapira, senior vice president of news content partnerships, Ignite, WarnerMedia Ad Sales. “The juxtaposition of this historic moment and the future-forward way it’s brought to life is what makes these brand programs so special, while immersive, culturally relevant branded content is what we at Courageous do best.”

“Samsung QLED 8K is the future of TV technology. Regardless of the source or resolution, it allows viewers to not only experience their favorite contemporary content, but also to revisit some of the greatest moments in history, such as the historic Apollo 11 Moon landing, all in spectacular 8K,” said Jongsuk Chu, Executive Vice President of Visual Display Business at Samsung Electronics. “Our partnership with CNN pays homage to one of mankind’s greatest achievements and celebrates the power of 8K technology and human innovation.”

‘APOLLO 11’ first premiered at the 2019 Sundance Film Festival and was released in theaters by Neon in March. The film is now among the top 31 documentaries of all time in North American box office performance. On May 17, the giant screen version of the film, ‘Apollo 11: First Steps Edition,’ began distribution by MacGillivray Freeman Films to museums and science centers.

‘APOLLO 11’ and ‘Apollo 11: First Steps Edition’ are the result of more than two years of collaboration between Miller’s Statement Pictures and CNN Films, and marks the third collaboration between CNN Films and Miller.  Previously, CNN Films acquired Miller’s DINOSAUR 13 at the 2014 Sundance Film Festival for domestic telecast on CNN; the broadcast won a News & Documentary Emmy®. More recently, CNN Films and Miller produced the documentary short, THE LAST STEPS, about the final NASA lunar mission, Apollo 17. THE LAST STEPS was distributed by Great Big Story.

Founded in 1948, Land Rover designs, engineers, and manufactures its vehicles in the United Kingdom. For almost 70 years the brand has built a reputation for providing its clientele with some of the most luxurious and capable vehicles in the world; whether driving through the heart of the city or traversing the countryside on- and off-road. Today’s Land Rover lineup includes the Discovery and Discovery Sport; Range Rover, Range Rover Sport, Range Rover Velar and Range Rover Evoque. Land Rover is fully engaged with sustainability initiatives and social concerns with continuous involvement in environmental and community programs. For more information, visit the official Land Rover website at www.landroverusa.com.

Samsung inspires the world and shapes the future with transformative ideas and technologies. The company is redefining the worlds of TVs, smartphones, wearable devices, tablets, digital appliances, network systems, and memory, system LSI, foundry and LED solutions. For the latest news, please visit the Samsung Newsroom at http://news.samsung.com.