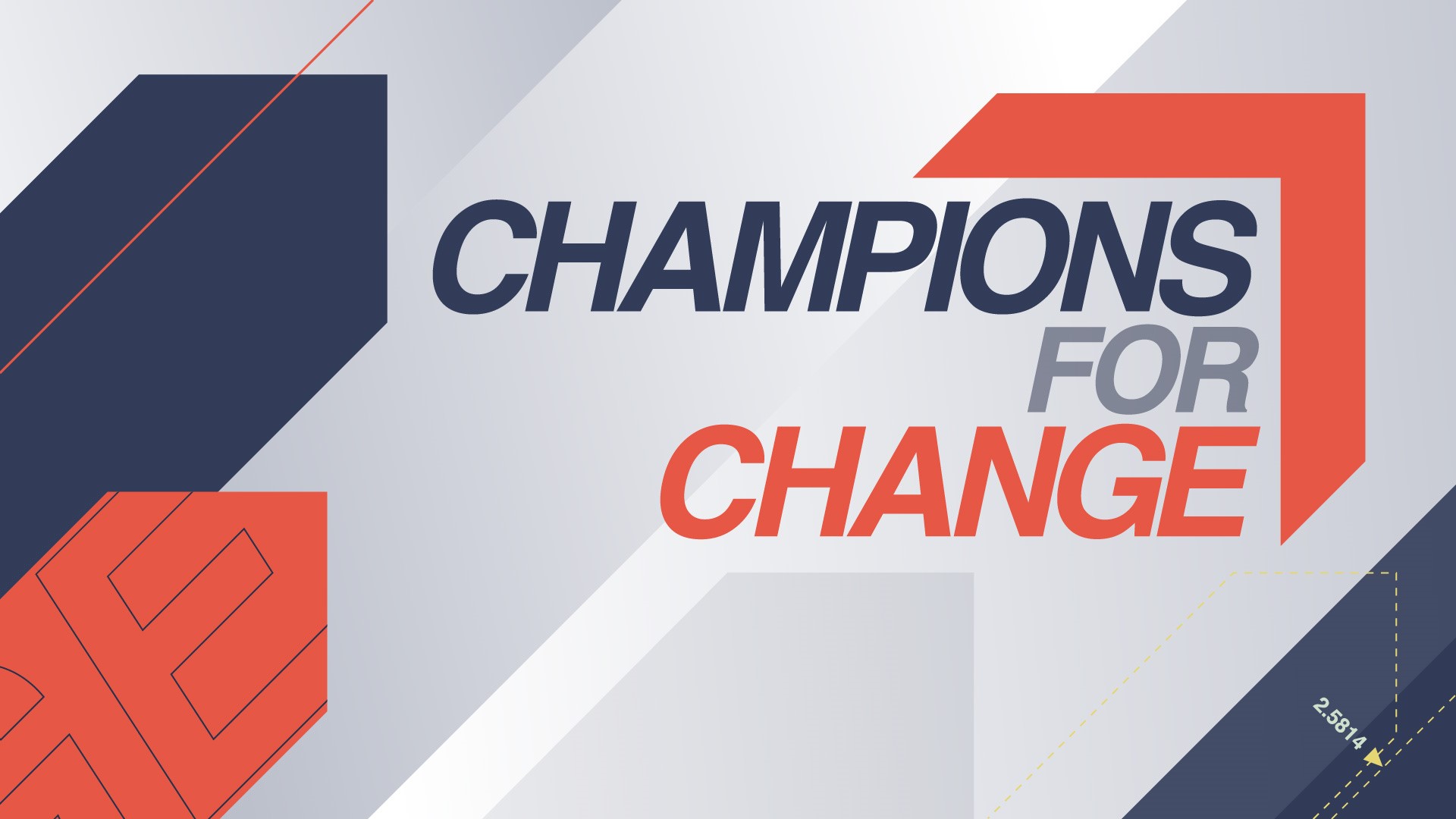 CNN’s Champions for Change Offers Stories of Inspiration and Hope

“Champions for Change” Begings Monday, May 13th Across CNN Programming with a One-Hour Special Hosted by Dr. Sanjay Gupta Airing on Saturday, May 18th at 8pm ET.

Beginning on Monday, May 13th, CNN will air Champions for Change, a week-long special event that features CNN journalists revisiting stories and people that have had a lasting impact on them.

Champions for Change will air as individual segments across CNN programming throughout the week, culminating in a one-hour, prime-time special highlighting the series’ best moments, hosted by Dr. Sanjay Gupta on Saturday, May 18th at 8pm ET.

Below are highlights from the series.

Brooke Baldwin
His name is Michael Render, but the rapper is best known by his stage name, Killer Mike. The larger-than-life performer rose to prominence weighing in on police, race and activism in his songs. But CNN’s Brooke Baldwin got a more intimate take on Killer Mike as he discussed those topics at his Atlanta barbershop. Brooke Baldwin first met Killer Mike in 2014, shortly after the police shooting of Michael Brown in Ferguson, Missouri. The rapper had strong words about society and race relations at the time. Now Brooke explores how Killer Mike’s perspective has changed –and stayed the same– in the years since their first interview. (Monday, May 13th)

John Berman
When CNN’s John Berman first met the Young@Heart Chorus in 2008, the remarkable group of senior citizens was bringing worldwide audiences to their feet.   The chorus members — ranging from 75-90 years young — break all the rules, belting out the most surprising range of rock-n-roll hits.  Today, they go even further: their collaboration with young prison inmates spreads the message that life can be fulfilling whatever the obstacles. (Tuesday, May 14th)

Kate Bolduan
CNN’s Kate Bolduan returns to the South Side of Chicago where almost a decade ago she met a woman fighting to save her community. Diane Latiker’s neighborhood was reeling from gun violence that turned street corner after street corner into makeshift memorials. Diane felt compelled to listen to the plight of young black men and women in her area, and eventually, to act. She sold her TV purchased two computers and opened her home to kids needing homework help. As five kids grew into thousands, she realized just how much her community needs her, and according to Diane, how much she needs them. (Tuesday, May 14th)

Erin Burnett
Erin Burnett returns to St. John’s Baptist Church in Far Rockaway, New York, almost seven years after it was nearly destroyed by Superstorm Sandy.  Located less than half a mile from the Atlantic Ocean, the church was under six feet of water and almost forced to permanently close.  Erin speaks to Pastor JD Williams and his congregation about the support they received after their story was featured on Erin Burnett OutFront and the progress they have made.  Pastor Williams led the effort to rebuild the church, which has become a symbol of the community’s survival and recovery.  (Thursday, May 16th)

Alisyn Camerota
Alisyn Camerota reconnects with two compelling voices that emerged from the 2018 mass shooting at Marjory Stoneman Douglas High School in Florida. David Hogg and his sister Lauren had just survived the attack and were reeling from the loss of several friends when Alisyn Camerota conducted a stunning interview with them. Their words struck a nerve. The Hoggs quickly became key figures in the national reaction to the attack that killed 17 students and teachers. Since Alisyn first met the siblings, their resolve and influence have only grown. Alisyn explores Lauren and David’s rise as political and cultural forces. She also shares intimate details about the ways covering the shooting impacted her personally.  (Monday, May 13th)

Anderson Cooper
In 2011, journalist Tim Hetherington was killed in a mortar attack in Libya.  He was doing what he loved, covering conflict zones and telling the stories of the people affected by war.  Tim was Anderson Cooper’s friend. They worked together in Afghanistan just a few years before he was killed.  Tim’s death inspired fellow journalist and friend Sebastian Junger to start a foundation that trains journalists to stay safe in war zones. Anderson and Sebastian sit down to talk about Tim’s life, his legacy, and the dangers journalists face around the world.  (Monday, May 13th)

Chris Cuomo
Almost twenty years ago, as a reporter for Good Morning America, Chris Cuomo met Mattie Stepanek, a little boy-poet fighting a rare and devastating disease.  Mattie’s message of peace and hope after 9/11 earned him a following around the world. Cuomo and Mattie developed a special bond. After his passing, Cuomo says he almost  quit journalism. Fifteen years after the boy’s death, he reunites with Mattie’s mother Jeni, who works tirelessly to advance her son’s legacy as “chief peace officer” of the Mattie J.T. Stepanek Foundation.  (Tuesday, May 14th)

Dr. Sanjay Gupta
In 2000, Kevin Hines tried to end his life by jumping off the Golden Gate Bridge. He miraculously survived and returned to the iconic San Francisco landmark in 2003 with CNN Chief Medical correspondent Dr. Sanjay Gupta, to open up about his struggle with mental illness. Kevin has since dedicated his life to suicide prevention, traveling the country to encourage anyone and everyone who is suffering “brain pain” that it’s always better to #BeHereTomorrow.  (Wednesday, May 15th on AC360)

Poppy Harlow
When Heather Abbott lost her leg in the 2013 Boston Marathon bombing, it seemed her passion for dance, fitness and high heels was over. But when CNN’s Poppy Harlow first interviewed her in the weeks after the attack, it was clear Abbott was not staying down. Six years later, Poppy Harlow met back up with Heather and found the inspirational woman back in full form, fighting to make life-like prosthetics available and running a foundation that helps others like herself feel whole again…and beautiful.  (Thursday, May 16th)

Don Lemon
The Oliver Scholars program guides and challenges promising students in underserved communities and gives them a shot at elite universities. Last year, CNN’s Don Lemon introduced viewers to the outstanding kids striving and thriving through the program. This year, Lemon follows up with an alumnus who is finishing up her freshman year at Middlebury College and talks to Oliver Scholars’ new CEO, Dr. Danielle Moss.  (Wednesday, May 15th)

Jim Sciutto
As an al-Qaeda fighter in Afghanistan, Hanif Qadir saw first-hand extremism’s violence and destruction. He quickly realized it was not for him and returned home to London. Ten years ago, Jim Sciutto first met Qadir who was running a program to keep young men from going down the path of radicalization. Now Jim follows up with Qadir’s personal war on terror, its successes and challenges.  (Tuesday, May 14th)

Bill Weir
CNN’s Bill Weir catches up with longtime friend and best-selling author Dan Buettner in Fort Worth, Texas. Bill last met Dan during an episode of CNN’s Original Series The Wonder List – in Ikaria, Greece, one of five so-called Blue Zones he identified in his 2008 book by the same title. Blue Zones are places where active, healthy lifestyles are common and so too are people living beyond the age of 100. Dan meticulously catalogued the factors that contribute to the robust health in these communities. Through his Blue Zone Project, he is now bringing that research home to help American cities promote healthier lifestyles.  (Monday, May 13th on CNN Tonight)

On CNN’s digital platforms, anchors will reveal their thoughts on why it’s important to challenge the status quo and how they sometimes have followed uncommon paths. To see all the stories and videos, go to CNN.com/champions.  Champions for Change will stream live for subscribers on May 18th via CNNgo (at CNN.com/go and via CNNgo apps for Apple TV, Roku, Amazon Fire, Chromecast, Samsung Smart TV and Android TV) and on the CNN mobile apps for iOS and Android. The special will also be available the day after the broadcast premieres on demand via cable/satellite systems, CNNgo platforms and CNN mobile apps.