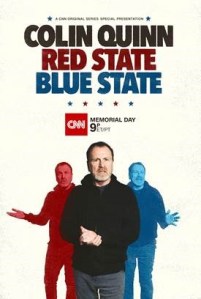 Colin Quinn: Red State Blue State, a CNN Original Series Special Presentation written by and starring stand-up comedian Colin Quinn, will debut on Monday, May 27, at 9 p.m. ET/PT on CNN.  In the hour-long presentation of his critically-acclaimed Off-Broadway show, Quinn brings the funny tackling the absurdities, hypocrisies and calamities on both sides of the political divide.

“We are always looking for new ways to engage our viewers by exploring the issues that are most important to them,” said Amy Entelis, EVP for Talent & Content Development, CNN Worldwide.  “Colin Quinn’s show is a smart political satire that speaks to what is dividing our country.”

Colin Quinn: Red State Blue State will stream live for subscribers the day of its premiere via CNNgo (at CNN.com/go and via CNNgo apps for Apple TV, Roku, Amazon Fire, Samsung Smart TV and Android TV) and on the CNN mobile apps for iOS and Android. It will also be available the day after the broadcast premiere on demand via cable/satellite systems, CNNgo platform and CNN mobile apps.

Colin Quinn is a stand-up comedian from Brooklyn (okay, Park Slope). From MTV’s “Remote Control” to “SNL” to Comedy Central’s “Tough Crowd with Colin Quinn,” Mr. Quinn is not one to take a hint and bow out gracefully.  He’s been on Broadway with “Colin Quinn: An Irish Wake” and “Colin Quinn: Long Story Short” (also an HBO special) and Off-Broadway with his show “Colin Quinn: Unconstitutional” (available on Netflix) and most recently “Colin Quinn: The New York Story,” directed by Jerry Seinfeld (also available on Netflix).  Additional credits include “Trainwreck,” “Girls,” and his web series “Cop Show.” His first book, “The Coloring Book,” is now out from Grand Central Publishing.  In January 2019, Quinn premiered his newest one-man show, “Red State Blue State,” to rave reviews at The Minetta Lane Theatre in New York.