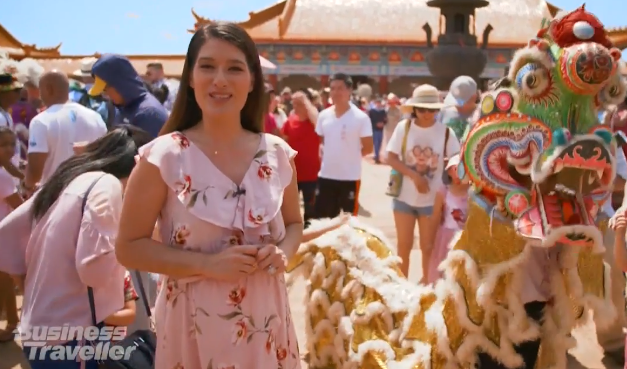 This month’s programming highlights on CNN International, including shows such as Business Traveller, Africa Avant Garde and Feast on Dubai:

It was a seismic shift felt across the globe when China surpassed the U.S. as the biggest business travel market in the world. Now that this powerful travel influencer is on the move, its sights are increasingly set on Africa. Chinese investment on the continent is making Africa a go-to destination for Chinese business and leisure travellers.

During the programme, host Eleni Giokos meets the CEO of South African Airways Vuyani Jarana who explains how seamless connectivity between China and Africa has allowed for growth on the continent. Giokos also speaks to South Africa’s Tourism Minister Derek Hanekom who aims to capture a larger piece of the Chinese market.

Meanwhile, Richard Quest speaks to James Asquith, the youngest person to travel to all 196 countries on the planet.

In the first episode of the new CNN International series exploring contemporary African arts and culture, Africa Avant-Garde meets a range of influential living artists to celebrate the best of modern African art.

In the UK, CNN meets Yinka Shonibare CBE who discusses his work and his plans to build a studio in Lagos. In Munich, the programme meets El Anatsui ahead of a huge exhibition in one of Germany’s most important museums, Haus der Kunst. In Senegal, painter Kehinde Wiley explains why he is spending so much time in Dakar, and in Cape Town CNN learns about the key people behind the astonishing Zeitz Mocaa.

With an incredible record of 50-0, Floyd Mayweather Jr. is considered one of the world’s best pound for pound boxers. The 41-year-old came out of retirement in 2017 for his successful and high-profile bout against UFC star Conor McGregor – making him more than $275 million in just one night. Not surprisingly, Mayweather topped the list of Forbes’ highest paid celebrities of 2018.

On this month’s episode of Talk Asia, Floyd “Money” Mayweather speaks to CNN in Tokyo about his career as well his childhood, influences and life outside the boxing ring.

On Quest’s World of Wonder, host Richard Quest travels to fascinating places and meets interesting people to learn about the DNA of a city.

This month Richard Quest travels to versatile Hong Kong – a perplexing city which defies geography, where the sky seems to have no limit in real estate or at the race track. It’s a place where food can be history for the mind and a place melding Eastern and Western cultures, as it adapts to a changing future.

On Travel Trends India, CNN journeys across the country. In Nainital, Uttarakhand, the programme explores a resort town which was built around a mango-shaped lake, known for its recreation and mythology, and offers panoramic views of the Himalayas. During the visit CNN finds respite at The Retreat, a 150-year-old former British tea plantation, in neighboring Bhimtal.

In Rajasthan, or the “Land of Kings,” the programme explores the lavish Umaid Bhawan Palace in Jodhpur, one of the last grand palaces to be built in India. Its current custodian is the Maharaja Gaj Singh, whose royal family occupied the palace’s 347 rooms since construction was finished in 1943.

Next, CNN meets with Vintage Rides, a tour company that combines the love of the ironically Indian Royal Enfield bikes with a passion for adventure travel. From there, Travel Trends India travels to the Udaipur World Music Festival, an annual gathering of world-class musicians from around the globe.

Lastly, at the Jim Corbett National Park in Uttarakhand state CNN explores the 400 different species of flora and fauna, thriving against a backdrop of hillscapes and grasslands.

This month on Winning Post, CNN travels to the Andes for one of South America’s most famous horseraces – the Gran Premio Latino Americano. This year the event is hosted at the Club Hipico in Santiago, Chile.

Host Aly Vance begins her journey, from the saddle, exploring Chile’s stunning surroundings and its historic affinity with horses. Her tracking guide is one of the Chilean “Arrieros” – originally herdsmen possessing unique horsemanship skills who help provide a glimpse into one of the most traditional sectors of society.

Next, Vance is given a tour of the Solaris farm – one of the most influential in the country – which was established in 1987 by Don Alberto Stud with the intention of protecting Chile’s love of thoroughbred breeding and horseracing. Here, Vance also meets the entries that might inspire a younger generation to get involved, by winning this year’s 35th renewal of the Gran Premio Latino Americano.

CNN travels to Singapore, an island city-nation that’s been defined by its transformation. During the visit, Iconic Singapore meets wakeboarding champion Sasha Christian who is stepping out of her own comfort zone as she tests her wave riding abilities with “Fearless” Flowrider Alysha Rizwan.

Next, CNN learns to ‘fly’ with indoor skydiving daredevil Kyra Poh – an aerial acrobat who describes how she’s taking on the big boys in the high-flying sport.

Iconic Singapore also explores how the orderly streets of Singapore have become breeding grounds for some of this city-state’s most artistically daring, culture-shaping creatives while getting a master’s course on how collaboration can lead to transformation with graffiti icon Antz.

The programme also meets celebrity DJ and elder statesman of electronic music, KoFlow who is pushing his musical boundaries, testing out new genres in the city that offers an eclectic array of options.