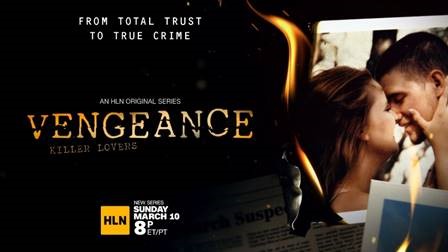 HLN’s new 10-episode Original series, VENGEANCE: Killer Lovers, covers stories of revenge and betrayal carried out by the people seemingly most trusted by each of the victims–their lovers. These true-life mysteries will focus on the criminal’s motive, and explore how the victim and lover met, the deepening relationship, the perceived betrayal and the obsession that led to the deadly act. Each one-hour episode takes viewers through the twists and turns of the investigation, the arrest, and the final verdict that ultimately leads to justice.

VENGEANCE: Killer Lovers will also stream live for subscribers via CNNgo (at CNN.com/go and via CNNgo apps for Apple TV, Roku, Amazon Fire, Samsung Smart TV and Android TV) and on the CNN mobile apps for iOS and Android.

When Rhoni Reuter, the pregnant girlfriend of Chicago Bears legend Shaun Gayle, is shot to death in her home, investigators are faced with a long list of romantic rivals as suspects.

Sandee Rozzo is preparing to face her attacker at court when she’s gunned down in her garage. The culprit seems obvious, but as detectives dig deeper, they learn nothing about this case is cut and dried.

As police respond to a harrowing 9-1-1 call from a man pleading for his life, they are led on the trail of a revenge plot more disturbing than the victim’s worst nightmare.

Barry Odom wasn’t one to make enemies, but after he’s executed just outside his apartment complex, investigators uncover not one but two love triangles, leading them to the front door of a scorned lover who was willing to kill for love.

After Mary Ann Langley finds her husband James nearly burned to death in their home, investigators must race to determine if it was an accident or assault before they lose him.

VENGEANCE: Killer Lovers – ‘Til Death Do Us Part (April 14)

On the surface, Shannon and Eddie Baugus seemed to have the perfect marriage until a deadly confrontation exposed a dark history of domestic abuse.

After Ann Huxley learns that her ex-husband has been found dead in the warehouse where he works, a deadly get-rich-quick scheme begins to unravel.

Cunning and beautiful, Georgina Symonds knew how to bend the will of men to her advantage. But after the young mother goes missing, police discover she pushed one man fatally too far.

Jane Andrews appears to be living the dream life with her high society beau, Tom Cressman, until he’s found stabbed to death in their home.