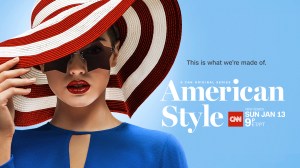 The premiere episode explores style in the 1940s and 50s, how World War II and Hollywood helped create America’s own fashion identity, and the introduction of new trends including the bikini and zoot suit. The second episode explores the style of the ‘60s and ‘70s as the youth culture comes into its own, and fashion, like politics, goes to extremes. The remaining two episodes, airing Sunday, Jan. 20, at 9 and 10 p.m. ET, examine the history and style of the 1980s and 1990s to 2000s.

American Style will stream live for subscribers on Jan. 13 and Jan. 20 via CNNgo (at CNN.com/go and via CNNgo apps for Apple TV, Roku, Amazon Fire, Chromecast, Samsung Smart TV and Android TV) and on the CNN mobile apps for iOS and Android. The episodes will also be available the day after the broadcast premiere on demand via cable/satellite systems, CNNgo platforms and CNN mobile apps.

Vox Entertainment is Vox Media’s Los Angeles-based studio that develops, sells, and produces premium, non-fiction programming for TV and OTT platforms. As the entertainment division of Vox Media, Vox Entertainment’s shows are inspired by great journalism, next-generation talent, and deep curiosity about the world. In 2018, Vox Entertainment premiered a weekly docuseries, Explained, on Netflix with Vox, which has been picked up for a second season; a true-crime sports docuseries, Foul Play, on Verizon’s go90 platform with sports network SB Nation; a food and travel docuseries, No Passport Required, for PBS, as Eater’s first broadcast debut; and a provocative weekly series addressing the issues dividing our nation, Consider It, for Facebook Watch, hosted by Liz Plank. Most recently, YouTube greenlit a Vox Entertainment produced series that has a groundbreaking format and features a team of Vox reporters who answer viewer’s biggest questions about the news and the world around them.0